So what am I doing at midnight on Hogmanay? Am I drunk?

No. Not a drop has been taken. In fact, I may be on the wagon at present - the stuff isn't really agreeing with me. Red wine is currently off the list, since it's like drinking razor blades. Tea and a scone is fine.

Am I feeling festive?

Not bad. My wife went to bed fairly early, and the Polish family next door are having a party in their garden (South-East Scotland, 1st January) which is going to disturb the peace for a few hours yet. I have taken the opportunity to do a bit more solo rules testing - the knotty issue of Combat in my WSS rules. It may be a little unusual as a celebration, but it's going OK - I've got about 5 new tweaks or clarifications thus far, so that's useful. 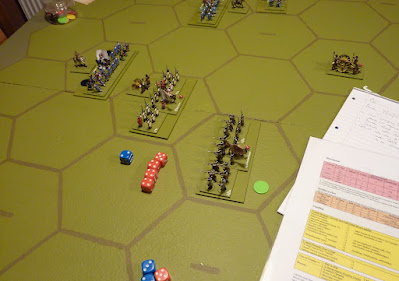 Examples? Well, for one thing, a unit of Foot which is forced to take a double retreat will now lose any attached battalion gun in their haste. For another, a unit being charged from the flank, while still allowed to make an emergency change (if they pass a test), will no longer be allowed to swing around on the spot if they are already engaged with (or adjacent to) an enemy unit to their front. I think we used to use the term "pinned" once upon a time. And there's more similar; twiddly stuff, but OK.

I'm also getting the hang of the Combat bonuses - what you get an extra dice for - and it's actually as easy as I had hoped it would be. It's just a matter of practice...

Anyway, Billy No-Mates sends you best wishes for the New Year. All the very best to you.