Since Saturday (New Year's Day) was bright and not too cold, and as I had no possibility of a hangover, I went for a drive to the town of Kelso, in the Scottish Borders. The place is around 50 miles from here, but it's a town I haven't visited for years, and I always liked it.

The Borders region has some very attractive towns, and I used to visit there quite often; my first wife's family came from St Boswell's and from Coldstream. It's a sparsely populated area, very agricultural, but there is a lot of history around those parts. Most of the towns are on the main modern routes into England - the A68 (to Jedburgh and Carter Bar), the A7 (to Hawick and Carlisle) or the A1 (to Berwick and Newcastle), but, although it always had an important strategic position on the mighty River Tweed, people don't normally visit Kelso unless they are going to - erm - Kelso.

My first father-in-law took me to see the sheep sales there, on a Saturday morning long ago, and subsequently I was a guest at various family functions in the town over the years, mostly at the Ednam House hotel (I think there were family connections!).

One effect of the pandemic has been that I have become even more of a recluse than I was before, and I've been nurturing an unreasonable urge to visit some of these old Borders haunts, if only to prove that they still exist!

On Saturday, then, I made a brief but enjoyable visit to Kelso, which was once the county town of Roxburghshire, by the way. Not much traffic, and I didn't get breathalyzed once (I was quite looking forward to it...). I took only a few photos, since the visit itself was the main objective, but I thought they might have some appeal in my blog. When we can travel about again, I recommend the Scottish Border  country as a place worth a visit. From Kelso it's only a few miles to Melrose, site of another great abbey and also Sir Walter Scott's military collection at Abbotsford... 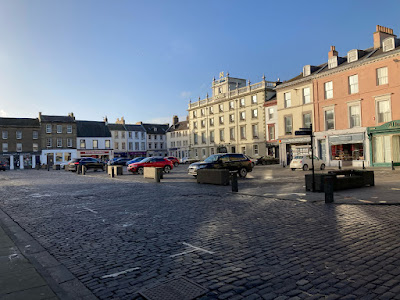 New Year's Day in the main square - never seen it so quiet - it was certainly busier back in the days of the sheep sales. The Cross Keys hotel is something of a local institution. The town, as you see, was shut. 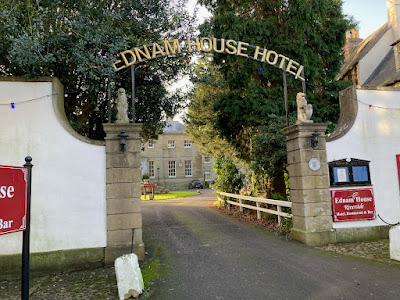 Another hotel - this is the Ednam House, where I've attended numerous weddings, wakes, 21st birthdays and Christmas dinners, back in another century. My first wife's uncle was once captain of Kelso's rugby team, and a Scottish international (traditionally the area is famous for rugby, in addition to wars and sheep-stealing), so the family were local celebrities! 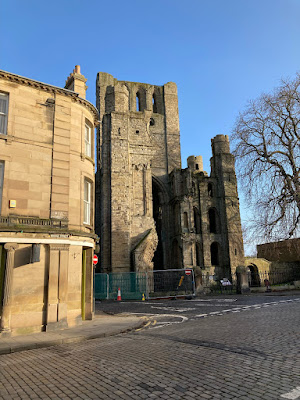 Kelso has a famous abbey - I'm afraid this is a very poor photo of it. A great area this for ecclesiastical buildings - Dryburgh Abbey is just a few miles away - where I think Earl Haig is buried. 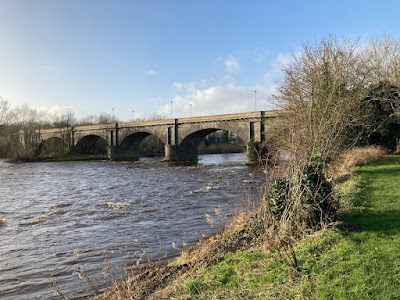 The town has a very fine bridge over the River Tweed, which is not the border with England at this point, though it will become so not far downstream. 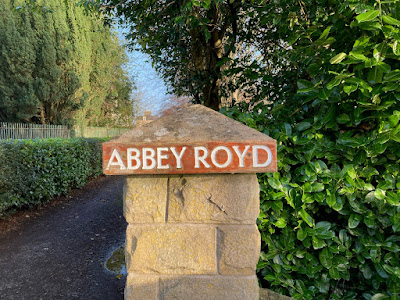 Apologies for this one - it amuses me to think that this may be a must-see site for visiting Beytles fans. I am, as ever, easily pleased by such silliness. I don't know what a Royd was, but Kelso Abbey obviously had one

Since I was asked about the matter, I did some reading and now realise that the Kelso Ram Sales are still going strong - here's an aerial shot of a recent one [used without permission, of course]. The Events Centre is on the other side of the river from the town - you can see the bridge and the Abbey in the background, and you can see a few modern suburbs in the right backround, south of the Tweed. Maxwellheugh has an industrial park - my first wife's family owned the sawmill in Spylaw Road, south of the river - long gone. 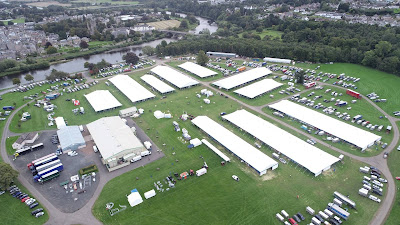