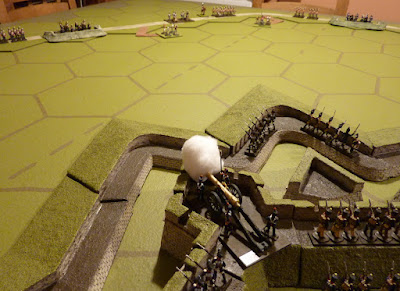 View from the fortress, with the British First Parallel in the distance

It took me about a day and a half elapsed to fight my test game to a result. I learned a lot, especially about Vauban's Wars, with which I made a rather daunting start, but which was flowing a lot better by the second day. Although I'd read the book a few times, there is a lot to learn. There is no substitute for just memorising the Combat and Defense values of each unit type - once you've mastered that, things get a lot easier, but for the first two turns I had to read the details of everything that happened, which is really heavy going. After that - after I'd seen most of the things which could happen - things picked up.

Vauban's Wars is Piquet-based, which means it's a very prescriptive, card-driven game, aspects which some people find unappealing, but it is a practical approach, especially for a solo game, and it generates a nice narrative as you go along (or, alternatively, the player(s) will build their own narrative to explain what happened).

My scenario involved an attack on the (fairly modern and tidy) fortress town of San Juan el Timido, somewhere near the Spanish-Portuguese border, in the year 1811. The French commander was the well-connected and irascible Corsican, Général de Division Léonardo, Comte Cindérella, supported by the very capable (though little seen) Général de Brigade Dandini. The fortress has 3 bastions on the table.

Lassiter's plan was to develop a 2nd Parallel covering the whole south side of the fortress, and then to construct two short 3rd Parallels with a gap in the centre - the intention being to effect a breach on the South-Eastern Bastion (the one on the right from the British viewpoint.

I'll start with a spoiler: the British had such rotten luck during the first 3 game turns (a turn is about half a week, if you are comfortable with such an idea) that any sensible general would have abandoned the siege and tried again another time. In a campaign context, this would have been a no-brainer, but such a proceeding would be of little use for my apprenticeship with the rules, so Lassiter was encouraged to stick with it. 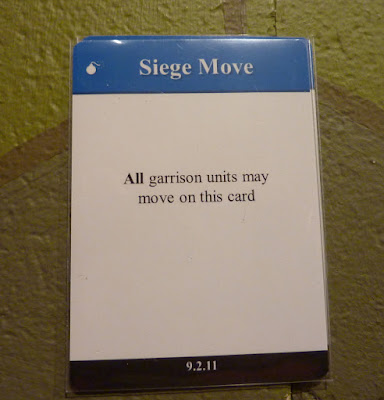 First priority for the French garrison was to shift their infantry into the town, and move the heavy field guns on the walls, on to some specially constructed platforms (or "doofers" in my house jargon) 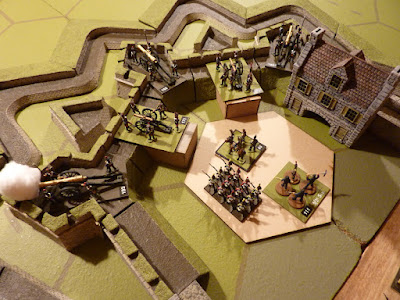 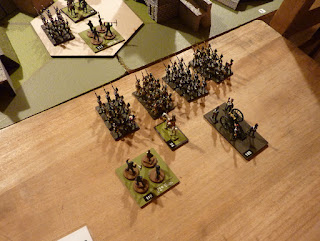 Something of a minimalist town, I'm afraid, I had all sorts of plans to paint up the add-on extension board in the regulation baseboard colour, and lay out buildings, gardens and a monastery to double as a powder magazine, but the green paint had gone off, so minimalism it is. Sorry about that, but there was a war on. Here you see Dandini in the Rallying Point in the town, with 4 line battalions, a light howitzer and the second company of sappers 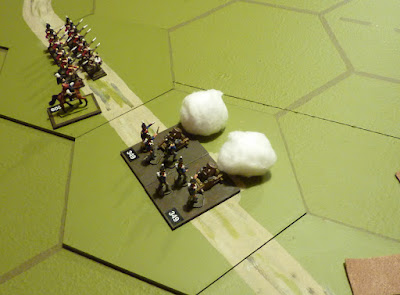 Having no cannons within range until such time as the emplacements in the Second Parallel were constructed, the earliest British efforts were concentrated on forward sapping, and a couple of heavy mortars lobbed a few shells into the town, to keep them on their toes. Trivial effect.

There was a strangely hushed period - the French fortress guns had a few shots at the sappers at work on the approaches, but they were a long way away, they were in good cover and sappers are a poor sort of target anyway. Both generals (being inexperienced!) were nervous about wasting powder, which turned out to be a mistaken approach - the supply of powder is more adequate than you would think, and on balance the rules make it more efficient to give plenty of fire. Since Cindérella was the better of the two commanders, he tended to win most of the initiative rolls (having a D12 against Lassiter's D10), but since the British were making such poor progress he often allowed them to go first, in the hope that the Opportunity Fire rules would give him something to fire at as they approached. 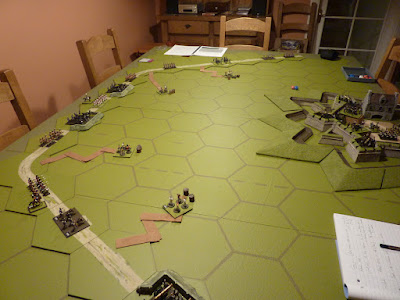 The British working on their forward saps (brown felt, as recommended by Gonsalvo!), still fairly safe from the artillery on the walls 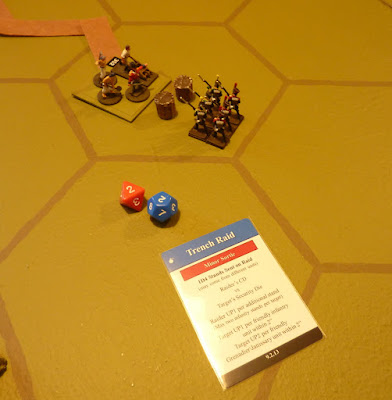 The French turn up a "Trench Raid" card, and bring into action a battalion of elite troops they had placed specially in the fort. The first two such raids seemed very effective - two parties of sappers were sent scrambling back to the 1st Parallel. One of the two raids was very closely contested - the French grenadiers were armed with (in Piquet jargon) a D12+1 (blue), and the sappers had a D8 (red) - the "+1" bit on the blue die was enough to scare away the sappers - here's an exciting war photo of the dice action 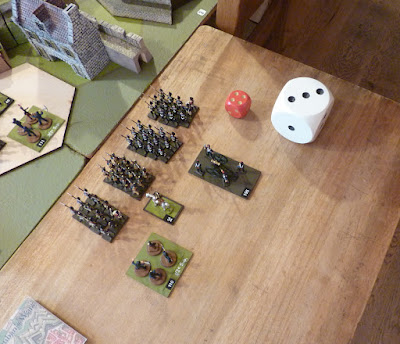 The markers in the town indicate that we are on Turn 3 (about a week and a bit after the completion of the 1st Parallel), and the accumulated damage caused by mortar bombardment is 4pts, which is insignificant 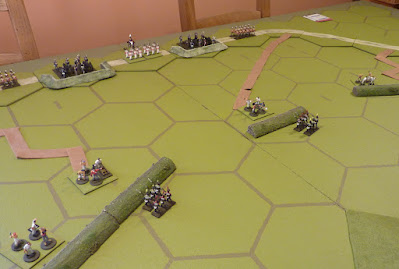 At this point things took a turn for the worse for the British; encouraged by their success with Trench Raids, the French tried again. In the absence of protective infantry, the sappers were badly exposed, and this time the two attacks resulted in the elimination of two sapper companies (out of an army total of four companies!). This was not going to help much with getting the 2nd Parallel operational. 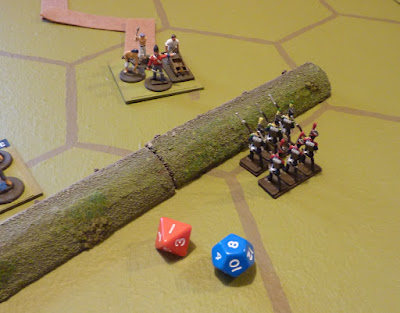 Here's a close up of one of the Trench Raid disasters for the British - wiped out. In itself, this is a nuisance, but should be recoverable, since the CinC can create new Sapper teams by converting infantry companies 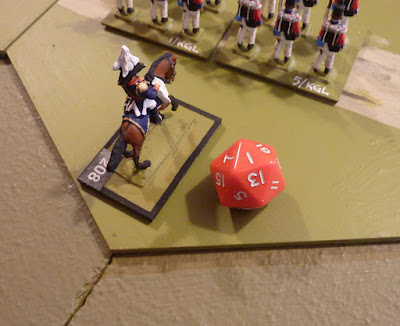 Not so fast. On the same initiative, General Lassiter, who has to check his health and safety as part of the "Leadership" card, is laid low by a roll of 1 on a D20. Since there was no firing going on, so as you would notice, I have to assume that he fell off his horse, or was just taken ill. Whatever, the British now had no CinC, until the next Leadership card came their way, so there were quite a lot of things which they now couldn't do, such as winning initiative rolls, and recovering (rallying) losses - oh yes, and they couldn't replace the vanished sappers with infantrymen... 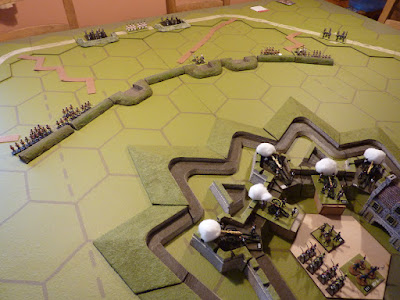 And so, being sort of stuck for the moment, the British brought forward most of their infantry, to protect against further Trench Raids. The French artillery - three 24pdr fortress guns plus two 12pdrs, started knocking lumps out of the British infantry, and the British morale was sinking fast 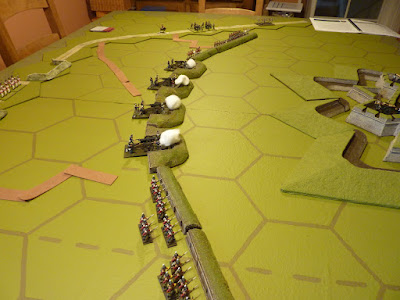 Eventually, the British 2nd Parallel was seen to shape up, emplacements were dug, big guns installed, and they started to fire on the French artillery, very inaccurately to begin with. 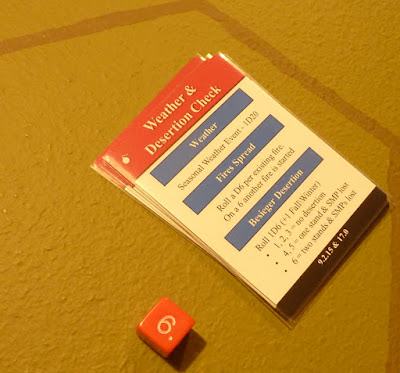 Almost immediately after this, the weather became foggy for the next turn, so any serious fire was not possible. The British infantry also had a slow but steady stream of deserters 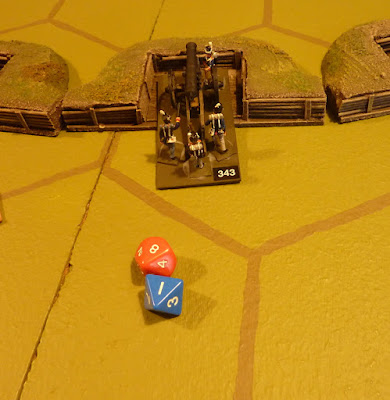 When the fog cleared, there was a new CinC (Lord Bakewell), replacement sapper units were created, and the British 24pdrs eliminated the central fortress gun and badly damaged one of the French 12 pdrs 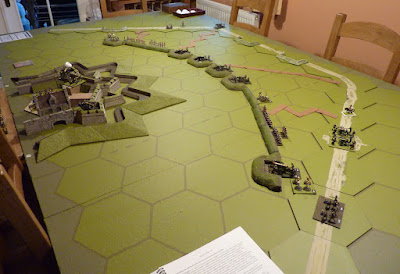 In a sensible world, the British, who had no chance of making a decent attempt at a 3rd Parallel and were in any case running out of men and morale, should have abandoned the siege, but in the interests of gaining experience of the game I pressed on 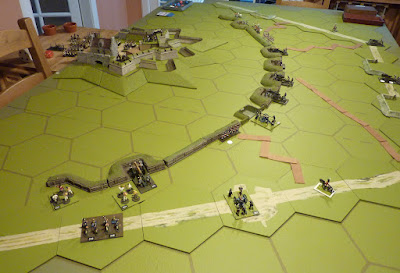 At the end of Turn 6, some 3 weeks after the completion of the First Parallel, the British ran out of morale points, and they had lost. The starting position had been 26-14 to the Brits - at the end it was 0-8, as you see 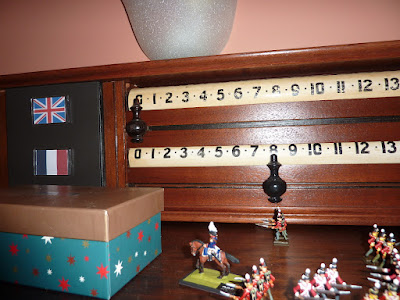 In fact, they were doomed anyway, since one of the Unique Event cards turned up had scheduled the arrival of a relieving force for the French during Turn 8. The French knew about this, the Gamemaster (that's me) knew about it, but strangely the British commander had no inkling of it. The British spies had been very unproductive - right from Turn 1, when an attempt to sow insurrection in the town had failed and the spy was arrested and shot. A lack of intelligence, undoubtedly, in several senses, but also a bucketful of bad luck and dreadful dice! 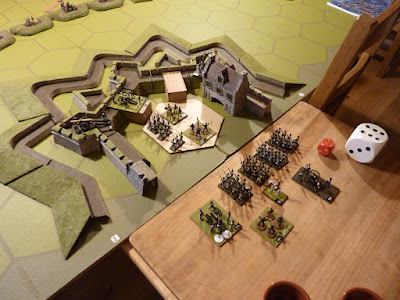 The final state of the French - they had lost one fortress gun, destroyed, suffered damage to a heavy field gun (with white markers), and the one element of damage they had suffered to the match-winning elite battalion had been recovered at the first attempt by Cindérella. They had plenty of food and powder left, too
***** Late Edit *****
I had a couple of emails last night which mentioned the fact that my test siege game may have produced a result (technical knockout?), but didn't get to blowing holes in walls or any of that stuff that one normally associates with sieges. Agreed - the game only got as far as the 2nd Parallel, at which stage shooting at walls is still some way off. The test game was invaluable because it gave me a first serious workout of the rules; I've now seen most of the cards in the pack, and learned a lot about convenient ways of keeping track of the game without written notes and without covering the room in counters and Post-It stickers. One of the more alarming things about Piquet is the potential for clutter - I have a problem with clutter in any form, and it is not an essential part of this game, if you go about it carefully.
After a laboured first couple of turns, my enthusiasm picked up as I became more confident of carrying most of the rules in my head. The lack of wall-bashing is a big gap, however.
It says in the VW manual that you can, if you wish, shorten the game by starting with the Second Parallel built, to whatever degree of completeness you wish, and it offers suggested adjustments for Powder and Food Levels for this later start. Sounds good to me. I believe that the 2nd Parallel, as supplied at the start, probably needs a little careful design, to set the game up for the demolition stage. I'm keen to have a shot at this - it would be interesting to pinch some design ideas from real sieges (or bits of them). Anyway, good so far, and a further test game should appear here once my wife has recovered from the trauma of every scenery box I have being dragged out of the cupboards. I'll have a better idea what I'm doing next time.
For anyone who has read this far, my appreciative thanks. There are a couple of things which I haven't found in the rules yet - storm by escalade may be an example, though I'll no doubt receive a note pointing out that it's on p44. I'm still not altogether comfortable with all the digging being done by specialist sappers, but will think further on this. The game works nicely and, like all Piquet games, is intended to be tweaked as required.  My compliments to Eric and Peter and the other guys who worked hard and long to get VW published - a splendid effort.
********************* 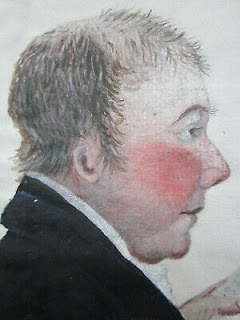 Lassiter (in later life, as Governor of St Kitts)