This is good fun, and a rather different way to spend an evening, but there is still a lot to do to prepare for my solo "practice" siege using Vauban's Wars (VW). After a couple of (short) evenings, I've worked my way through the official start-up checklist from the manual, decided on the forces involved (points-based purchase system), and set up the battlefield (approximately). I still have a lot of stuff to work on - jobs like photocopying and laminating the game turn markers, and making up damage indicators from gravel and PVA glue. Once I have these things in stock, the overheads of putting on a game should be much reduced. I've also laid out my stock of trenches and gun emplacements (mostly from Fat Frank) on a series of canteen trays - it's a bit like a weird tray-bake.

To be going on with, for this evening, here are some photos of the field, and the checklist, including the OOB. 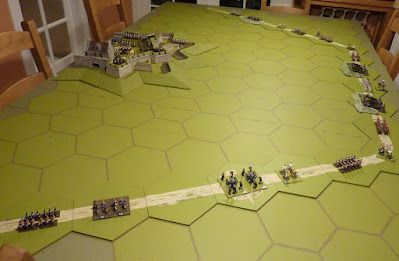 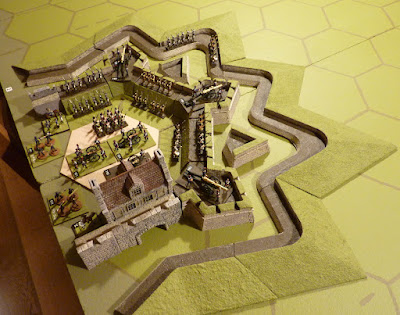 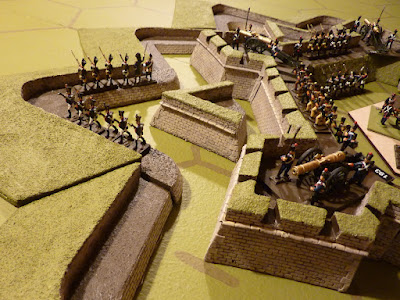 The besieging troops are laid out along the First Parallel. Yes, it does look like a road, but it is a proper trench - since it is out of range of the fortress, and cannot be the objective of a Sortie or a Trench Raid, and since it is assumed to be complete, to get the game off to a flying start, the convention is that it just looks like a road, but if you screw your eyes up a bit it will look fine. There will be plenty of digging coming up, that's for sure. I'm working on a positioning convention for infantry on the walls or covered way - I may need to revisit this, but at present the rule will be that bases touching the parapet are on the firing step, and thus are exposed and may fire. If they are down below then they are in cover and may not fire. OK - I'm on it.

If it's possible, I'd like to add a small table extension behind the fortress section, to include part of the town, including a Rallying Point. I'd also like to add a little Artillery Park for the besiegers, outside the lines (if only to add a little scenic value to what is a very bleak terrain!).

I've used my old Terrain Warehouse fortress with the supplied glacis pieces, which is pleasing, but does place restrictions on the design of the fort. I may (reluctantly?) opt to use trench pieces to lay out the glacis - most VW users seem to do this, and what it loses in visual brownie points it probably makes up for in flexibility.

I'll knock together another post when I've made sufficient further progress to justify it.

More soon - I think I've got an evening or two of this prep work before any shooting starts!

3-bastion fortress - no mining (ground too wet or something)