Sieges: Getting Organised (a Bit...)

For a while I've been intending to take advantage of the strange world of Covid limitations and do some solo work on getting the hang of Vauban's Wars. Siege games are, by definition, very dependant on all sorts of fancy scenery and hardware, and it is always very easy to find assorted reasons why this is not the ideal time to have a go. Well, that's long enough.

I now plan to have a solo bash at a Napoleonic siege game, so I'm scratching around trying to collect all the bits and pieces I need. Some of this is trivial work, to be honest, it's just a question of getting down to it.

Today I have a case in point. The starting set-up for my proposed training game requires the British to have a couple of heavy mortars. Now I have odd bits of artillery around the place, and I have some spare soldiers, so it was a simple matter to put together the required mortar battery from some old Hinton Hunt gunners and a couple of very scruffy Hinchliffe mortars I got as a make-weight in an eBay parcel. Here they are - not beautiful, but absolutely fine - cross them off the to-do list. Ready for duty. 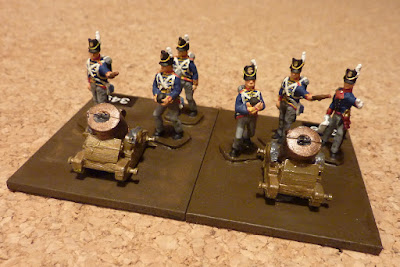 There is a new approach evident here - previously I put a lot of effort into making up smart siege trains for the French and the British in the Peninsula. I now also have pieces for a proposed Spanish train, including some fortress guns, and I'm starting to collect items for WSS sieges. My new approach is that I shall paint the ordnance pieces in nondescript colours wherever possible, and make up crews of various nations who can "borrow" spare kit as needed. This is the first such - the scabrous mortars here are simply BluTacked onto the bases, so they can be loaned out to another army, in a different period if required, or they can even be replaced by more beautiful examples if the dreaded Creeping Elegance ever catches up with my siege projects.

Anyway, enough said. I retouched and based these chaps (ex Eric Knowles gunners, by the way) while listening to the Crystal Palace vs Liverpool game on the radio. Easy peasy. The British now have siege cannons, mortars (both heavy and Coehorn), various howitzers and sappers. I even have some new, specially sized and based units of foot, rescued from spares boxes for duty on sieges. And still the wonder grew.

I'll put some notes here on the starting set-up for my Vauban's Wars solo game in a day or two.