Hooptedoodle #429 - How to Keep an Idiot Entertained

Like most of Britain, we have been in a heatwave again here. Being Scotland, it is not so severe as further south, but still oppressively hot - especially uncomfortable at night for those of us who are not accustomed to it.

Yesterday was a lot cooler. I live on a farm which is on a headland at the junction of the Firth of Forth and the North Sea, and a quirk of the local geography is that our heatwaves usually have limited duration. After a few days of high temperatures, we get sea mists (haars) rolling in and the temperature drops sharply. There are many occasions when we hear on the radio about the rest of Britain basking in glorious sunshine, while we are tripping about in the gloom, with sweaters on.

Yesterday the temperature dropped a lot - I believe the maximum here was 17degC, and the minimum was around 12degC, so, though dull and misty, it was pleasantly cool. Suitably invigorated, I made a special note to step out in the evening for a little adventure. The RAF's Red Arrows display team were to appear, flying over the Castle Esplanade in Edinburgh at 21:00 to open this year's Edinburgh Military Tattoo. 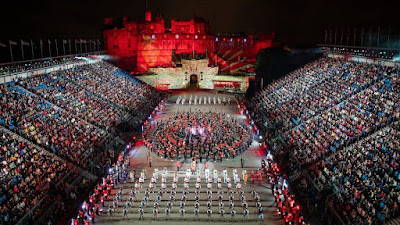 No, I had no plans to go into Edinburgh - Heaven forfend! The team would be flying just to the west of the village of Whitekirk, which is about 2 miles from my house, and is visible from the farm here, so my plan was to pop out a little before 9pm, to hear, though probably not see in the mist, them pass. The speeds of planes these days are familiar to us all, but they are still mind-boggling. The Arrows would be taking off from Scampton, Lincolnshire at 20:14, would fly up the East Coast, coming in off the sea somewhere near St Abbs, and would be at Whitekirk, in open country in East Lothian, at 20:56, passing over Edinburgh at 21:00, arriving at Rosyth, on the far side of the Forth Bridges, at 21:03, and then turning to land at Edinburgh Airport. 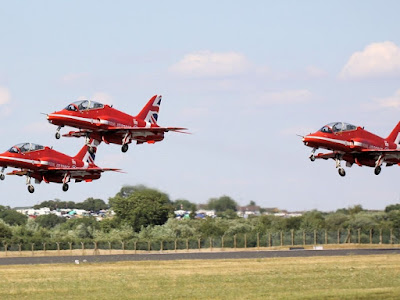 Friends of mine (in particular Stryker, Goya and the Archduke) who have personal experience of travelling around this area by road will appreciate the unbelievable journey times in the flight plan.

So, around 15 minutes to 9, I walked down to a gap in the row of trees which separates us from the next section of the farm. Through this gap runs a concreted road which passes between two large fields, both under wheat this year, and the view is extensive. Straight ahead, which is south, the land drops to a shallow valley which contains the (Scottish) River Tyne, and then rises to the Lammermuir Hills in the distance. To the left, which is east, beyond the wheatfield is the open sea - straight on for Norway if you keep going. To the right, which is inland, looking west, you can see as far as Traprain Law, and you can also see the church and the roofs of Whitekirk, about 2 miles away. I was in plenty of time. It was a still evening, I could just hear the occasional train in the distance on the London line, the traffic on the A1 and the waves coming in on the beach at Scoughall, so I was confident the Red Arrows would be very distinct. 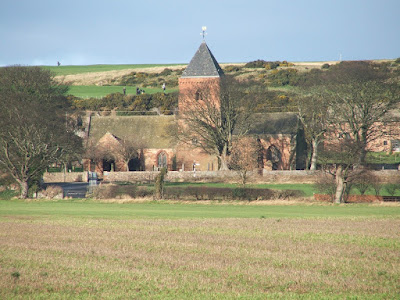 I stood there for a while, enjoying the peace and quiet, wondering how long the planes would be audible before they got up here. By about 21:10 nothing had happened, and it was obvious I had missed them. Not to worry; I enjoyed my walk back to my house, and on the way I saw a few deer in the wheat field (they were watching me carefully - they may even have been giggling a little), and I also saw a large dog fox crossing the path in front of me. It was getting pretty dark by then.

My wife has recently heard foxes at night; this is the first one we've seen for ages. A few years ago, before the farm's ghillie retired, there were no foxes here - he used to shoot them. Similarly there were no rats in the woods, no magpies, we never saw squirrels. Times have changed - you can't get the staff, you know.

When I got home I learned that the foggy weather had caused the cancellation of the Red Arrows' flight. I don't know when they cancelled it, but it got less publicity than the original programme of events!

My wife's friend in Edinburgh had gone to the trouble of walking to the top of Corstorphine Hill to watch - a real grandstand view up there - so she must have been rather more disappointed than I.

Anyway, it didn't take up much time, and I had a laugh about it. I wonder what excitement I'll get up to today? Yesterday I didn't see the Red Arrows; today I could fail to see - well, anything, really. Spanish Armada? Visitors from space? Any requests?