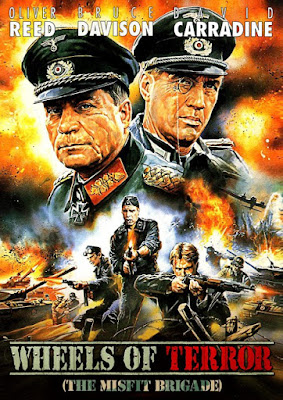 Within the last year or two I've started picking up cheap DVDs of old war movies - I've thoroughly enjoyed Sink the Bismarck, Bridge over the River Kwai, The Desert Fox and a pile of others - some I'd seen before, back in the day, some are new to me - just the thing on odd rainy afternoons, or on the 3am insomnia shift when the depression bites. I can accept them and enjoy them for what they are, with all their dated values and outmoded politics.

I still have a few that I keep an eye open for - Battle of the Bulge (the one with Robert Shaw) is on my list, but I also get occasional recommendations from friends, or people whose taste I know to be about on a par (good or bad) with my own. Someone very kindly sent me an Amazon voucher for Christmas, so I took the opportunity to buy a few things I would not otherwise have treated myself to. I bought the new, 4-disc set of Abel Gance's Napoleon (1927?) - digitally restored, includes a pile of additional material which had become detached from the original movie, and a new musical soundtrack (derivative, but very good) by Carl Davis. At 8½ hours (or whatever it is) it still requires a major commitment in coffee and devotion, but I have started on the first disc, and have given up and determined that I shall start it again very soon when I am more relaxed.

To make up the package (and benefit from shipping savings) I got a few other things - notably Cross of Iron (which was recommended by a mate and which stars James Coburn as the famous blogger, Sgt Steiner - the film is OK - I'll watch that again, too, but mostly for Coburn) and Wheels of Terror, aka The Misfit Brigade, which was also recommended, and which might just be the worst film I've ever seen. 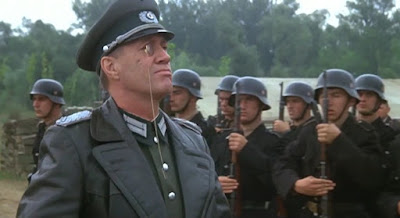 Wheels of Terror was made in 1987, I think (certainly the haircuts would confirm it was around that time), and it is based on one of the many works of Sven Hassel, a Dane who served in the German army in WW2. Now there may be a great many Hassel fans out there - all due respect to you all, I was never one. I recall WH Smith and station bookshops everywhere stocking best-selling pulp paperbooks by Hassel, all very popular, all with lurid covers, and all, reportedly, crammed with extreme violence and sweary words. I never bought or read any - not a matter of snobbery or prejudice - I seem to have been very busy in those days, and books of sweary words were not a high priority.

Anyway, I read the description of the DVD version of Wheels of Terror, shrugged, and decided it was probably worth £2.45 or whatever it was, if only to fill the gap in my education and see what all the fuss had been about.

Wow. The whole thing is buried under a lot of anachronistic American slang and mannerisms, the German soldiers behave like a comedy version of the US Marines (lots of "Yes - SUH!" in unison). The story line is silly, and pretty much irrelevant anyway, the bangs are bigger and brighter than you would credit, and the dialogue is something else. I kept finding myself shaking my head, and reminding myself, not only that someone had actually written this crap, but also had thought fit to include it in the movie. The acting is unbelievable in more than one sense, but in the end it is not so much bad as unnecessary - presentable actors such as David Carradine and Oliver Reed (not sure if Reed actually speaks, come to think of it) offer up their lines in very obvious disbelief - perhaps hoping it will all be over soon. 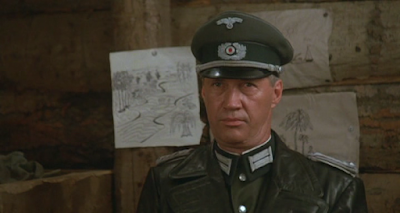 Maybe the style has dated - maybe they were trying to cash in on Hassel's success, or on the takings of some other film they wished this could have been. I was, you will have gathered, disappointed. I'm relieved that I did not read any of the books when they were around, but it's always a shame when you revisit some faintly naughty indulgence and find it was not worth the bus fare.

Why am I writing this up? Not sure, really - maybe it fits into a recurrent theme of nostalgia not being what it used to be - maybe it is just a public-service warning for non-Hassel-fans to avoid this film at all costs. It is without a single redeeming feature (though the unit markings on the tanks may be accurate - I wouldn't know) - you would be far better spending an hour and a half sweeping up leaves, or washing the car.
Posted by MSFoy at 13:25