I guess we all have a fairly limited set of major world events in our lifetime - that's almost certainly a good thing. I can remember where I was when I heard of the assassination of JFK (involved in the preparations for a youth club dance, in a church hall in Liverpool - St Barnabas' church - my girl friend suddenly started weeping), I know where I was when the Berlin Wall came down (I was in my house, in Edinburgh, watching it on TV, waiting for the shooting to start), and today I've been thinking of my whereabouts on 9/11. It doesn't really matter of course, but somehow world events seem much longer ago when you think in terms of your own timeline.

My wife and I were on holiday in Tuscany - in fact it was the last holiday we ever had on our own (our son was born a year later). On the actual day we had taken a local bus for a day trip to Siena. It was a very thundery, humid day, and Siena was absolutely packed with tourists, which I guess is not unexpected. The day was significant in that my wife received a call on her mobile phone from a headhunting agency, with an excellent job offer that she had almost given up on; she received the call just as we were going to enter the Duomo - that's the rather odd building in Siena that seems to be made out of liquorice allsorts. Overall our day out was a bit hot and a bit fatiguing, but we took the bus back to San Gimignano in a celebratory frame of mind, with plans for a suitable budget-busting meal in the evening. I have some photos from the day.

When we got back to our hotel we turned on the TV, and saw the CNN pictures from New York. That put an end to any kind of fun evening we might have considered. Eventually we agreed to switch off the TV and catch up in the morning - really couldn't handle the flow of news that was coming in. 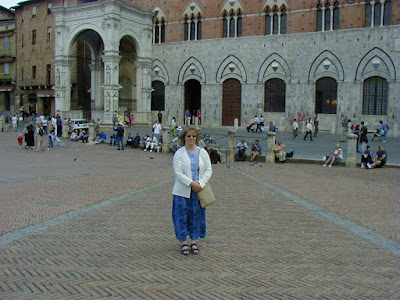 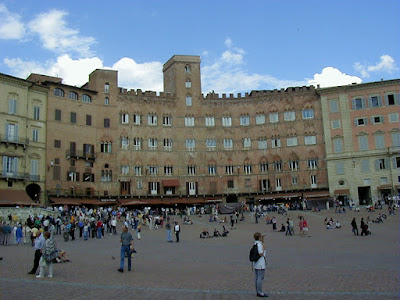 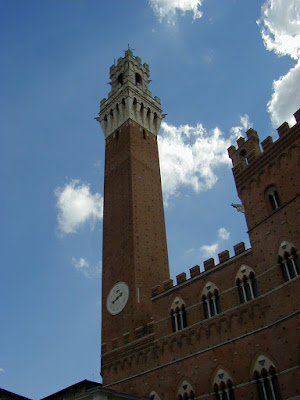 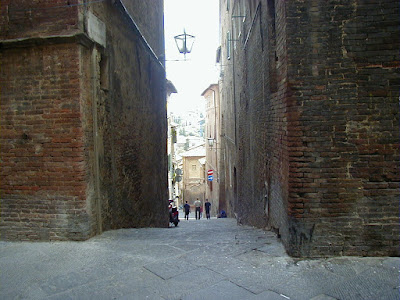 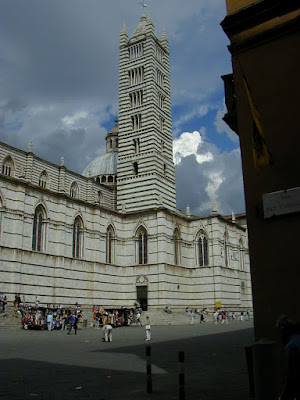 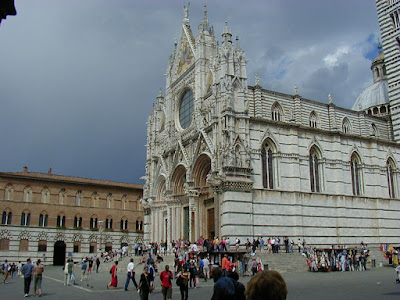 Over the next few days we carried on with our holiday - a bit subdued, of course - and tried not to worry about whether there were going to be any flights home the next week. We visited Perugia, and there and in Assisi we spoke with a number of Americans who were very upset, understandably, and had absolutely no idea how or when they might be able to go home again. The heart seemed to have been kicked out of everything - and I still think of 9/11 as the day the world changed forever. At that time, I was working on some actuarial projects connected with Risk Management, and it was immediately obvious that many of the fundamental assumptions on which our thinking was based had suddenly gone out of the window. The comforting feeling that there was no-one crazy enough to destroy a civilian aeroplane while he was sitting on it was gone, and a whole pile of other bed-rock stuff had vanished. Start again. As I say - nothing would ever be the same again, in many ways.

Anyway, I don't wish to get into a lament about the awfulness of the event - that has been well considered and documented - though it is inevitable that this is the context in which our thoughts should be framed; I spent some time today thinking about my life and my surroundings on that historic day. I know for a fact that I was in Siena, and it rained, and my wife landed a new job. Personal stuff - it's far easier to think about personal stuff.