I chanced upon an advert for some custom component racks for Command & Colors, and I realised that I'd always wanted some, so I ordered up the "Napoleonic Starter Set", which I shall describe in a moment. 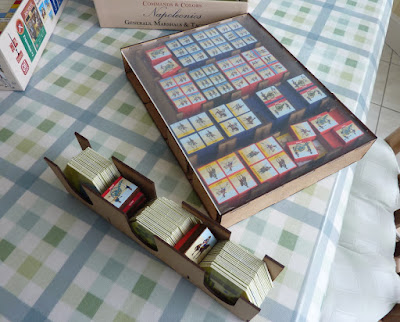 The "Sleeve", with four counter racks in it, and the scenery-tile holder in the foreground

It came quickly, from "Sally 4th", of Melmersby, North Yorkshire. I realised that it required rather more assembly than I had planned for; that's OK, of course, but I put it away until the weekend.

The Starter Set comprises laser-cut MDF components to make up four counter racks (2 for small counters, 2 for medium), a "sleeve" thingy which the racks slide into, and also a rack to hold scenery tiles.

Background: Though C&CN is my go-to Napoleonic game with miniatures, I've never played the actual boardgame very much - setting out and tidying away the block counters is a pain in the tonsils, to be honest, and, since I store the boxes upright, on their ends, I have had to improvise all sorts of little containers to keep the counters in, to avoid the sort of chaos on opening the lid which would be guaranteed to make me put the lid back on and put the game away unplayed. It's not been a great success - the game doesn't get used, so perhaps the introduction of some better organisation would make all the difference.

I did the component assembly while listening to the Manchester Utd game on the radio on Saturday. Straightforward enough - the tabs are accurate and everything lines up, and I used my standard "Tacky PVA" to stick everything together. All quite straightforward, though one of the parts is a Perspex lid for the "sleeve" unit, which is not glued, but is anchored by tabs which fit into the sides. First problem was that the tabs on the Perspex bit did not fit the holes - quite a lot of fiddling with needle files to improve the fit - eventually I got it together by forcing it in - crude but OK. A couple of days to let everything dry out, and this morning I set about transferring my counters to the new racks.

That was rather less satisfying than I had hoped. The storage cells on the racks hold 4 layers of 3 x 2 (for the small counters) and 4 layers of 2 x 2 (for the medium sized ones), and there really isn't any space. This is glued MDF, not exactly engineering standard, and the counters are really very tight. It's fiddly to get them in and out, and they really don't fit brilliantly. Why on earth they couldn't have allowed an extra mm each way I have no idea. Never mind, I got them stored away, and they definitely don't rattle, though the Perspex lid holds everything firmly anyway, so rattling is not a problem. If I had made these, I'd have made them just a tad bigger - there is some risk of damaging the counters getting them in and out.

I also realised that the Large counters need a Large rack unit, but I had enough space to fudge them into the racks I have. Everything goes back into the box nicely enough - I was concerned about the raw MDF wearing the surface of the playing board, so put in some kitchen roll to pack it a bit. The game boxes have gone back onto their shelves with no rattle at all.

(1) is it well made? - yes - it's OK - the MDF is what you would expect; the Perspex lid is not well finished, which turned out to be less of a problem than I thought it might (brawn over brains every time). The design is clever, but making it all so tight is unnecessary and something of a nuisance.

(2) is it good value for money? - it's expensive - I think I paid £28 including P&P for the Starter Set. I was surprised, given the price, that it required so much assembly. It's nice to have racks specially proportioned to hold C&C counters, and to fit in the game boxes. The pay-off is whether it encourages me to use the board game more often.

(3) is it going to encourage me to play the board game more often, then? - probably not, I'm afraid - it's not very quick or simple to get the counters in or out. I'll see how I feel in a week or two...