Having spent a week or two deep in my books, sorting out the details of the Kilsyth battlefield, and a day of falling into ditches, plugging around the actual countryside, I've now assembled a tabletop version for the forthcoming game. From the sublime to the agricultural.

As mentioned previously, I've decided to turn the battlefield through 90 degrees, and start the action as the actual fighting started. It looks OK - the distances are about right - the next viewing will be in a couple of weeks, when there will be more soldiers and rather fewer dining chairs on show. 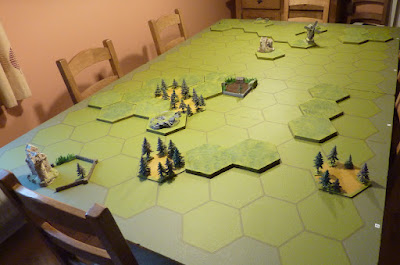 It's a very plain-looking field - rather a bleak piece of Scottish moorland. I had thoughts of adding streams to break up the ground a bit, but decided against it. The streams are all small, and they just disappear into the general idea that the ground is rough! The picture above shows the valley from the South - Montrose will be on the left side as we look at it, Baillie on the right. The hills and woods are unambiguous, the hills with rocks on top are impassable, the walled-off areas at Colzium Castle (left foreground) and Auchinvalley Farm (brown field, in centre of the table) are proper enclosures which may be defended; the other buildings are just scenery, with no cover or other function, to identify positions on the battlefield. 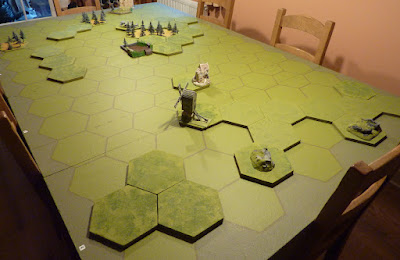 And now we are looking back the other way - Montrose will be on the right, in this view. Colzium Castle (far end) was the home of the Livingston family - strong Royalists, and Montrose's troops camped on their land the night before the battle. The castle was demolished in the 18th Century, and much of the estate is now under the modern reservoir.

My reference to a "dry run" is a sort of lame reference to constructing a battlefield with the reservoir removed. You can see how an idiot with too much caffeine might think this was amusing at 11pm.

Specially for WM and Stryker, here's a close up of Colzium Castle (aka Claypotts Castle, courtesy of Lilliput Lane) 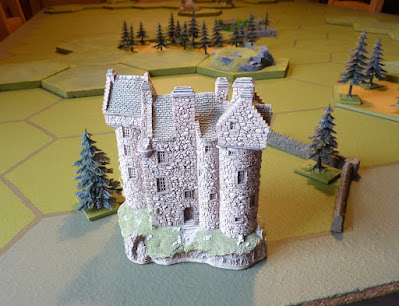