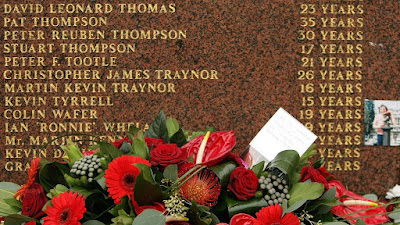 With luck, this will be the last time I mention Hillsborough here. Within a couple of days of the mistrial decision in Salford last week (have a look at my earlier post if you wish), at the end of which the defence lawyers restated their argument that the prosecution was a witch-hunt, and that this finally laid to rest any suggestion of a cover-up, it is announced today that West Yorkshire Police and West Midlands Police had already agreed a settlement to families and survivors, admitting to the cover-up and the lax internal Police investigation which followed, following a civil action which was raised against them in 2015.

This was agreed during April, apparently, but was not announced until today, after the Salford trial ended (or didn't end, in this case). Copious apologies from the Police, and the damages are because of admitted concealment of the facts and misinformation.

OK - on the face of it, that seems very positive. Whether the money available makes any sense or not is not the immediate point, and also it is apparent that the victims' families have pursued this primarily in search of truth, not for financial gain, to protect the reputation and dignity of their lost loved ones, and to get someone to accept the blame for the tragedy in 1989. I guess this is something of a compromise - no-one will be personally blamed, but here's some money. It's probably as good as it was ever going to get.

I would be very interested to see the BBC wheel the three Salford defence lawyers out again, in view of the fact that the Police had already agreed to settle a month before the mistrial, at the close of which the lawyers were still muttering about a drunken riot, and strongly denying that there had ever been a cover-up. Well, it looks as though there was one, after all, and action is being taken. Embarrassing or what?

Mr Goldberg QC [in particular] - do you have anything to add?

I wish for some peace and a little solace for those members of the families of the 96 who are still alive - many of them didn't get this far.

It may not be accessible outside the UK, but the new BBC story is here. I didn't make this stuff up.