This unit has taken a while to finish - the hot weather has been a problem for painting, and also the football has been a very enjoyable distraction. Anyway - here they are. They still have to have their flag fitted, and I'll see to that in the morning when the varnish is properly cured. 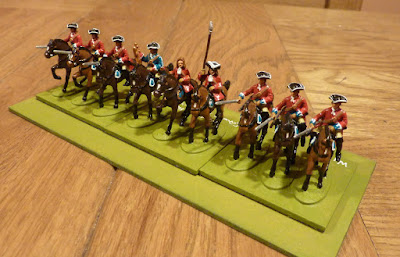 Problems with the heat? Well, mostly these are to do with my own tendency to snooze in hot weather, but I did have some issues with paint going off too quickly, and also some concerns about my varnish. Normally, I apply gloss varnish with a fairly large brush - it floods on well, and the fact that it goes on a little frothy is OK, because the bubbles disappear before the varnish dries. However, this can be tricky if the ambient temperature is high - it's possible for the varnish to start to set with the bubbles still present. I was prepared for this, so I've been careful to use the varnish in a cooler room, and everything is fine.

If the flag goes on nicely in the morning I hope to add another photo, and I may line up the growing British contingent for a group photo.

Righto - good morning - the flag is now in place, and here are the extra pictures: 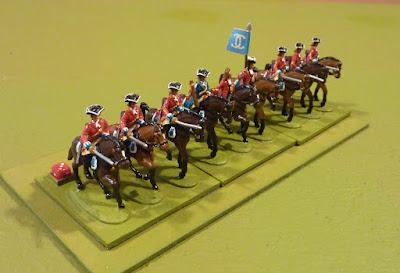 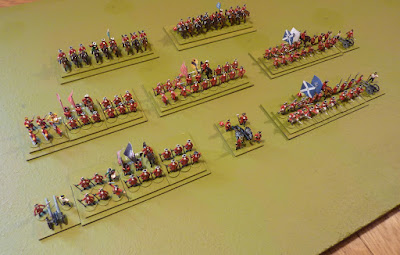 This little British army is still to receive 2 more regiments of horse, 1 of dragoons, 3 (possibly 4) of foot, 2 more field guns and some staff - probably a commander and a couple of brigadiers. After that I have to finish some bits and pieces for the Imperial and Bavarian forces, and then start on the French. There are plans beyond that, but let's keep it sensible for the time being!

I am prepared to bet that you probably know who the Queen Dowager was, but I certainly didn't (being an ignopotamus), so I did a bit of reading, and I now have at least some basic facts:

She was the widow of Charles II - Caterina de Bragança. She seems to have had a fairly poor time of it when Charlie Boy was still alive (having to accept Charles's mistress into the Royal Household, among other outrages), and she famously had no children, as a consequence of which there were quite a few British monarchs in a short time. Partly because she was trying to secure her inheritance, she hung around in Britain for some years after she was widowed, and her regiment of horse was still in evidence in 1703 (though known as Wyndham's Horse by this date). She returned to Portugal before she died in 1705. 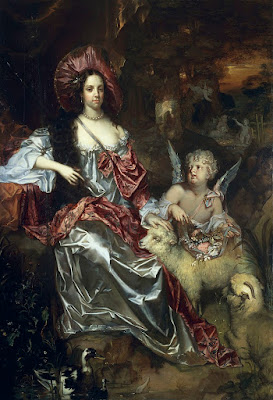 Here is a portrait of Queen Caterina, dressed as a shepherdess. You probably recognised her outfit immediately, since all shepherdesses dress like this - certainly in Scotland they do. The cherub seems dubious.