Brunanburh: The Colour of Fallen Leaves

Well, my first books arrived. They came very quickly, the only slight shadow was that they had obviously been packed by someone at Amazon who was eating potato crisps - all 3 books had big greasy fingerprints on them. I am very pleased to report that a microfibre glasses-cleaning cloth removed the marks, so everything is cool. 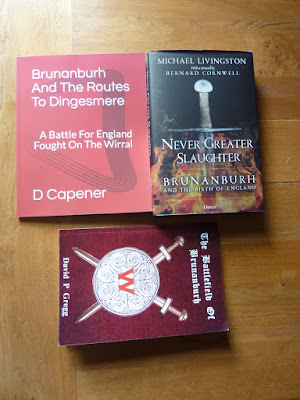 I've only dipped into them, thus far - the two smaller books (not the Michael Livingston volume) contain a lot of very cryptic data concerning GPS readings for archeological finds, and a host of monochrome photos, some of which are too obscure to make out what they are - not to worry. All good, and this is all new to me.

Livingston's book looks excellent - he is a very enthusiastic writer. It's a while since I read a book describing archeological work (the previous one was an account of the digging up of St Baldred's religious settlement here in East Lothian, including the grave of Olaf Guthfrithson), and I had forgotten what this stuff is like. For a start, the evidence they describe is often disputed, and mostly too damaged to be sure of very much. That's all OK - it's the nature of the beast - the raw material sometimes seems, to a layman, too unconvincing (or even unlikely) to make much of a story.

I'm also reminded that this kind of work involves a surprising level of jousting between proponents of rival views - the put-downs of other people's efforts are sometimes verging on sarcasm. Maybe this is how scholars behave?

I shall rise above this. Yesterday I was reading about the arguments in favour of the Brunanburh battlefield being in the Wirral. One big positive is that the Wirral is an obvious landing point for the ships which brought the Viking force from Dublin. Mention is made, in the Brunanburh poem in the Anglo-Saxon Chronicles, of Dingesmere, which might be where the boats were, or might be somewhere on the route back to where the boats were, or it might even simply mean "the stormy sea" - there's a lot of disagreement about translations. Whether or not Dingesmere was an actual place, it is worthwhile trying to think through where the Vikings would have landed. A couple of points here:

* This was not a land of mystery to the Vikings - there were Viking communities in the Wirral, and it's a short crossing from Dublin, so they probably knew where they were going.

* We don't even know whether they landed at the end of the Wirral peninsula (on the Irish Sea), at somewhere like Meols or Leasowe, or in the River Dee, or in the Mersey, or, as one of the theories has it, in the Pool of Wallasey, which is a branch of the Mersey.

* Somewhere in the ancient writings, the water is described as yellow, which has been interpreted as meaning sandy or muddy. Debate about accuracy of translation has suggested that the original meaning is closer to "the colour of fallen leaves". Hmmm - how long after they've fallen? This could be yellow, or greenish-brown, or anything, really, but it is of interest since the Rivers Dee and Mersey are very different, as I shall now discuss briefly. All primary-school geographers please pay attention. 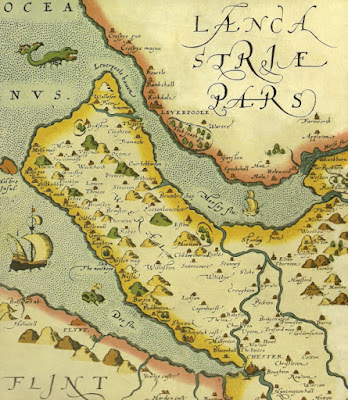 Here's an old map of the Wirral. A modern map would be rather different, since the River Dee has silted up. You will see that the profile of the Dee Estuary is triangular - the river which passes under a road bridge at Chester (which was a port in Roman times), gets wider and wider as it approaches the sea. This means that, when the tide goes out, the water runs slower and slower as the width increases - a constant volume of water moving through a widening channel - and the silt and mud falls to the bottom. In the 4th Century, there were already problems with silting near Chester, and it became necessary to find useable ports further downstream. This continues to this day - Neston and Parkgate were seaside villages at the start of the 19th Century, and Parkgate was a busy landing place, but now the old sea wall faces onto an area of overgrown saltmarsh which is over two miles in width. When the Spring tides bring the Dee into contact with the Parkgate sea wall, the event is rare enough for visitors to come to see it. Parkgate may well have been a viable landing place in Viking times - there are other possible berthings at Caldy and Heswall and Thurstaston (Thor's Stone). The main point here is that the Dee is, and always has been, muddy. 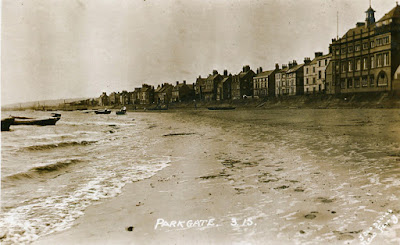 Parkgate, circa 1900, when they still had a beach and fishing "nobbies". When I was a kid, you could still get a little bag of boiled local shrimps in the village 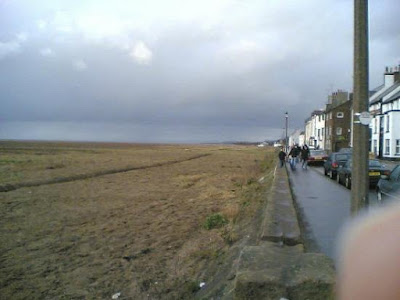 This was before the tide went out, permanently, about 2 miles. Don't try to land your army there now.

As you can see from the map, the Mersey has the reverse profile - this river is also muddy, but opposite the Port of Liverpool it is about a mile wide, while a few miles upstream, opposite Speke and Oglet, it is nearly three miles wide. When the tide goes out, that great pool of water rushes out through the narrow mouth, and it keeps itself clear. This is why the Port of Liverpool is more important commercially than Parkgate, but it also explains why the Mersey is a different colour from the Dee.

But is it the colour of fallen leaves? Who knows? I shall read on, with interest.

It seems that the likely battlefield site (if it was, in fact, in the Wirral) is around the village of Brimstage, which is right in the centre of the peninsula. If Miss Bentham's class were to cut out a cardboard Wirral, a pin through Brimstage would be close to the centre of mass. They could colour it in with crayons. Yellow water - all that.