I adopted the heading "Wargaming Infrastructure" here because it is more imposing than "improvised daft bits and pieces", which was another possibility.

In a dark cupboard, I am still working on my Prinz Eugen rules. The Close Combat rule is now a derivative of Stryker's Muskets & Marshals melee system, and is shaping up nicely. This uses comparison of individual dice rolls, and I realised that for the way I propose to use these I need to revisit an old concept I used years ago - that of fractional dice.

Once I had a couple of varieties of these, nothing very scientific, but very useful in some situations. They were generically known (by me) as "skimpies", and there was a Half Dice (numbered 0-1-1-2-2-3) and a Quarter Dice (0-0-1-1-1-2). Anyway, they are long gone, but I realised that the current draft system for Prinz Eugen would benefit from the presence of some of my old Quarter Dice, so I have quickly (and cheaply) knocked some up, and they seem to be doing the job OK thus far. The "cheaply" bit is partly because I may change my mind about what is needed, but is mostly because of my lifelong devotion to being a skinflint. 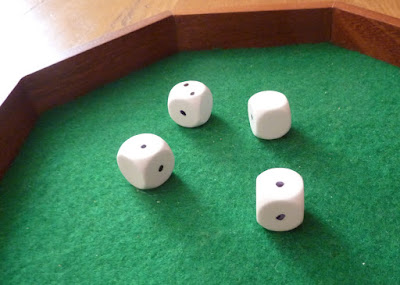 Once upon a time, my friend Chris worked in a place that tuned racing motorcycles, and he had all sorts of fancy kit for hand-fabricating parts for carburettors and all that. He could produce custom dice for me at the drop of a hat, during his lunch hour - I would supply blank dice (which in those days you could only get from educational suppliers) and he would drill them with great precision, and fill the holes with coloured resin, as required. Quality.

This time round, I opened one of my spare packs of 16mm blank dice (how did you guess I would have quite a few of these?) and marked them up with a Sharpie pen, which lacks the elegance and the accuracy of Chris's lunchtime specials from the 1970s, but otherwise ticks all the boxes for St Ebenezer.

So here you have them - Quarter Dice - "skimpies" to the initiated. They may be featured in the coming rewrite of Prinz Eugen.

Footnote: Friend Chris later became a big-deal DJ on a local commercial radio station, and left the petrol-head workshops, and I lost touch with him. Eventually, as does happen, he was required to step down to make room for someone younger, and he vanished so completely that I have failed to trace him subsequently, though I have tried chasing up former mutual friends. No-one knows what happened to him. You don't suppose commercial radio stations do something sinister with their ex DJs, do you?