Hooptedoodle #400 - Roller Towels as We Knew Them

Recently I was looking at some old photos of domestic kitchens - circa WW1, I guess, and I saw a picture of one of these... 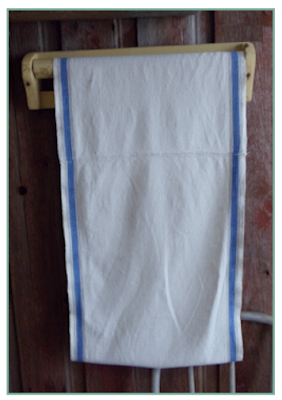 In case you don't recognise it, this is a traditional roller towel - linen on a wooden roller - such as my grannie had on her kitchen wall, and they were found in various other places (all my friends' grannies' kitchens, for a start) - they were everywhere, once, but I had forgotten about them completely.

Two yards of linen, stitched to make a loop. My grannie's would certainly have been clean (boiled) every day. We had them in the washrooms at my primary school - I was at primary school in the 1950s, though the school itself was pretty much Victorian. That was less satisfactory, the soiled towel would go round and round, getting wetter and filthier as the day went on. I guess they must have been in factories and pubs and everywhere.

By the time I was working, and in the habit of going into pubs, they had been replaced by linen rolls in metal dispensers which were usually serviced by a contract company - and they seldom seemed to work very satisfactorily - they would jam, or the towel would end up in a sodden heap on the floor. Eventually, of course, all this was replaced by paper towels, to ensure someone could make money from the conversion of forests into non-recyclable paper waste, and later still by hot air blasters. I guess this has all been progress - driven by the search for improved hygiene.

Anyway - back to the point. I can see some arguments in favour of the old linen roller:

* If it was used sensibly, each user drying their face/hands and moving it down a little, it might have dried off by the time it went right round

* It kept it off the floor

My grannie's used to be on the wall next to the big sink in her back kitchen (scullery?) - when he came in from work, my grandad used to wash his face and hands with Stergene (bottled laundry detergent), I believe, which is scary, and on one famous occasion he accidentally washed his face with liquid ammonia, from which he seems to have recovered all right, and recovered long before his wife forgave him for his language.

Here's an old vote in support of roller towels, with useful life-style tips for the enthusiast:

It seems strange to speak of the roller towel as a convenience, when it should be considered a positive necessity in every well-ordered household, yet there are many more kitchens without them than with them in some parts of the country— the cook substituting her work apron, or, worse, a dish towel, to wipe her hands upon. A roller and fixtures can be bought ready to screw into the wall. Six towels is a bountiful supply for one roller. Buy a good quality of linen crash, making each towel two-and-a-half yards in length; sew in a seam and fell neatly. Roller towels that have been in use a few months make the best tea towels, as they are soft and pliable, a quality by no means to be despised. Cut in two, hem the edges and again supply the towel drawer with new roller towels. In this way the drawer can be always supplied with strong towels for kitchen toilet purposes, as well as soft ones for the dishes. — The Weekly Wisconsin (May 13, 1889).

Conversely, it was also identified as a menace to health, as here: 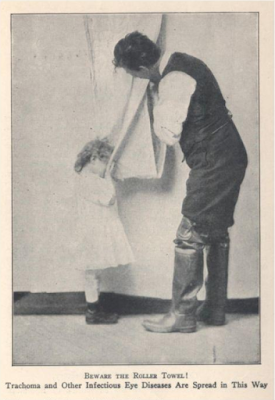 From a public information advertisement in the US in 1915

While shaving this morning, I wondered if a variant could have been produced - a Moebius Towel? - with a single twist in the towel before stitching - this could gradually have presented us with both sides of the linen before we got back to the soiled bit. Nah - it wouldn't work, but I do find shaving very boring. 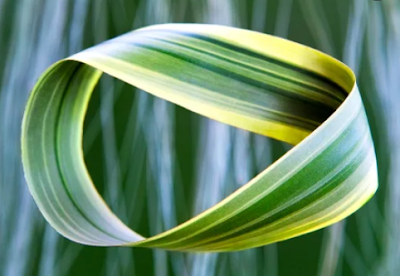