A bit more Merseyside local history, I'm afraid - pretty ancient history, too. During lock-down, I am presently working my way through some of the old BBC TV Coast series on DVD, and enjoying them thoroughly - apart from anything else, it's nice to get a change of scenery, and to see people travelling about in the fresh air and speaking to each other! 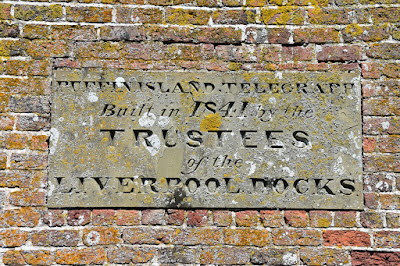 Yesterday I watched the episode from Series 2 in which they discuss the North Wales coastline from Anglesey to Liverpool. One of the items covered was the Optical Telegraph, begun in 1826, I think, which was built to communicate between Holyhead, in Anglesey, and Liverpool. My interest was kindled!

Long before any electric telegraph, it was very useful to be able to pass messages back and forth, with news of arriving shipping. In those pre-steam days, most of the sugar trade from the Caribbean and the cotton from the USA came into Liverpool, and voyage times were very variable. When incoming ships reached Anglesey, they only had about 70 miles to go, across Liverpool Bay to the port itself. Ships passing Holyhead could exchange (flag) signals with the signal station, and then the telegraph system (invented, I believe, by an employee of the Liverpool Dock Company named Watson) would send news to Liverpool, where the shipping companies could make arrangements for berthing and unloading, and the local traders could make announcements in the Cotton Exchange and in the local commodity markets, and of course, messages to the ship could be sent back.

The system used a relay of semaphore stations, sending coded messages which consisted of numeric signals, translated by means of a code book.

Each station would receive incoming signals from an adjacent station in the line, and resend as quickly as possible. I imagine the job of spotting a new signal quickly would be a demanding one, but the signal traffic was heavy, so there might be little chance to doze off! This sounds painfully slow, since someone would have to decode the numbers at each end, but it seems that 3 to 4 minutes from end to end was about average, which is impressive. During the BBC TV show, they made great play of the fact that there was a claim that the fastest ever recorded time for a message from Holyhead to Liverpool was 27 seconds. My reaction was to wonder how they could possibly have measured this, since there was no time signal or satellite clock to check it against. It took me a while to realise that it would be possible to time a there-and-back signal and response at one end of the line, but I have to say that still don't believe they could have done it so quickly!

If you want to know more, here's a link to a pleasing little history of the telegraph system - there seems to have been a gradual improvement in the technology - there are still traces of it around. I remember that when I was a small child I saw the signal pylon at Hilbre Island, just off West Kirby. Come to think of it, I never realised until yesterday what that site was!

One nice moment in the BBC programme was a reference to the fact that that one of the coded signals in the book, transmitted as a number, meant "do you have the code book?", which, of course, would convey nothing at all if you didn't.
Posted by MSFoy at 12:01