WSS - Another Batch of Cavalry

It took me three days (not very intensive days) to paint the remaining cavalry which were still in the current queue. About half that time was needed to refurbish those figures I could lift pretty much straight from Eric's collection (with facing changes and a bit of cleaning up), and about half to paint the missing command figures from scratch. 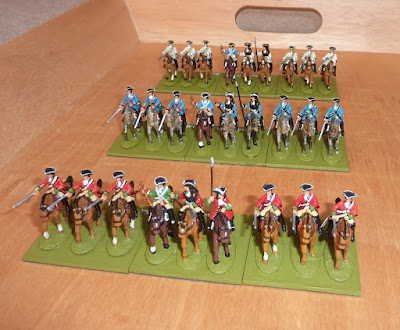 From front to rear, these are the (Bavarian) Santini Dragoons, the (Bavarian) Leib Garde and the (Imperialist) Aufsess Dragoons. Not a flag in sight, as yet. I have a good image of the flag for the Aufsess boys, courtesy of one of the Bruno Mugnai books, but have come up with nothing at all yet for the Bavarian dragoons - maybe they didn't carry them in the field? Nah - there's men with poles waiting for them, so if I can't get authentic flag images I'll invent my own. I've a lot of flags to do, so I'll have a graphic-design week later on.

The Aufsess unit (grey coats) are actually Franconian, from the Fränkische Kreis - I chose them because I had pre-painted troops in very similar coat colours - no better reason for selection could be imagined! The dismounted dragoon contingent for the Aufsess are now in the queue - I have the figures, I just have to paint them.

No excuses left now - the next job must be the first of the remaining big Austrian foot batches - 4 battalions, I think. I'll clear the decks and have a couple of days break before I disappear into that lot.

I had a very pleasant walk on my own yesterday on the farm - during one of the few sunny spells of the day. I walked down to one of the farm's reservoirs - really just a big rainwater sink which they use to pipe water on to the fields. There must be fish in the reservoir - I saw a swan, about half a dozen geese and a few ducks, and a spooky heron took off as soon as I appeared. Strange creatures, herons - they take off like a lorry-load of scaffolding. I also saw and heard the skylarks busy over the farm fields, so I guess they were trying to distract my attention from their nests.