After a few months off, to leave space for some heavy Real Life stuff and also to avoid some oppressive heat up there, I've got back to some soldier painting in the Attic Room. 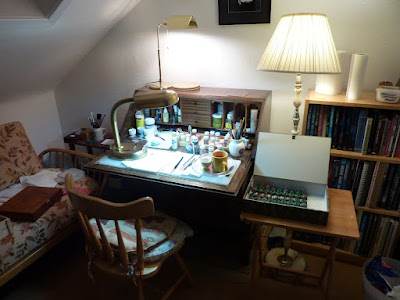 Up in the roof - very quiet up here, except when it's stormy. Tea and biscuits and I'm up for it.

I'm working pretty slowly, restricting myself to sessions of about two and a half hours, but it's pleasing to be back at it. I'm sort of getting myself comfortable with what I hope will be a useful Winter of hobby work. I'm attempting to establish some kind of default routine, so that it feels as though I know what I'm doing! 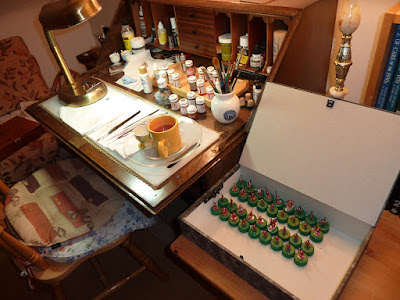 Lots of bright lights, and during daylight hours I keep the blind shut for painting, since my poor old eyes don't like overhead light.

Some suitable radio programme on in the background (if there's no football on it's usually BBC Radio 3 these days, not least because they have minimal news coverage, and I may now have retired from listening to the news...), a flask of black tea and some Abernethy or Digestive biscuits and I'm very peaceful up there!

I have some excellent painting work going on elsewhere, contracted out to guys who paint much better than I do, which will appear here before long, but I've resumed some of my ongoing WSS refurb work. As ever, this refurb stuff is an industry with traditions all of its own. The original figures are never as good as I thought they were, I spend a lot of time fiddling around improving things that I had planned to leave alone, I keep being reminded that these are never going to look as good or as crisp as work on fresh castings would, but they will be fine when they are finished! 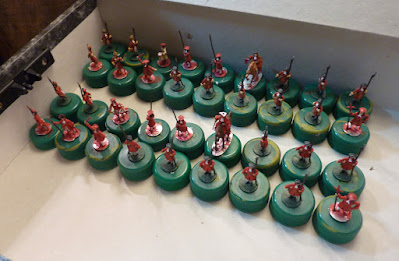 Not yet ready to be looked at - I'm currently half-way through the belting and leatherwork; these chaps will take a big step forward when they get their hats painted!

I'm currently working on a batch of pre-owned figures I bought from the Rye Soldier Shop before it was closed by Covid; the figures on the bottletops at present will, by the weekend, be The Buffs (Holland Regiment, Charles Churchill's Foot, whatever) and the [Royal] Irish Regt (Fred Hamilton's Foot). After that I have some more refurb work to do on some rather better figures, these acquired from the legendary Albannach last year - I am still pondering who they'll be after a wash and brush-up.

British army is shaping up - still some more Horse required, and I'm short of a couple of guns and most of the Staff, but definitely getting there. Next after that will be a belated assault on the French - there are hordes of them waiting to be painted! After that there should be some Dutch, the odd German principality and what not. However, at the moment, my immediate objective is to get settled into my Winter studio, and get used once again to painting regularly and in sensible amounts. Looking forward to it, actually.