It is certainly not my place to offer any kind of official tribute to Clive Smithers - I have neither the authority nor the knowledge - but I have not seen any media mention within our hobby since he passed away on 15th July, apart from private emails, and I felt I ought to write something. 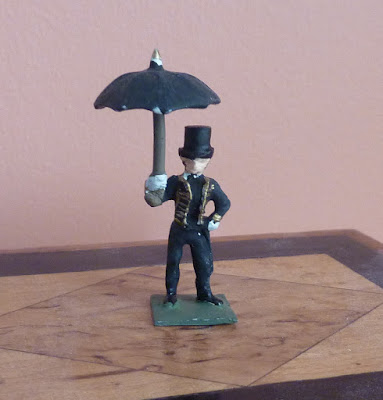 He and I were good friends for some years. I made his acquaintance, as did a number of others who shared his hobby interests, through correspondence associated with eBay purchases, and I met up with him at wargame shows at Stockton and Falkirk. Since he lived only a couple of hours drive away, I was privileged to visit him a few times at Langley Moor, which was always a remarkable experience, including explorations of the soldier and magazine collections in his attic [which, famously, had to have the floor strengthened with steel girders to support the weight of stored metal, and out of which, less famously, I almost fell on one occasion!] and a good Old School lunch in the Miners' Institute.

He stayed here with us on, I think, five occasions, for wargaming weekends. He was always a very courteous and enthusiastic guest, and he was very kind to my youngest son, which I shall not forget. He first came here in 2008, and his last visit was in December 2012, a date I remember very well, since he arrived the day after our village fire station burned down. The fire station is immediately next door to the railway terminus, so I had an interesting journey to pick him up from the train!

As the years passed, he had increasing problems with his health, and eventually travel became more difficult. He suffered with diabetes, and had a series of alarming issues connected with this. On one occasion he came here wearing a surgical boot, a treatment for a bone condition known as Charcot's Foot, from which he recovered after months of wearing this torture device. He bore the encumbrance with praiseworthy good humour, and, typically, expressed his determination to paint up a unit of ECW infantry named after his condition. I don't know if he ever did, but it was a nice idea.

Like a lot of wargamers and collectors, I have quite a few ex-Clive figures around, and I guess there were some veterans of mine in his attic. He was a phenomenon. His knowledge of the history of the hobby and the manufacture of toy soldiers was encyclopedic. If I ever had a mystery figure of whose provenance I was uncertain, Clive would know what it was. His greatest lasting contributions to the hobby were his wonderful blogs, notably the Hinton Hunter, the Lone S-Ranger and Vintage Wargaming, which I certainly hope can survive in some way as the standard references they have become.

I know a little of his background. A native of Durham, he studied History at Oxford, and did postgraduate courses in business and Theology. When I first knew him he had his own business, a consultancy which specialised in project management and website design, most of his clients being local government and charities. He called his firm Esra Solutions, one of Clive's many private jokes. At some early point in his working life, he fell out with some business associate or other, who accused him of "not knowing his arse from his elbow". When he set up his new enterprise, Clive named it Esra ("arse" backwards) as a gentle act of revenge. I have in my possession one of his corporate handouts, a pair of cufflinks engraved "esra" and "woble". The joke lives on. 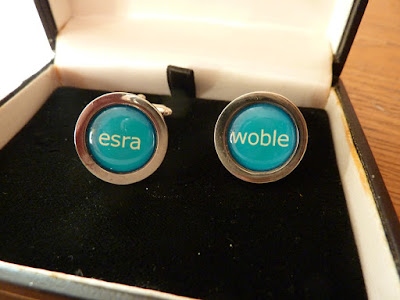 When he last came here, in 2012, he had just started work as director and secretary of Lord Crewe's Charity - his job seemed to be to organise just about everything, from meetings to the website, including interesting extra duties such as managing the town of Seahouses, which is owned by LCC. It was very apparent from the number of phone calls he received while he was here that this was not a job that you walked away from at the weekend, and I believe that his workload, together with his deteriorating health, greatly reduced his spare time subsequently.

I met him again at Stryker's birthday wargame bash in 2016, in Bath, and he was in poor shape physically. However, I visited him at Langley Moor the following year, to swap some figures (of course), and he seemed rather better, though he admitted he no longer travelled very much. That was the last time I saw him. Apart from occasional email contact, we lost touch, and I was surprised how much time had passed when I was informed by Mark that he had died on 15th July. I reckon he must have been 58.

He was a remarkably intelligent and very amusing fellow, very good company, and could be extremely generous. He had a devotion to toy soldiers since childhood, and seemed to have a nostalgic view that a pastime for gentlemen had been rather spoilt by over-commercialisation and by the influx of the unwashed hordes (make your own joke out of that), yet he had a waspish contempt for what he saw as posturing within the hobby, and for self-promoting cliques for which he had little time. He was also, let us not forget, a passionate supporter of Newcastle United.

I am glad that I knew him; I am sad that he died so young, and offer my condolences and best wishes to his friends and family.

I received a very nice note from Clive's elder brother, thanking me for my efforts to write something suitable. He mentioned that the funeral was on Wednesday (4th August). It seems Clive had an emergency op for cancer in March, and had been receiving chemotherapy subsequently, though the coroner recorded pulmonary embolism as cause of death. Clive was 59, in fact, and is survived by two brothers and a sister.

His family are aware of the significance of his blogs, and will try to ensure they are left as they are.