...and other tangential thoughts 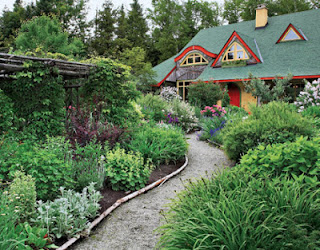 For a while, up until October of last year, I ran a small publishing business which was basically a post-retirement hobby job to keep me sane – or very nearly sane. It was mostly a device to introduce sufficient real hassle into my life to stop me taking out my daily frustrations on friends and relatives.

Anyway, among other things, this operation required me to spend a fair amount of time each month distributing a community newsletter around a rural area. In fine weather this was good exercise and a pleasant activity for which to get paid, though the small number of residents per unit area and the distances involved meant that this distribution work took longer than would have been ideal. One aspect of visiting every one of 1600 or so letter boxes every month was that I met a lot of people, and occasionally found myself in situations which otherwise I would have never come across.

Which, as you may have guessed, is a windy preamble to a short anecdote, which will have some vague connection with something else I’ve been thinking about. It’s a system.

One day, as I was going up someone’s front garden path in one of the villages, a friend walked past in the lane outside. I called to him, from somewhere in the middle of the path, exchanged waves, and said I would phone him later in the day. When I resumed my plod towards the house, I found the householder was standing in the doorway, arms folded.

“What are you doing in my garden?” he asked. Although the large shoulder bag full of booklets made it fairly obvious, you would think, people sometimes would ask me this.

My man was unmoved.

I should, of course, simply have beheaded him with a single backhand stroke of my samurai sword (a move which I practised several times in my mind after I left him). However, experience had taught me that an exchange of ribald witticisms with any of my readers usually – inevitably – led to the discovery that they were closely related to one of my biggest customers, so instead I went into professional mode, and the Smile didn’t dip a millimetre.

“I’m sorry, I didn’t mean to disturb you – I saw someone I need to get in touch with. As for being in your garden, it is the only way I can get to your letterbox.”

Humour, you see. Engage your listeners. Then he produced a rhetorical question which has given me much food for thought since then.

“How would it be,” he said, deadpan, “if everyone came into my garden to hold a conversation?”

Devastating insight. I agreed that would be, at the very least, crowded, gave him his newsletter and left him to enjoy his day.

But that is a hell of a thought. I was allowed to be in his garden – I wasn’t trespassing – I was quite within my rights to be there. I was even allowed, presumably, to speak to a passing friend if I had one and he passed. I would be expected to stop short of attracting the friend’s attention by blowing a trumpet, I imagine, but it all seems in order. The whole subject of what happens if suddenly everyone – potentially everyone in the world? – simultaneously carries out some legal and reasonable action, such as being in the same place, is big and dangerous.

The only thing that saves us is probability. They probably won’t. It is unlikely. Sometimes, in busy cities for example, it seems that they are trying to, but commonsense tells us that my villager’s proposition is silly, but the point is still interesting, if only from a philosophical point of view. What if the entire population of the Earth all arrived on, say, beach on the same afternoon? They would all, individually, be within their rights to do so, but the results would be catastrophic – just think of the effect of that single mass on the planet’s rotational inertia, for a start. Then there’s the environmental impact, lack of toilet facilities, critical failures of the ice cream supply and so on. It really doesn’t bear thinking about – my grumpy villager was right to be concerned.

(1) It is, as I say, very unlikely. The sheer scale of the project management implications are terrifying

(2) The authorities would probably notice once about half the world’s population had arrived, and do something about it

This comfort, however, is tempered a little by some further thoughts

(2) Just a minute – the world’s population includes the authorities – good grief. If they had already arrived, would that make it better or worse?

So I am still a little troubled – the phrase still rings in my mind: what if everyone did... [whatever]?

Given this background and my predisposition to this kind of anxiety, I was lying in bed watching today’s early morning news on TV, and I saw a news clip of Rio Ferdinand, the Manchester United footballer, being struck in the face with a coin thrown from the crowd at the end of the big match against their local rivals, Manchester City. In the early morning, my mind wanders a bit. Some thoughts stumbled around my head – I haven’t refined them or sorted them, but this is what I was thinking about before my coffee:

(1) It’s a pity – it was a terrific match, and it is regrettable that it should end with such a stupid, antisocial act

(2) Ferdinand did the right thing – he laughed it off, made light of it – he could have been very badly hurt, but he wasn’t really

(4) However, there must have been many millions of people involved in football matches yesterday – watching and playing – at all levels, in all countries where the game is played, and the proportion of people who were struck by coins or missiles is so small that it is simply insignificant. If the TV cameras had not been on Ferdinand as the coin hit him we would have heard much, much less about it.

(5) As it is, British ITV (for example) featured a slo-mo clip of the incident long before, and much higher up the batting order than, all other discussion of the weekend’s sport on their news programme. It must be the sort of thing we are interested in, then.

(6) I hear the villager’s voice – “what if everyone threw coins at football matches? – what then, eh?”

(7) Well, that is a worrying idea. Off the top of your head, would you say the media’s outraged coverage would make it more or less likely? If we make the shaky assumption that morons mostly have little imagination, does spelling out (in slo-mo, for the benefit of the hard-of-thinking) how to commit an anonymous, violent offence at a public event lead us to expect a growth in the number of such incidents next week? Place your bets – Faites vos jeux, messieursdames...

(8) I guess we have to react. It is right that there should be some concern, but it should be proportionate, and it should be thought through. The police and the clubs will all be worried, and rightly so. Someone, somewhere will claim that football should be watched from behind a high plastic shield. I hope not, but someone will claim this is further support for a hobbyhorse theory they have held for years.

(9) There was a time in (1970s?) when the authorities and the clubs were so terrified of pitch invasion that there was a requirement to surround the pitches with wire netting to prevent it. The Hillsborough Disaster was graphic demonstration that the risks from the worst imaginable pitch invasion were negligible compared with the risk of injury to the crowd themselves if they were unable to escape on to the playing field in the event of an accident. It is easy to be sanctimonious, or wise after the event, but the police and the sporting authorities, with the best of intentions, got it wrong in that case – in getting rid of a small identified risk they directly gave rise to a new and much more frightening risk which they had overlooked. 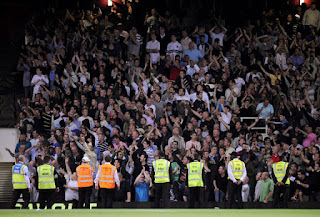 (10) As usual, I probably don’t have anything directly useful to contribute. I have no qualification to offer an opinion, this would not be the place for it, and no-one cares what I think anyway – in any case, I am far better at pouring scorn on the efforts of others than offering anything useful myself, but I do find myself coming to what is effectively a restatement of an age-old truism which makes me groan when other people come out with it:

“The problem lies in society, not in football crowds.”

That’s the standard version. This is usually the prelude to some single-interest wacko thumping his own war-drum on what he, in his infinite wisdom, sees as the answer. So it’s time for us wackos to stand up and be counted. I don’t know how to get from where we are to where we might otherwise be, but I believe that we need to achieve a position where collective decency smothers the idiots.

Football – all sports – need to get back to the position where families go to the games. That will do it. Wives, grannies, kids, girlfriends. As the antisocial element have chased away those with a nervous disposition, so there is an understandable, growing reluctance to take one’s tender nearest and dearest to such a tribal obscenity as a football crowd. The situation is self-perpetuating. In fact, it’s worse than that – it is self-propagating.

For many years, the big games in on a Sunday were remarkably free of crowd trouble, because whole families had season tickets. No-one is going to wish to be a bear or a hard man in front of his mother, for goodness sake. Very inappropriate. You could even see this effect in the old gang-lands of – nothing would get the warriors off the street faster than getting a telling off from someone’s granny. No amount of counterthreat or bluster can combat that. I doubt if the lads out on Kristalnacht took their families along, for example.

So I think the truism is not quite correct, but contains an element of the answer – the truth of the matter, it seems to me, is that the problem is that football crowds do not represent an acceptable subset of “society” (whatever the blazes that is). Society is not especially sick or evil. When you are out doing your Christmas shopping, you will be very unlikely to be struck by a coin, because society doesn’t behave like that. If the shopping centre was filled only with drunk young men singing football songs you would have more reason to worry.

The clubs should think about offering special deals for family tickets. Get the mix of humanity in the grounds back to a healthier state, and let them sort themselves out. I promise not to let my granny throw coins if you do the same.