I was sorting out my bookshelves a bit yesterday – trying to identify a bit of space for some new things, and seeing if I have any old things which I could usefully move on. In the process, as ever, I came across a number of books I didn’t even remember having bought, and some of them look pretty interesting! 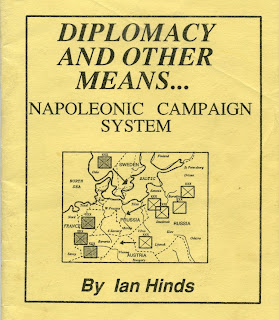 One booklet which I came across again, having read it a few times, is the Diplomacy and Other Means campaign system. This was written by Ian Hinds some years ago for Anschluss Publishing. I got my copy second-hand through eBay. The book is interesting for a number of reasons – mainly for the holistic approach and the way it works. It is unlikely that I would ever actually play the game, since it does not lend itself at all to solo play and since it requires a lot of paperwork – albeit cleverly thought out paperwork.

The booklet makes reference to Anschluss's Ebb & Flow rules for miniatures wargames to cope with the combat aspcts of the campaigns. I had never heard of these, and did a bit of further research, and found they were still available, from (I think –and if this is wrong then humble apologies all round) Essex Miniatures. I phoned up and ordered the core rule system from them, plus an expansion – Module III, which covers the Peninsular Campaign of 1812-14. Sadly, I received only the expansion module – which is a series of army lists and OOBs, with some detail rule amendments for this particular campaign – plus an apology for the non-availability of the core rule booklet, which was now long out of print. 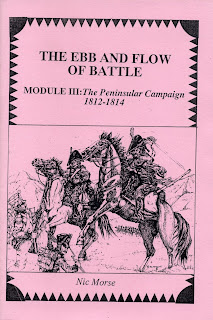 In the long history of wargame disappointments this was only a minor sadness, so I had a look at what I had received and put it away safely on the “small booklets” shelf, to be revisited periodically when I was looking for more space. I’ve kept a casual eye open for Ebb & Flow on eBay and elsewhere, just out of interest – not that I would be likely to adopt the system, but I sort of collect other people’s wargame ideas in the same way as a saxophonist friend of mine collects obscure minor scales – they might come in useful one day, but – more relevantly – I just like to read them.

Never found them, yet I still see reference to them here and there. Someone’s blog was reminiscing about Ebb & Flow the other week, and there is occasional mention on TMP. I’m still gently intrigued, if anyone has any experience of these rules, or tales to tell.
Posted by MSFoy at 21:09

Email ThisBlogThis!Share to TwitterShare to FacebookShare to Pinterest
Labels: Rules