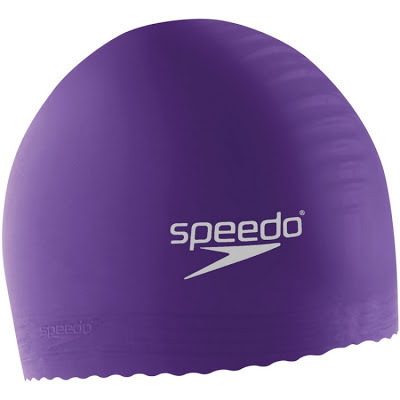 This is a real phoney war period. The Christmas visitors have gone, it’s not time to put away the decorations yet (though I’ve thought about it), and there is not much to do except maybe a quick supermarket trip to top up on groceries before everything shuts again for New Year. Not an easy time to settle to get on with anything on the hobby front – I’ve made a good start with volume 1 of John H Gill’s 1809 Danube trilogy (excellent), I’ve got my third Spanish regular foot battery painted up and based (not interesting enough for a picture), and I’ve got a couple more ECW foot units cleaned up ready for painting, but I haven’t dug out the boards for the wargame table.

In a day or two I’m going to paint a French colonel of dragoons to head up a cavalry brigade, and I have some notes for the start of the next two weeks of my solo campaign. There is an opportunity for a cavalry skirmish coming up, which might be interesting, and my new colonel might find himself fighting as soon as the varnish is dry.

Since we have some brochures lying about, and since the weather yesterday was real Black Dog stuff, I stirred up some preliminary discussion about what we might do for a holiday next Summer – with the faint echo of my post about the Hotel Palumbo still lingering in my head. As ever with these discussions, we have a bigger list of things we do not want to do than of things we do, but we’ve made a start, which is good. One problem I have is that the holiday industry is built around catering for vast numbers of people who work in cities, and who wish to go somewhere warmer and more relaxing to vegetate for a week or two. I don’t really fit in – I’m lucky enough to have a fairly quiet life in a rural, seaside area, so that a fortnight on the coast, for example, would be a bit wasted on me – apart from the food, of course.

Once my son had gone to bed, we got sidetracked into tales of past holidays, and once again I produced my tale of the Purple Speedo, which I enjoyed sufficiently to think about posting here. I probably enjoyed the tale more than my wife, to be honest, but she quite enjoys the consistency checking, to ensure the story has not altered since the many other times I have told it. Time for a pointless yarn... [or should that be yawn?]

This story dates from an age before I divorced my first wife and before the Berlin Wall came down – strangely, I can see certain parallels in these two events. Twice in the late 1980s my first family went on holiday to old – first to Istria, in what is now again , and later to . The trip to was all new and all a bit intimidating, starting right from the flight from to .

We were made very welcome on some kind of Russian Boeing-clone. The flight attendants were tough and capable – not unlike the New Zealand All-Blacks’ front row, and that was the females – but there was a faintly agricultural feel to the aircraft. My 3 sons and I were seated at a plywood table of the sort you might find in an old caravan – we faced each other across it, and I was looking backwards along the full length of the fuselage. I was opposite the main door, which consisted mostly of non-upholstered spars and framework, with a big handle in the middle. Like a giant piece of Meccano. The safety briefing got off to a bad start when the stewardess went to get the dummy seat-belt out of an overhead locker, and the door of the locker fell off with a resounding thump, which seemed a poor testimony to the quality of engineering and maintenance, and had me looking sideways at the Meccano door. 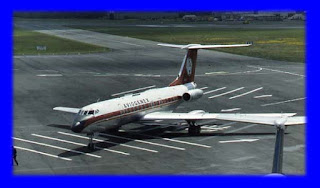 My backward facing seat gave me a remarkable view of the ground rushing away from me through the side windows, not to mention a very conspicuous bend in the fuselage, during take-off, but otherwise our flight was comfortable and routine. When we arrived at , all the window blinds had to be lowered on approach, so that we could not see the military aircraft parked at one end of the airfield. Landing blindfolded seemed a bit dramatic, but apparently this was a temporary measure – the previous weekend on this same flight an ill-advised enthusiast had tried to take photographs of the military aircraft and, as far as we could learn, he was still in prison. Thus we obediently followed the (pistol armed) immigration officials into the airport building – clearly, this was not quite like visiting the Isle of Man. 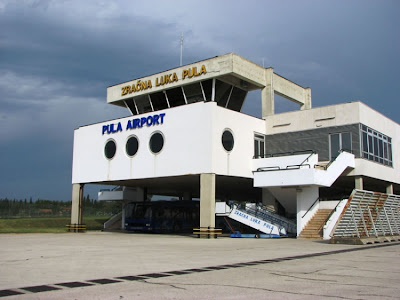 The hotel was pretty good. It was big and modern, but excellent value for money, and the service was terrific – the tourist industry in Istria was a huge earner for at that time. We were at Rovinj, the of from the old . The old town was fascinating – the oldest inhabitants seemed to have Italian as a first language, which had me racking my brains, trying to remember just when they stopped being Italians, but I had a feeling that was probably not a good question to ask. There wasn’t a great deal to do. I spent some time wandering around the harbour and the old town, but apart from state-owned shops selling lace and fairly tatty filigree silver work there was little else to look at, and history seemed to have started in 1946 or so, so there was not much in the way of museums.

So it was swimming and sunbathing. I had my running kit with me, but the air in the forests by the sea was humid to the point of being rather like treacle pudding, and it was very, very hot, and the running stopped after two half-hearted attempts.

Almost all the tourists were friendly, middle-class Germans, and it was all very pleasant and relaxing around the hotel. Our hotel had a small, open-air children’s pool, in which the kids could safely be left unsupervised, but it was full of babies [aaargh!], which always makes me worry a bit about the purity of the water, and the astonishing range of insect life made the water like some kind of exotic bouillabaisse by mid afternoon. So we used to walk through the gardens to the much larger pool at the neighbouring hotel, which we were allowed to use, but there was a very strict rule that you had to wear a bathing cap. Since we knew about this in advance, we had brought a fine selection of coloured Speedo caps from with us – my sons and I had one each in light blue, dark blue, yellow and purple. Fantastic.

On our first full day, I took my two younger boys down to the big pool, the eldest having already been down there for an hour or so. When we got down there, the eldest lad decided he had had enough, and I took the other two in for a swim. We found we were short of one cap, so I asked son no.1 to leave his (purple) cap with us, and he put it on the side of the pool while I got his brothers set up with theirs. When I got around to putting on the purple cap, I found it was no longer there, and there was a fellow right next to me in the water, wearing it.

I was flummoxed. If ever I have been flummoxed, this was that occasion. I indicated the gentleman’s hat.

I tried in my tottering German, same result – “Hat! Hat!” and a big smile.

I confess that at this point I began to shout at him. Meanwhile, some very large ladies in white coats – possibly their daughters were flight attendants – were also shouting, and pointing at me, making it very clear that I would have to have a cap or they would remove me from the pool in small pieces. This was getting very embarrassing, but it reached a wonderful climax as I was approached by an Englishman who had a moustache like David Niven’s, and a voice to match.

“I have a hat,” I explained, “that purple one – I think this gentleman has taken it...”

But when I looked around, of course, the hat and the gentleman had gone. David Niven raised a rehearsed eyebrow, and – I regret to say – thus provided a perfect focus for my hatred of everyone and everything on the planet, and I expressed myself to him in sufficiently short words to make it difficult for me to remain in the pool. Ultimately, I had either to retire with what was left of my dignity or else pay about 3 Deutschmarks’ worth of dinars for a very secondhand clear plastic shower cap, and swim around looking like a clown. I retrieved my sons and – breathing righteous indignation – stormed back to the hotel room. I hated already.

Back at the room, my eldest son commented that we were back very early.

“Someone took my swimming cap.”

And there, as you will have guessed, was the purple Speedo, on the dresser. My son, seeing the cap still lying on the poolside while I kitted out his brothers, had decided I did not need it and had taken it with him. I could feel the long, donkey’s ears growing out of my head, and started to think wildly how I could avoid bumping into David Niven’s brother and the innocent hat-nicking suspect during the next two weeks. I did not arrive at a solution in time. That very evening, in a dining hall catering for about 1200 people, the man with the purple swimming hat turned out to be at the next table – you wouldn’t expect that now, would you? He was disabled, in a wheel chair, and deaf, which is presumably what had made our discussion difficult.

Too late, I attempted to hide behind the menu card – he had spotted me.

“Hat!” he said, waving gaily and giving me a cheery thumbs-up sign, pointing at his head.

I smiled back, feebly, and returned the thumbs-up. My family laughed about it for weeks – in fact I still laugh at the recollection all these years later, but never without a spasm of embarrassment. 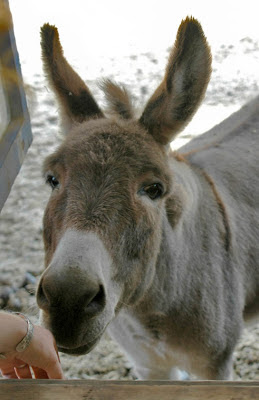