Following on from my failure to identify the correct provenance of the French Grenadiers à Cheval in my Box "J" (ex-Eric Knowles French Cav), I was sure that I had some more cavalrymen from this purchase with a very similar horse. Today I found them - in Box "K", which of course is the ex-EK Brit Cav.

Quite a few hussars. Definitely the same horse. However, where the Grenadiers had nothing at all marked on the bases, I found that the hussars did. Since I now had a little momentum going, I also checked out some OPC French Chasseurs à Cheval - very plain - which I had also approximately identified as Alberken. Here's what I found today... 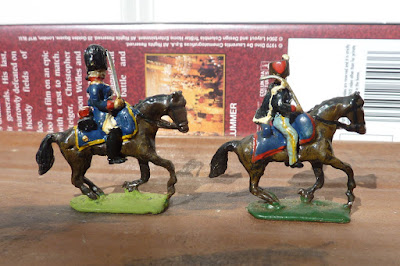 Here are the two figures with similar horses - the unknown Grenadier à Cheval (from my recent post) on the left, the unknown hussar I unearthed today on the right 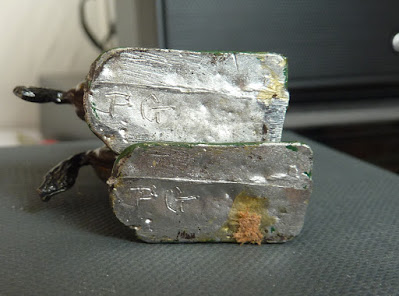 The bases of the hussars are clearly marked with a simple annotation - "PG". Well, well. 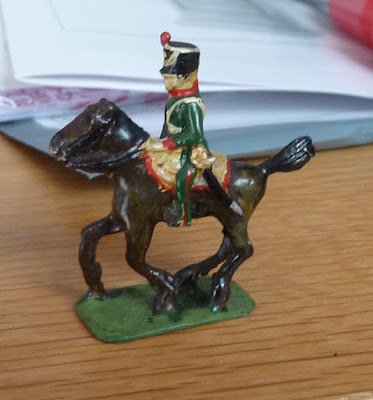 OK - slight detour - another unidentified figure, of which I also got a few from the Eric Knowles hoard. The sticky-up tail looks a bit more Alberken to my inexpert eyes - very simple figure - no weapons in hand, no carbine. 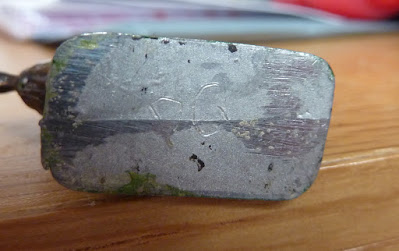 ...and this figure, too, has PG cast on the underside of the base. 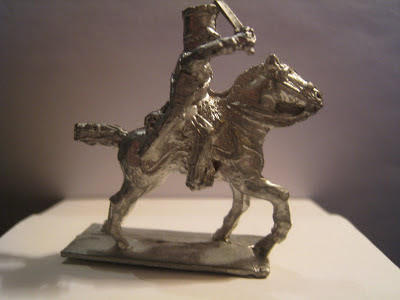 However, the figure is not at all like the known OPC Alberken Chasseur à Cheval, FNC01, shown here, so what I have is clearly something else. [Photo borrowed without permission from Lazy Limey's Wargaming Place - an excellent and much-missed blog]

So what? Well - not sure, really. I believe these figures are not Alberkens or Minifigs as we know them, but - knowing of Eric's close ties with Gilder - my guess is that these are probably Peter's work. Anyone know anything about these? They seem to be simpler and probably earlier than any Alberken figures I know of - any clues?