Peninsular War Zoom game took place yesterday - I was the host and the French commander (Marshal Victor), trying to capture the crossings over the River Mezquino, defended by a force from the Spanish Army of the Centre, commanded by Stryker (Conde de Belvedere). 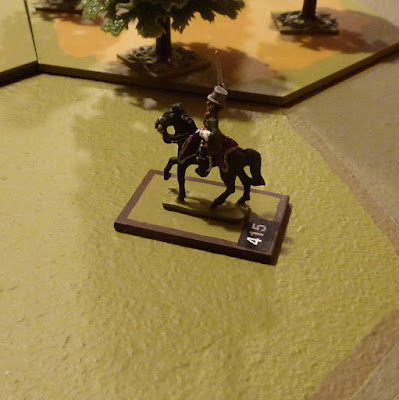 Gentusa - history makes little mention of this fellow, but he and his irregulars performed well at the Spanish defence of the Mezquino

The Spaniards had a hybrid force, including a contingent of irregulars under the command of the (little-known) Don Pedro de Gentusa. The French had Sebastiani's (French) Division and Leval's (German) Division, plus an attachment of cavalry from Latour Maubourg's reserve.

Commands & Colors rules, with my Ramekin modifications. I'll append the player instructions and scenario notes at the end of this post (if I remember). 10 Victory Points for victory - the French had bonus VPs available for capture of town hexes, bridge and fords at the town of Santiago. 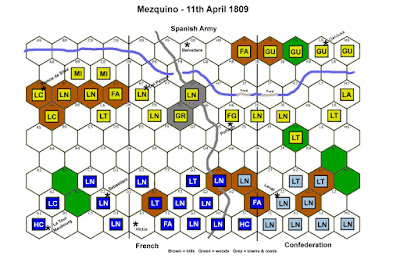 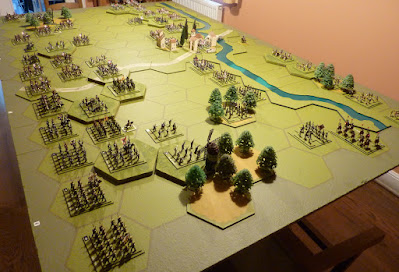 Initial view from the French right flank. The French have the Confederation of the Rhine troops at this end, and the French troops at the far end. On the other side of the table, the Spanish left is rather improvised, with irregular troops supporting line and light infantry; at the far end, on the Spanish right, two battalions of Milicias Provinciales are tucked safely away behind the line. 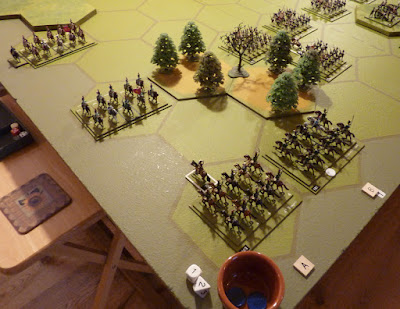 First action (to everyone's surprise) was an opportunistic attack by the Spanish cavalry, on their right, which discomfited the French 15eme Chasseurs, but was driven off with heavy loss by the 4eme Dragons. 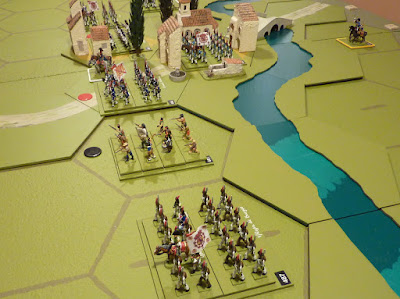 On the Spanish left, the guerilleros were brought forward early, to plug gaps in the line at the fords. At this point, a group of the irregulars is placed next to the elite Guardias Walones, which must have caused some disquiet to the guardsmen. Note that we used big red counters (for Zoom) to denote elite troops, black counters to denote the irregulars and the militia. Note also that the fords are a lovely shade of sky blue, as mentioned in Tripadvisor. 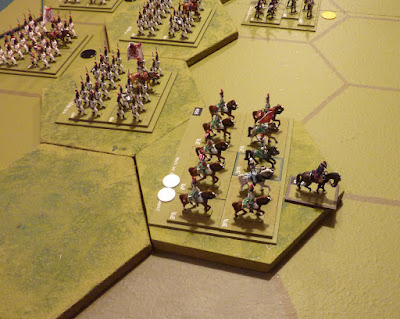 Back on the Spanish right, Colonel Ramos da Silva has brought his rather battered light cavalry back into the line. 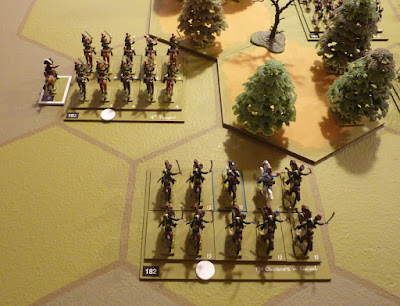 The French cavalry, having won their first scrap (on points?), are now shaping up to have a second round. 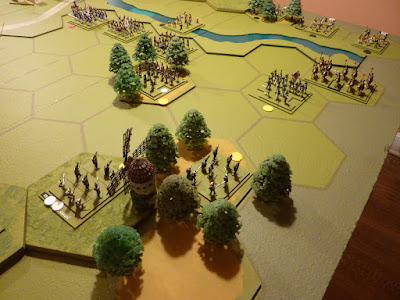 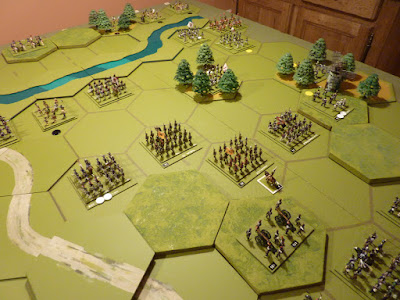 Leval's line troops move up - Nassau troops to the fore (yellow flags), with Frankfurters (oh, how we laughed) and Hessians in support. 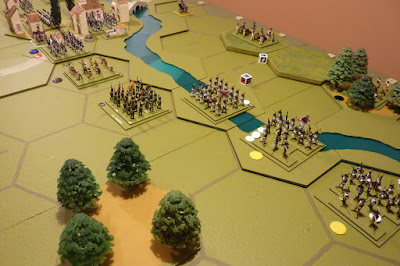 By some miscalculation, the 1st Battn of 2nd Nassau arrived at the fords all on their own... 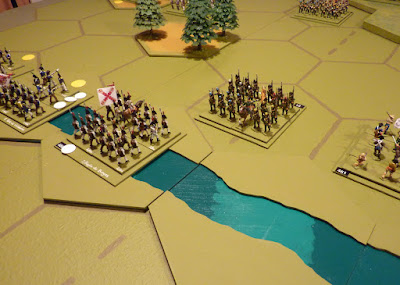 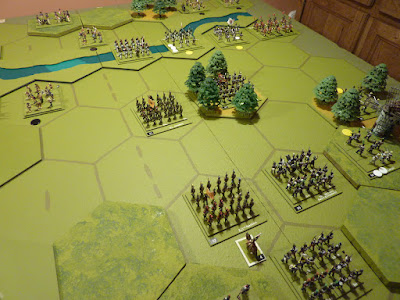 They were duly pulled back a little, then suffered 3 retreat flags to enemy fire (no losses, just 3 retreat flags), so their retiral was increased to 4 hexes (that's 800 paces) in one turn, ending up behind a hill, very much out of breath. This, as far as I recall, is an all-comers' record for running away in my C&C games (that's for non-Spanish line troops, of course...) 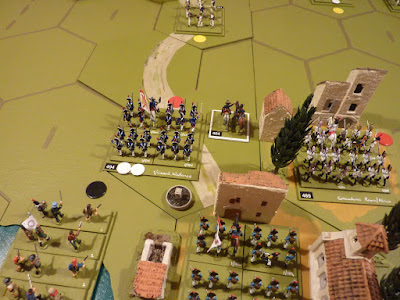 Here's a quick view of the town, which the French made a point of not attacking. In the town itself, you see the Regimiento Irlanda (light blue jackets) and a combined battalion of grenadiers. To the immediate left of the town you can see the Walloon Guards, who took some losses but were successfully rallied on two occasions, thanks to the presence of General Portago (a noted orator, apparently) 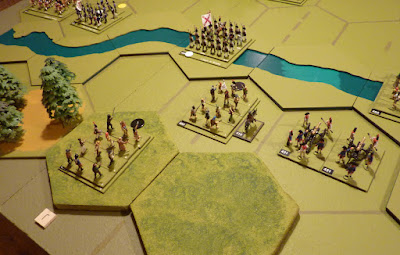 Now the Spanish left flank was re-organised, to prepare for a heavy attack from Leval's Germans, who were finally coming up to attack the fords 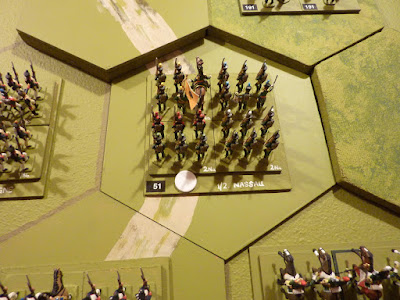 A drone shot of the 1/2nd Nassau, recovering their composure after their record retreat. 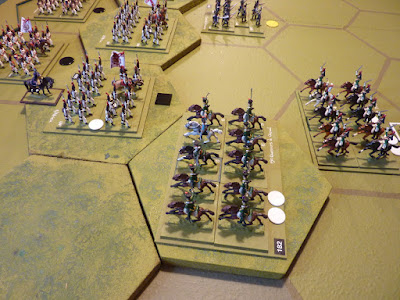 At this point, over on the French left, Latour Maubourg paid the Spanish cavalry a return visit, and eliminated them, and also forced the 1/Africa into square, but they were driven off by musket fire. 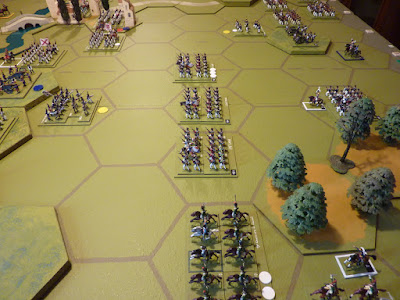 The French pulled back on the left flank, and did little further in this area - though a couple of battalions were sent to support Leval's men on the right. 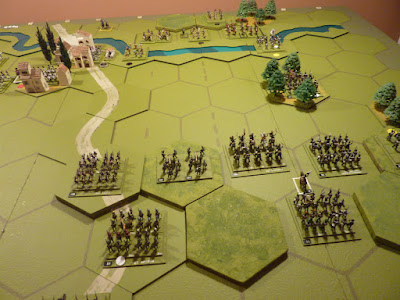 It had taken him a while, but Leval now put together a co-ordinated attack on the Spanish left. By this time, the Walloon Guards had lost interest in General Portago's rallying speeches, and had left the field. The Spanish left was getting very stretched. 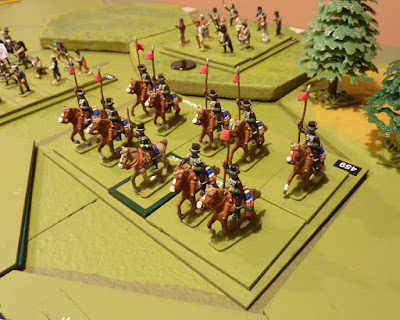 This little unit did a fine job on the Spanish left - the Lanceros de Carmona. Stryker made a series of little raids over the river (usually when the German advance had forgotten to keep back some spare Order Chips so that they could form square...). Like the guerrilleros, these lancers were a real nuisance, which is exactly what the Spanish commander was looking for. 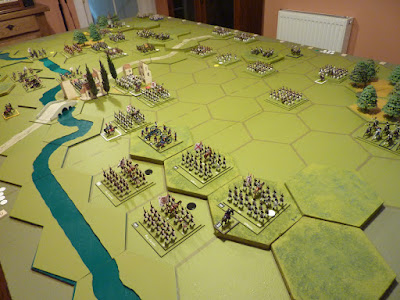 Here's a general view from behind the Spanish right flank at this stage of the action - at the far end, you can see the lancers being a nuisance, an activity in which they excelled. 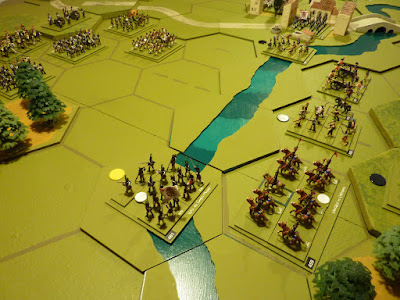 ...and now they've retreated again, behind the river. 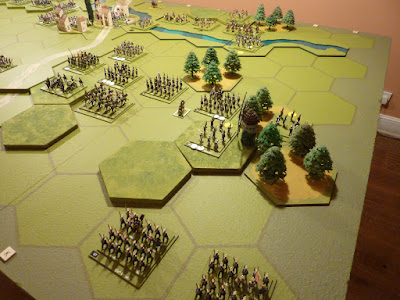 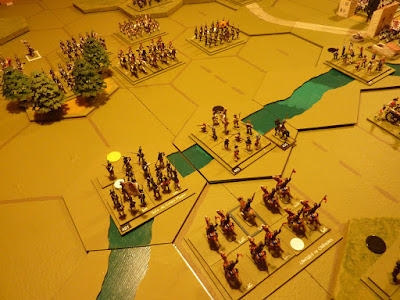 Now, as the guerrilleros do their best to cover the fords, the French bring forward some more cavalry - 26eme Dragons - to try to chase them away. 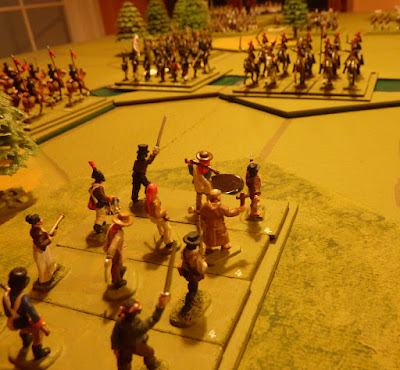 In the background, the dragoons have taken one of the fords. More of the irregulars prepare to meet them (note that the guerrilla units include priests, bagpipers, women, all sorts!) [Assortment of Qualiticast, SHQ, Falcata and HaT figures] 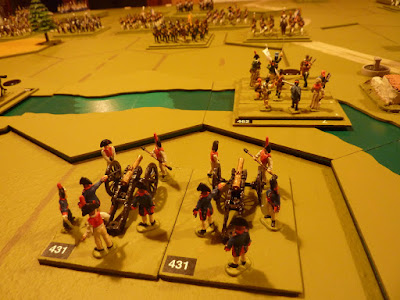 This is desperate defending now. 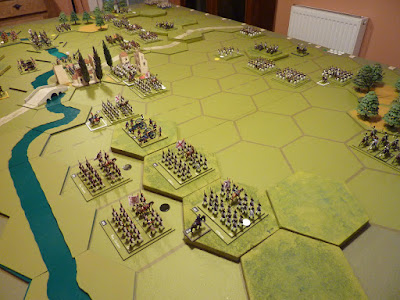 From the Spanish right, you can see the action is all at the far end...(!) 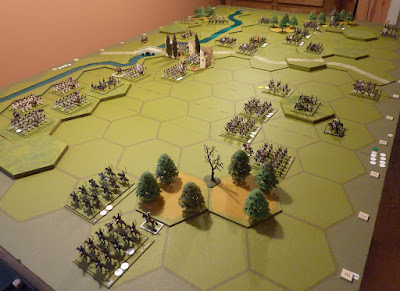 The dragoons now chased away the lancers, and the French had won the day. 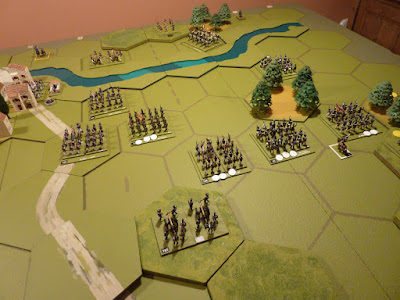 Leval worked hard to keep bringing fresh units into the attack, but this final view shows how much punishment the Confederation boys had suffered (each white counter is 1/4 of the unit eliminated). 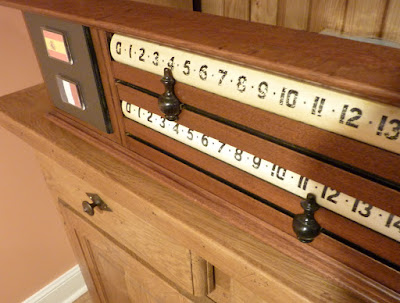 11.5 VPs to 4 sounds like a more comfortable victory than it felt like at the time! My compliments to Stryker and his army for putting up a gallant defence. An interesting game. It was an educational reminder of what the guerrillas are good at (being a nuisance, sniping at people, moving about quickly in difficult terrain) and what they are less good at (frontal combat with regulars, and sustaining heavy loss).

My sincere thanks to Stryker for an enjoyable game. I said I'd include part of the scenario notes, so here they are:

From Division La Tour-Maubourg (from Reserve)

4 "battalions" of irregular infantry raised by the Junta de Aragon.

It is April 1809. A number of well-known events from the Peninsular War have not happened, and as a result a French army is advancing from Madrid towards the Spanish Army of the Centre, which is commanded by Marcial de Campo Gregorio Garcia de Cuesta, and is camped in the region around Cuenca. Cuesta is 68 years old, and in poor health, and is in any case well-known for his difficulty in making decisions, and for concocting grandiose strategies which waste time and achieve little.

His army is in good shape, but his senior officers are mostly inexperienced and lacking in talent. The army is brave and well equipped, but many of the troops are new recruits, understanding of battlefield drill is generally weak. The particular weakness of this army is an inability to manoeuvre in action. Thus they will fight well enough in a defensive position, but are at a disadvantage if they are required to attack, or maintain any kind of effective fire while advancing. The Provincial Militia units are the worst, and the irregular "guerrilleros" provide by the local Junta are unreliable and usually incapable of any action more formal than a simple ambush.

[One odd quality that the Spanish soldiers have is that they do not expect to be victorious, but if defeated they will retreat from the field and be ready to fight again within a week or so. The French will constantly be embarrassed by this resilience. They are used to defeated enemies committing to a formal surrender, not dusting themselves off for the next round.]

The French army is under the command of Marshal Claude Victor-Perrin. On  the road to Cuenca, there is a crossing over the Rio Mezquino at the small town of Santiago Martir. The river is, for the most part, deep with steep banks, but at Santiago the road to Cuenca crosses the river over a good stone bridge - the only one for some leagues in either direction - and a couple of fords, and the river may be crossed for a mile or so on either side of the town (though not by artillery or wagons). The French are capable of constructing temporary bridges, but it will save them time if they can secure the crossings at Santiago.

Keen to secure the bridge before the Spaniards can destroy it, Marshal Victor himself leads an advanced guard - he has good quality German troops from the Confederation of the Rhine and veteran French troops of Sebastiani's IV Corps, and he has a small contingent of cavalry. His army is confident, since they are superior in most respects to the Spaniards, and their commanders are incomparably better. [The French despise the Spaniards, the Spaniards hate the French.]

Acting with uncharacteristic haste, Cuesta sends the Conde de Belvedere with a vanguard to seize Santiago before the French can get there, and to protect the river crossing, and so, when Victor arrives, he is surprised to find the little town and the hills beside it are already occupied by the enemy. Belvedere's force has been augmented by the addition of about 1600 irregular troops under the command of the little-known Don Pedro de Gentusa, a local land-owner - these irregular soldiers are fiercely patriotic, but erratic in performance - many of the "officers" being priests or community leaders.