The Armourer Visits - another stream of consciousness...

I was sorting out The Cupboard the other day, to get the French soldiers into a logical order (which helps a lot with setting up and putting away - any Chief of Staff will tell you), and to make space for new and impending arrivals. While thus employed, I removed a couple of small trays of odd bits and pieces which some untidy beggar seems to have left in there, and I found a little stand of Spanish guerrilleros, which has been in there since September 2018 (I checked), waiting for me to repair a sword that I broke.

I have to say at this point that breakages here are very few and far between - probably because I am extremely timid about roughing up my troops (a legacy of being the owner of delicate Les Higgins figures for so many decades), and they spend their lives glued onto MDF bases, which are magnetised and mounted on permanently allocated sabots; I don't remove casualties and the armies spend their off-table time locked in The Cupboard or in specially-prepared A4 box files. [I think I was severely traumatised at the beginnings of my wargaming career, when at my local club it was considered macho behaviour to shove handfuls of figures around in heaps - fortunately they were mostly S-Range Minifigs, as I recall, which can stand a great deal of rough handling.] 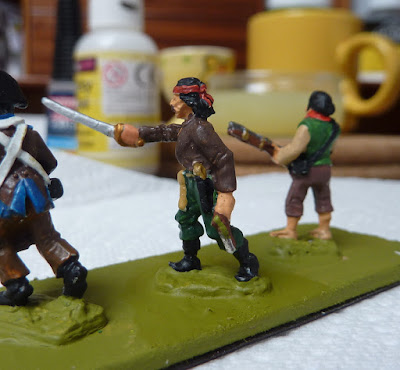 The repaired sword - Alfonso is as pleased as anything. His neighbours, I think, are SHQ - there are also Falcata figures among the partida bands. Qualiticast alloy does not bend, I learned.

Anyway, I had a breakage in 2018, and I remember doing it, and I've been wondering ever since what is the best means of repair, since this is not a strong part of my act. The basic problem is that the broken figure was a Qualiticast casting; they always seem to have used a hard, brittle alloy. Normally they do not break, but I caught a sword with my finger when I was tidying away one evening, and it just snapped off. Didn't bend, just went "ping" and snapped off, about 2mm from the hilt. [Before everyone rushes to tell me how I should fix it, thank you, but please read on...]

I eventually developed a plan for fixing it after reading an article from Archaeology Today about Bronze Age weapons someone had dug up. Glossing over the fact that Archaeology Today seems a strange title to me, what struck me was that these bronze swords were cast with a tang (aha!), a pointy bit which was fixed into the handle. That could be the correct approach for repair of a White Metal Age Qualiticast sword, I decided, though of course it took me a couple of years to get around to it.

Anyway, that's what I did. I filed the broken stub of blade off the hilt, drilled a hole (rather bravely, I thought) in the hilt, heading up into the chap's wrist, and spent a while filing the broken end of the blade into a short tang, as described, such as would fit into the hole. Some superglue, then an extra couple of thin coats of superglue to build it up a bit, paint and varnish and you're done - next gentleman, please. I shall look after it, of course, but you can't really tell it was broken. Good. Result.

I remembered that the game when Alfonso got his sword broken was a demonstration for the benefit of my aunt (no, really), and was one of two pre-production runs-out for what became the Ramekin mod I use with Command & Colors. Ramekin started life as a simplification of C&C, for the benefit of novice generals. It became rather awkwardly obvious that the simplified game, for a large battle, ran a lot faster and was at least as much fun as the official rules. And the rest, as they almost say, would be history if only anyone knew about it and was interested.

I also remembered that this Battle of Alfonso's Sword was a fictitious game which I've always intended to revisit, so that may be coming up shortly. Watch this space.