Still in the Boxes... more rarities?

Since I haven't yet tidied up the ex-Eric Knowles boxes or put them back in The Upstairs Cupboard, I did a little more digging around, and came up with these, which might be of interest to people, like me, who care for fossils: 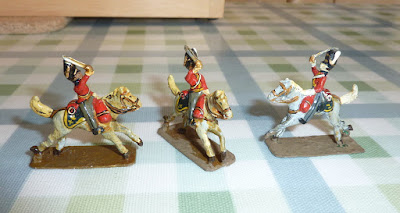 Here are some very dashing Scots Greys - I can almost hear the cinema organ. From the general style, I would guess these might be Alberkens (the official catalogue number is BNC 2, which I have never seen, even in a photo), but these are mounted on sheet metal bases, and - though badly faded now - the paint job seems to have been pretty fancy at one time. No markings - someone did a unit of these for Eric. 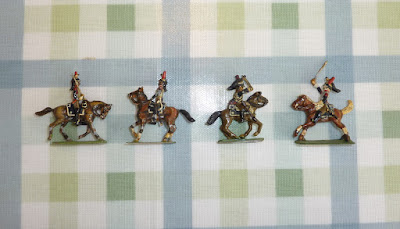 For comparison here are some French cuirassiers: (L to R) a couple of Greenwood & Ball, a Hinton Hunt OPC (FN 102) and an Alberken OPC (FNC 3). The Greenwood & Balls mostly have sheet metal bases, and appear to have been improved - I can hear the shouts of "Tradition!" from here... 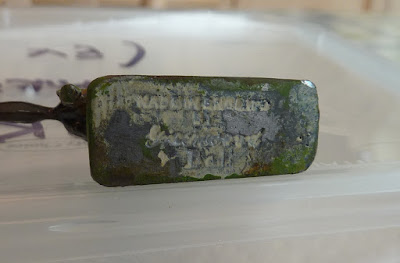 ...but no - hold your horses (!) - one of them still has the original, cast base, which says "MADE IN ENGLAND by Greenwood & Ball" - this doesn't show up too well in my picture, but, if you want to see it more clearly, place a piece of thin paper against the computer screen, and rub gently with a soft pencil... 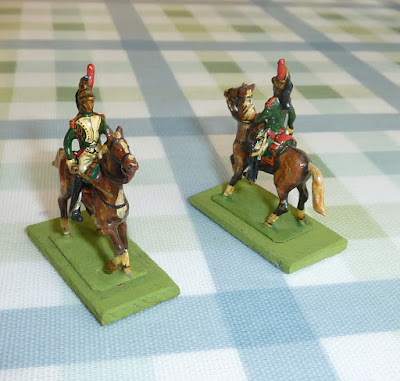 So, having established that there are some (tweaked) G&Bs present, here are a couple more - this time dragoons, again with sheet metal bases. These figures are very slightly tall and lean in comparison with Hinton Hunt (for example), but fit in reasonably well, as the pictures show, so - if you are more knowledgeable than I am about G&B (and most carbon-based life forms are) - then you can have a guess what period and range these come from. They seem too big for the three-quarter-inch diorama series. Anyway, G&B they certainly are, and 20mm too. 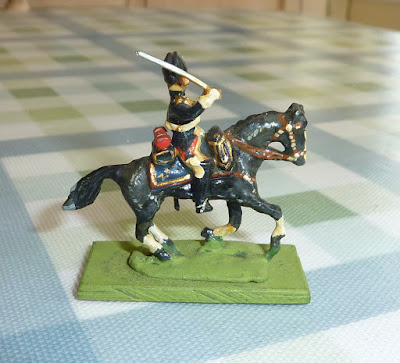 Here's a one-off - this is another of these improved OPC mounted figures which I suspect are both cast and enhanced by Mr Gilder - note that this is another of these distinctive, Airfix-style horses. This is very similar to the tweaked Grenadier à Cheval which started this whole study project, but this chap has gold epaulettes and a bicorn, and he has no musket, so I think he's supposed to be an officer for the mounted grenadiers. Because you won't see many of these around, I've done 3 views of him. Good grief - I thought I was ugly until I saw him. A number of the PG (?) figures show some corrosion of the areas of the figure which were treated with flesh-coloured paint - I've seen this quite a lot on old figures - I wonder what the paint was? Some lead in the pigment? 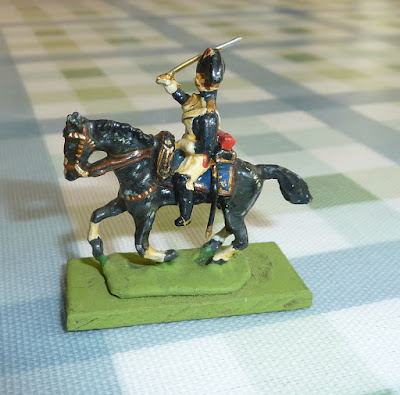 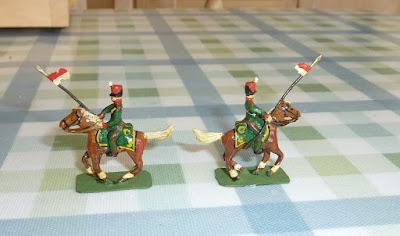 I also dug out, for a photograph, some samples of an ex-Eric unit of the 2eme Eclaireurs de la Garde, which have unmarked bases (in fact the bases may be sheet metal), and they look sort of like Alberken, though I suggest that they don't look very like the official FNC 4. I have plans to restore these fellows back to duty condition, though the 2eme Eclaireurs had a very limited service record, and have a very good chance of not being required for action very often. 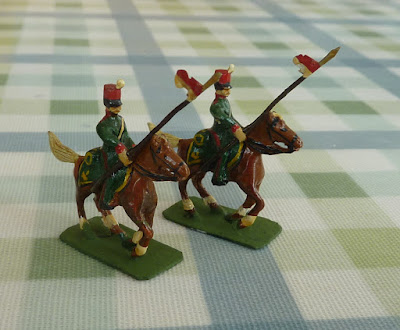 I hope you enjoyed that lot - time for me to get properly tidied up and get on with a sensible weekend - I hope to paint some WSS figures today, but we seem to have a North-East wind again, and the attic is perishing cold! 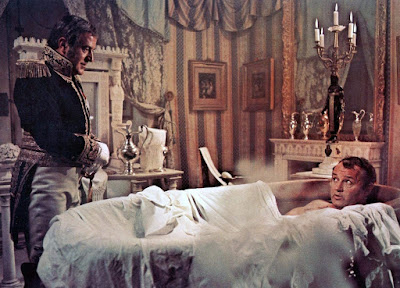 "I wonder what history will say about them, eh? You couldn't pass me the loofah, could you, Soult?"
Completely different topic - my DVD for the 1970 Waterloo movie has to be just about my greatest buy ever - I think I paid £3.90 for it, years ago, and I must have watched it over a hundred times. However, I observe that there is a BluRay version available. Now, I use a BluRay player, which definitely improves the quality of the picture from my DVD, but I was thinking about buying the BluRay disc. Some of the reviews on Amazon are really pretty terrible - subtitles in random languages, all sorts of issues.

A question: does anyone have a BluRay disc of Waterloo, and is it any good? I see there is a "Special Edition" to be released on 14th June this year - I feel I ought to get a copy!