WSS: Playtest at Mönchröden - the Game

Yesterday's playtest by Zoom went ahead - Goya very kindly commanded the Austrians. The game went quite nicely - I'm a little disappointed by how some bits of the rules played out, but that was the whole point of the exercise, and the labs are tooling up to engineer some fixes! The photos of the initial set-up can be found in my previous post. 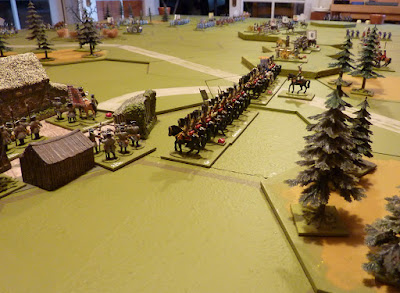 General photo, quite early in the action, showing the legendary General Graf Von Fugger lining up the Cuirassiers of Jung-Darmstadt and Gronsfeld, next to the small village of Hopf, which was manned by the 2nd battalion of the I.R Scharfenstein. A minor spoiler: the cavalry pictured here eventually won the day for the Emperor Leopold.

Brigade Mercy : Infantry regts of Lothringen and Thürheim (2 bns each)

Brigade Bibra: Infantry Regts of Scharfenstein and Baden-Baden (2 bns each) 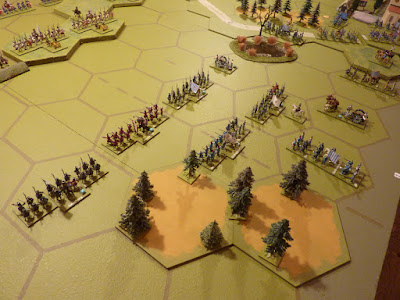 The Bavarian infantry got themselves all sorted out into line, safely out of range, and started to advance on the Imperial position. The Boismorel "Red Grenadiers" in evidence - first time out - surely things were bound to go well for them?.... 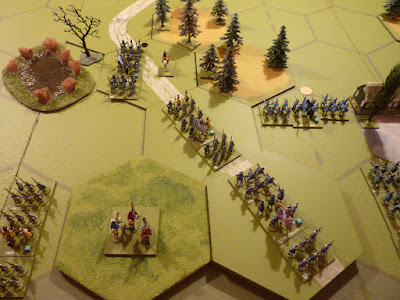 Over to their right, near the village of Sankt Johann am Röden, more infantry are busy countermarching, under the watchful eye of the Elector and his staff. The leading column has just come under fire from the Austrian battery opposite, of which more later. 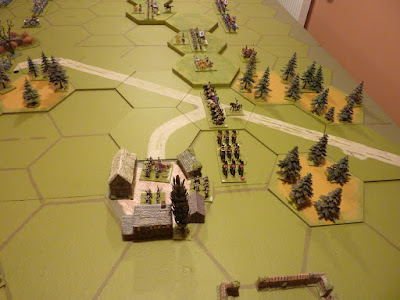 View along the Austrian line, from their left. Fugger's cavalry getting organised on this flank. 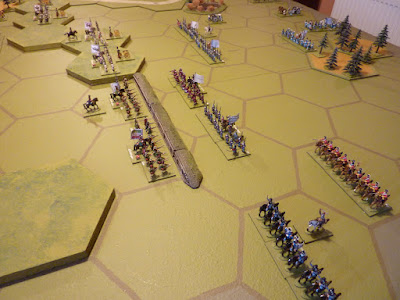 And here comes the Bavarian infantry attack - the bad news is that it was directed at some earthworks which the Austrians had dug the night before, but it was a playtest, after all, and everyone was keen to see what happened. 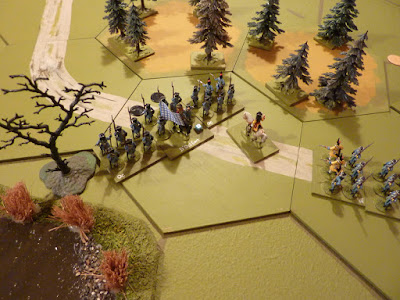 General Maffei (yellow coat) is devastated to watch the I.R D'Octfort rapidly accumulating hits from the artillery opposite, especially with the Elector looking on. 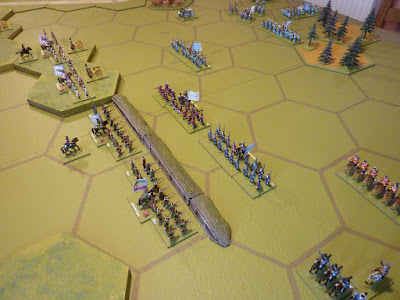 Back to the left flank - here goes! - in goes the charge - head first into the earthworks... 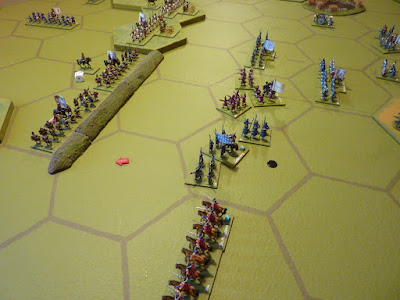 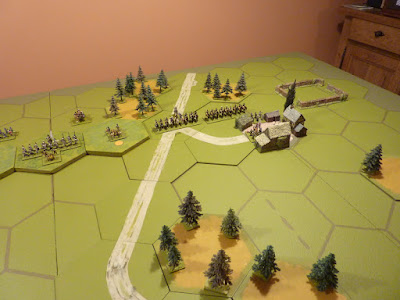 Meanwhile, on the other flank, not much is happening, but attention must be drawn to the Austrian battery on the ridge, marked with an ivory counter. This unit performed absolute miracles with the firing dice - all at long range, they quickly eliminated one infantry unit and an enemy battery. It was quite late in the game before this battery missed a shot. If this sounds like a severe glitch in the rules, let me reassure you that the Bavarian artillery, on the other hand, never hit anything all day. Chance does even out a bit over time, but sometimes the balance is not shared fairly by the two sides! 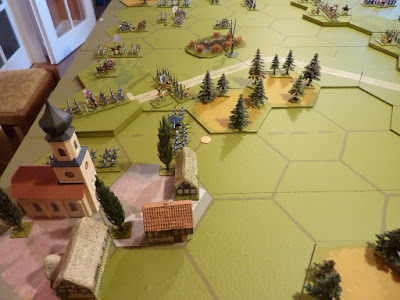 Things pretty quiet still at St Johann - the troops there not keen to venture out to face the artillery fire? 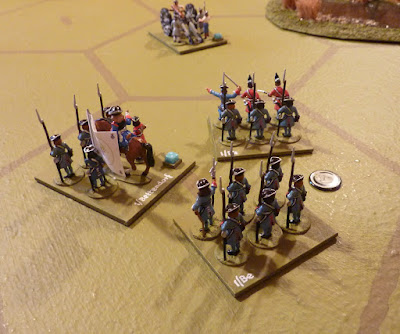 1/Bettendorf still not happy at all following their experience at the earthworks - they refused to rally, and eventually were swept away by the Imperial horse at  the end of the day. 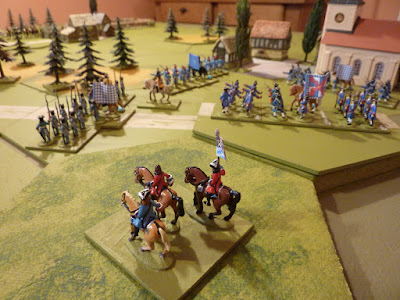 The Elector and his staff admire his troops at St Johann - note the grenadiers in the background, performing warm-up exercises for throwing grenades. 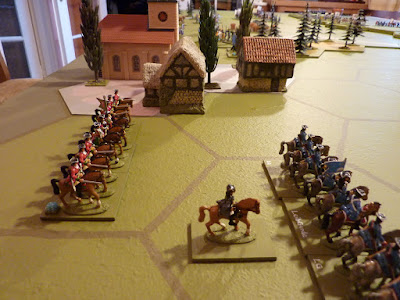 On the other side of the village, GM Wolframsdorf has his cavalry brigade all ready, waiting for orders. Household cavalry [Status 4!] in blue, Santini Dragoons in red. 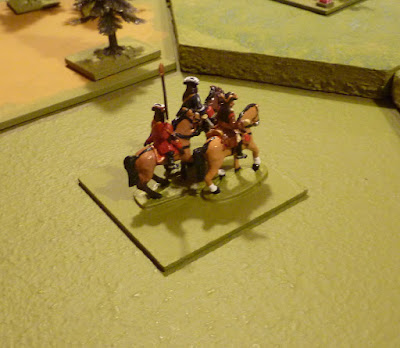 Somewhere across the valley, the Imperial C-in-C stand is present, smelling of fresh varnish. FM Styrum definitely displeased that the expected Imperial flag did not arrive in time - I've promised that I'll post a photo when the flag is done. It's only a small flag, for goodness sake. 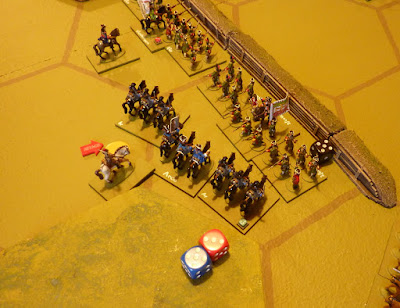 Back at the earthworks, the Bavarian horse has sneaked around the end - General Arco with his own regiment of cuirassiers about to eliminate some of the Emperor's boys from Lorraine. Yes - they should have designed the earthwork with end-bits, shouldn't they? [note technical terminology - I've been reading Chris Duffy again] 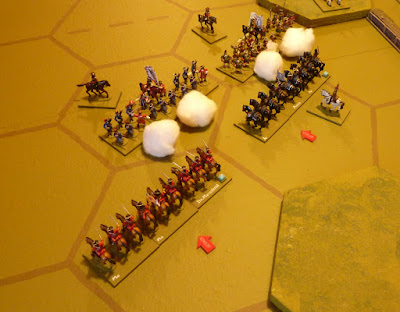 And Arco's brigade subsequently continued their attack on the Austrian right flank - the cuirassiers are on the right, Monasterol's Dragoons on the left - the cuirassiers did rather better in their melee. This is significant since it gives further evidence that dragoons are probably best when not used in this role, and also serves notice that these cuirassiers did very well, with a string of successes, taking the VP count from a 4-1 deficit to 5-5 [very nearly winning the day all on their own] and will be the chief argument for a major revision of the melee rules subsequently, so it is to be hoped that they enjoyed the experience. 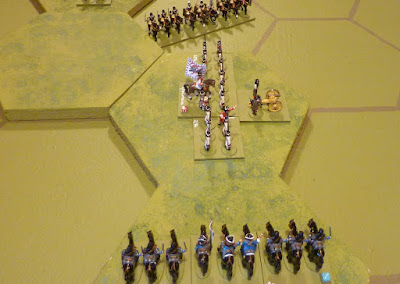 Still at it - the Arco boys continue on their merry way - here they are at this end of the picture, about to take out a battalion of the Thürheim regiment from the flank. 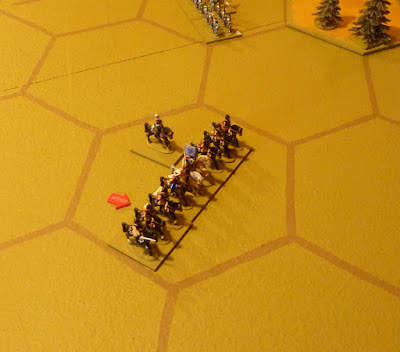 But Fugger, with the Jung-Darmstadt cuirassiers, mopped up enough damaged infantry units to win the day for the Emperor. His late bid for man-of-the match failed because he was overshadowed by the Holy Roman Artillery mentioned earlier. 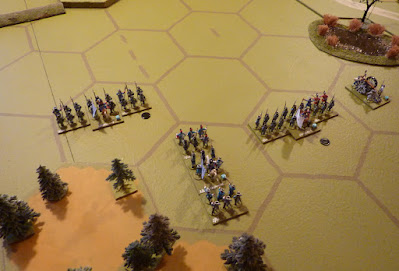 Some of the Elector's reserve troops, disappointed not to have figured more prominently, are left with nothing to do. The Empire has won 6-5... 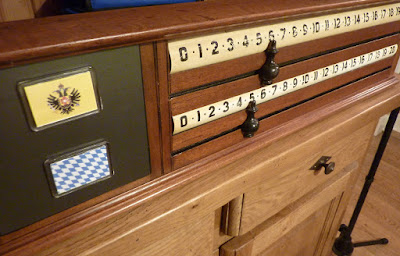 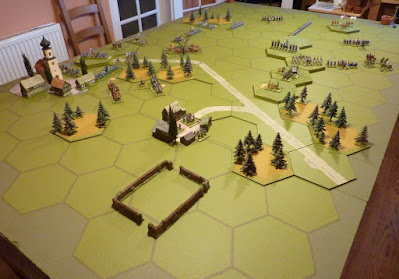 General view from behind the Austrian left, at the end of the game. Not much happened on this flank, but the Sacred Battery is still in position (practising misses at this stage), and Fugger's horse have cleared the area in front of the ridge, at the far end of the table.

Goya has promised (no - too strong - has offered) to send his thoughts on the rules. There were definite clunkinesses in a couple of areas. The game was still OK, in fact, but there were times when I was distracted, thinking what a nice, smooth, logical game Commands & Colors is. I'm sure it will be fine - I'm not really discouraged, but  there is a fair amount of sorting out to do. I'll put a rules discussion in a subsequent post.

If I don't get that published before Christmas, I hope everyone has a relaxing time. All good wishes!