A Little WSS Painting, and Some Light Reading Matter on Peninsular Sieges...

Even by my standards, this is probably going to be a fairly shambolic post as far as structure goes. If you're up for it, here goes. 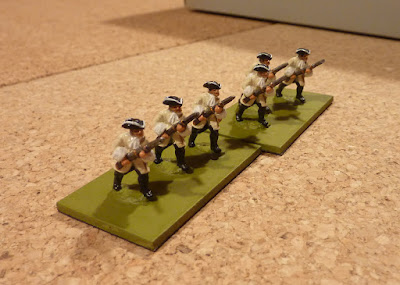 First off, I have finally painted up the dismounted contingent of my first unit of Imperial dragoons for the WSS - nothing remarkable, in any sense, but they have been hanging around, unpainted, getting on my nerves, for some months. The figures are 20mm Irregular castings. The unit is the Aufseß Dragoons, who were not Austrian, but from the Frankischer Kreis. The mounted chaps came from the Eric Knowles hoard, so my task was merely to paint the dismounted element to look fairly similar to Eric's brushwork. OK - good - all based and magnetised and in the official Very Useful Boxes.

Otherwise, I have mostly been continuing my work on preparing for some serious testing and rehearsing of some siege games. The big recent change, of course, has been the eventual publication of Eric Burgess's Vauban's Wars. All very good - I am on my third read-through and I have copious notes, getting ready to go. At this point it gets just a little complicated...

The obvious starting point would be some actual Vauban-style warfare, for which my new WSS armies would be ideal, except that, as yet, I do not have any proper siege artillery for them (though, of course, I soon shall). They could borrow some ECW units to help out, I guess, but that would be a disappointingly shabby compromise for a first effort. Therefore, by default, I shall start off with some Peninsular War actions, for which I have more than enough troops - even the specialists.

In preparation for this magnificent stage in my wargaming development, I have been collecting bits of fortresses, and mortars, and engineers, and all sorts, for ages, and have spent years reading about the sieges in the Peninsular War. The immediate issue arising here is that most of what I have read has been a collection of heavily British narratives about Ciudad Rodrigo (though only the successful Anglo-Portuguese siege, of course), and Badajoz (same qualifier), and Burgos, and San Sebastian - plus snippets about the Salamanca forts and so on.

Nothing wrong with any of this, of course, but two points come straight out of the woodwork:

(1) There were a great many sieges in the Guerra de la Independencia, of which only a few involved the British army. Having read more widely, and given a free choice, I would dearly love to follow the adventures of Marshal Suchet, conquering all those exotic Spanish-held towns in the North East - Tarragona, Tortosa, all that. There were the French assaults on Ciudad Rodrigo and Badajoz, as well, not to mention Sarragossa and some real biggies. OK - that's all excellent - plenty of variety.

(2) Spain and Portugal were relatively poor countries, and never had the resources (or priority) to carry out major programmes of modernisation of their fortresses. If you are looking for something like a modern, Vauban-approved style of fort, then there were very few - Almeida is one passable example. The range of defensive architecture involved was remarkable - which, again, is good for the student and the gamer because of the variety and because of the exotic places involved. Astorga was basically a Roman fortress in 1809, and there were medieval and Moorish-style castles all over the place, with greater or lesser degrees of improvement.

Here you go - Vauban himself might have recognised Almeida as a viable fortress, though not when the magazines blew up...

Ciudad Rodrigo, as an example, had been modernised (a bit) in 1776 - the old, high, masonry walls were masked by the placement of fausse-braies in front of them - which served to give some protection from siege guns in the plains surrounding the town, but did not achieve the same amount of security from guns placed up on the Teson heights. Gradual patching-up of old fortresses to cope with the increasing power and potential of modern cannon was always going to be difficult, and these botched-together forts were not wonderful - that is why the style of the sieges tended to be "quick and dirty" - Vauban would have been surprised at the rushed timescales and the relative lack of science.

One other thing to think about is that the fausse-braie add-ons were usually made of earth. That's pretty crude, on the face of it, but the great thing about earthworks is that you can fire cannonballs at them all day without knocking them down, so additional tricks of the trade were developed - if you really wanted a hole in the enemy's earth banks, explosive howitzer shells were a necessary part of the assault. If you wanted to dig parallels in the dead of night, you had to use big parties of infantry to get the work done. 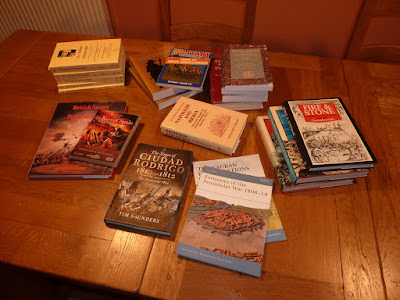 That's enough of this sketchy walk-through, I think. I've been doing a lot of reading (I seem to have acquired quite a lot of books over the years), and have enjoyed it thoroughly. One thing for sure is that it would be a bad idea for me to put a huge effort into tweaking Eric Burgess's excellent game right at the outset to cope with the local weirdnesses of the Peninsula, and thus I plan to move onto some proper Vauban-type gaming as early as possible. On the other hand, I have been very interested in the Peninsular War's sieges for a long time, and I am delighted to gain a little more understanding of how they worked.

Many of my English-language books consist extensively of quotes from each other. The most valuable original source (if you are happy to read French) is JV Belmas' Journaux des Siéges Faits ou Soutenus par les Français dans la Péninsule, de 1807 à 1814, published in 4 volumes in 1836. This is (or recently was) available as a set of pdf files from Google Books; if you are really interested and can't find a downloadable copy, get in touch and I may be able to provide some extra information. There are copious tables of equipment, ammunition consumed, losses, materials captured, OOBs and so on. Sadly there are no maps, though Lipscombe's atlas can provide some useful back-up.