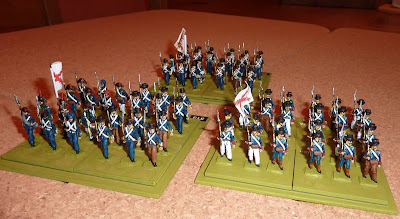 The castings are some more of what are likely to be very rare Falcatas - they are from my much delayed shipment of pre-production figures, and at present it looks as though full production isn't likely to happen. I quite like these little men, I have to say, whatever their pedigree, but those muskets have to be the thinnest and flimsiest yet seen on my wargames table. I have done some careful building-up of the muskets with superglue, but these guys will definitely be handled by the bases, and no mistake, and the mere fact that I have such impractical figures in use is pretty much a reflection of the fact that most of my gaming these days is solo, and casualties don't get removed. At least I'll know who to blame if they get damaged!
Posted by MSFoy at 17:04