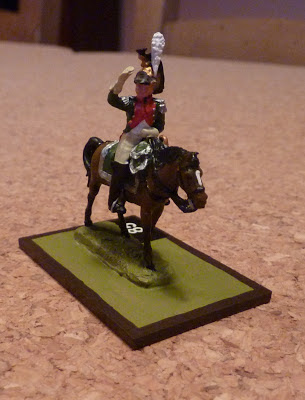 A very small painting project completed – this is Colonel Piquet, of the 6eme Dragons, who is required to command one of the dragoon brigades of my Armée de Portugal, circa 1811-12. No big deal, and – as ever – my painting isn’t much to write home about, but I find this little figure quite interesting.

The officer himself is by Phoenix Model Developments – previously Les Higgins Ltd – and was mastered by Tim Richards around 1975. As I keep mentioning, the Higgins/PMD Napoleonic horses were not wonderful, and I regard them as particularly unsuitable for a brigade commander, so I have mounted Monsieur Piquet on a more sedate animal, courtesy of NapoleoN Miniaturas. The reason this is of some interest is that, during the brief spell (2008/9?) when they were producing the Higgins/PMD Napoleonic range, NapoleoN were giving serious consideration to offering their own horses with the PMD cavalry, as an option. I have always thought this would have been a good idea.

This particular pairing is not as brilliant as I had hoped – the rider comes from the period when PMD were trying a bit of sneaky upward scale creep. No matter – it is a well-known fact (disprove it if you can) that Piquet was quite a tall man, who had a favourite small, wiry horse which was ideal for the rough conditions in .

Anyway – say bonjour to the colonel – I like him well enough, and the combination of castings gives a little glimpse of what might have been if NapoleoN had possessed stamina to match their flair.
Posted by MSFoy at 13:14