Following on from my recent mention of Anschluss Publishing, I've now bumped into them again - twice, in fact, in quick succession - which usually means - well, something or other. 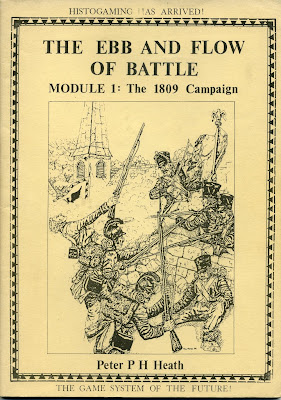 Firstly, one of my foreign spies sent me the booklet for The Ebb and Flow of Battle - Module 1: The 1809 Campaign, published 1988, which includes rules and notes on the historical campaign and OOBs. Interesting - pretty good, in fact, though I would not care to use the rules for a game. Some nice ideas in there, to be sure, but written orders, which is a screaming NO for me, and some surprisingly detailed tactical manoeuvring for a 6mm Grand Tactical game designed to handle army-level battles. No dice - all situation/table driven. He who knows the rules best shall win, a doctrine which is normally paraphrased as rewarding generalship.

I am also, most unreasonably, prejudiced a little against any rule set which claims to have captured the "true flavour" of the period, though - since I am patently not a real general - I would not claim to have any level of expertise in the true flavour. I am not really offering serious criticism of Ebb & Flow here - I'm sure it gives a good game. On a fairly gentle reading it does not look like my sort of thing, but that is hardly the authors' problem. I do like the idea of fighting battles using armies which are historically correct, rather than based on balanced points totals, and I also am comfortable with the fact that this means that sometimes one side will have no chance of winning, but will require to demonstrate its generalship by losing as well as they can!

Anyway, Histogaming has arrived, it says on the cover, though it took 25 years to reach me.

Anschluss also came up in the context of the scoping and planning for my proposed trip to the Danube in September. John C has very kindly lent me - among a pile of other useful stuff - Peter Heath's little booklet on Wagram, which has some tidy maps along with the narrative, though the OOBs are presented in wargame form. This booklet predates the Ebb & Flow one by some 3 years, and recommends the use of rules which are accurate yet fast in use - in particular WRG's 1685-1845 set. 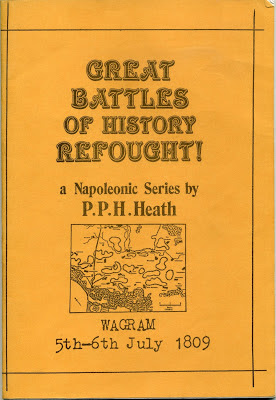 There is/was a whole set of these booklets - several sets, in fact, since they covered 1809, 1813, 1814 and there are also Franco-Prussian titles (I think). They are not easy to get hold of - I found some secondhand copies at Abebooks and elsewhere, and they were certainly not cheap. I have managed to track down a copy of the booklet for the Battle of Thann, but there are also, for this campaign, a number of other titles in this Great Battles of History Refought series for 1809 I would like to have a look at.

If anyone has a copy of any of these they would be prepared to lend me for a week or two (I only need them to take some notes for my initial planning) or sell to me (not too expensive - I don't need them that badly, and would be planning to re-sell fairly quickly!), please do get in touch.
Posted by MSFoy at 15:59