WSS: Just One More, Then

Time to tidy up my brushes and paint pots, and get my desk cleared ready to fettle some more figures for proper painting. The plan is to get another package of WSS soldiers away to Lee later this week. 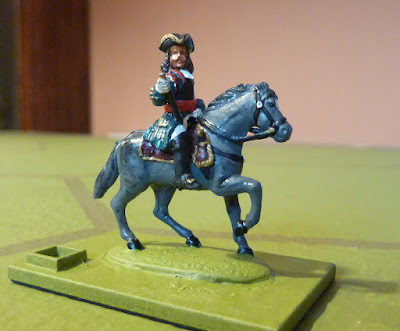 Since I was pleased with my work on generals over the last week or so, I did one more quickie before the tidying starts. This extra figure is one of Eric Knowles' veterans - a wash in warm water, a bit of freshening of colours and some minor chip repair, a coat of new varnish and we're done. Otherwise the figure is as it was when it arrived here 3 years ago. I have no idea what the uniform or the army is, but this period is great for randomly dressed officers. The number of minor principalities which took part, and the complicated (and sometimes fleeting) alliances, not to mention the vagaries of personal vanity and non-military garb, all mean that a General officer will never go to waste - there is plenty of scope for lending them out as need arises!

Nothing particularly special about this man and his horse; this is Les Higgins MP23, the only mounted officer in the original range, complete with baton. One noteworthy point in this case is that this really is a remarkably clean, sharp casting, so it must be a very early example. This fellow must have spent many years lying in one of Eric's cucumber boxes, in his best fighting gear, just waiting for the call.

His cuirass and general appearance suggest to me that he might be a German of some sort - maybe a cavalry commander - but which army he will appear in is up for grabs. Whatever - willkommen.

Ironically, a small parcel of new W&N Series 7 brushes arrived from CurtisWard yesterday, so I'll look forward to getting them into operation sometime soon, but for the moment, apart from being carefully counted and checked over, they can have a rest until my next painting session.