A number of threads - of childhood nightmares, and of my failed career as a political activist...

This story is partly prompted by a piece of old junk I found when I was clearing my mother's house a few years ago - a sort of souvenir of my early teenage years, from a time of no little uncertainty and personal anxiety. 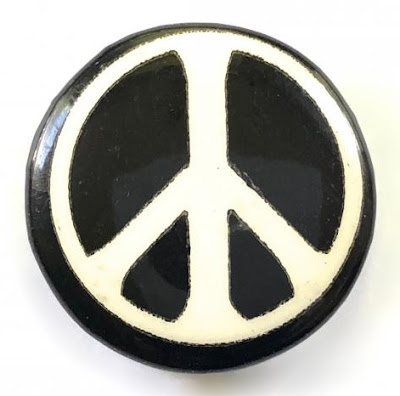 I've been watching the goings-on in the USA and elsewhere on TV, and, I'm afraid, I've always had a tendency to expect the worst. Usually, over the years, I've turned out to be unnecessarily pessimistic, but I guess I must be a slow learner.

I've always had some kind of Doomsday syndrome, I think. I was born in Liverpool, a city which was very badly smashed up by bombing during WW2. When I was a little kid in the 1950s, on the bus with my mother, travelling into the city centre to buy shoes or something, you could see the damage, still very much in evidence. Liverpool did not have a lot of money to rebuild, and these areas would have been a low priority anyway - there would be plans somewhere to demolish the whole lot for redevelopment as soon as possible, but all I could see were the gaps in the streets - if you travelled from the Dingle to the Pier Head, along Park Road or Mill Lane, which ran parallel to the river, within half a mile or so of the Southern Docks, every 5th, 6th, 8th, 12th house would be missing. These blitz sites gave me the horrors. Real nightmares.

Liverpool took a pasting in May 1941, when the Luftwaffe had bases near enough to put on massed raids - destruction of the port and the docks would have been a big strategic blow against the UK as a whole. The local defence chaps did their best, with searchlights and barrage balloons and AA guns and all the toys, but they stood little chance. The bomber crews would fly in over Warrington, and on a clear night they could see exactly where the targets were, as the river reflected the moonlight; they just flew along the East bank of the Mersey. Easy. 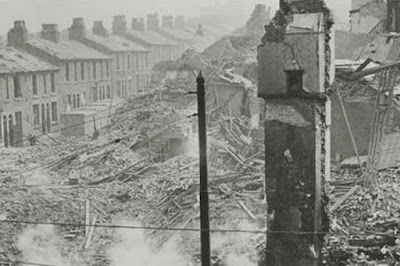 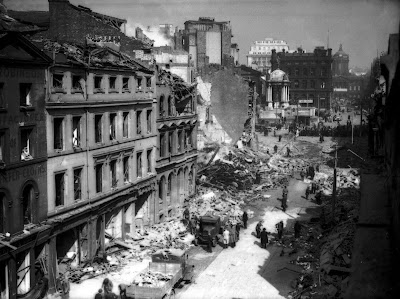 The actual air-raids were years before my time, but that whole story made a big impact on me - I guess I was a rather insecure child anyway, but the idea that some outside force could turn up and drop bombs on your house - I mean your kitchen, your toys, your mum, all the comfort in the known world - that was just devastating. I was really very obsessed with this stuff for years.

When we moved to Mossley Hill, a little further out into the suburbs, Saturday morning trips to the shops in Rose Lane now took us past the district Civil Defence HQ next to the railway station, and they had signs up on the walls telling you what you would have to do when the nuclear alert came - where to go, what position to assume, what you should take with you, what would happen. Not "if" the alert came - "when". This was like the WW2 blitz on an even more nightmarish scale. And there was no end of public information films on TV - all my school pals knew how near to the blast you would have to be to be vapourised, and we all knew that if you were not vapourised then things would be particularly grim thereafter. No wonder some of us grew up a little strange? 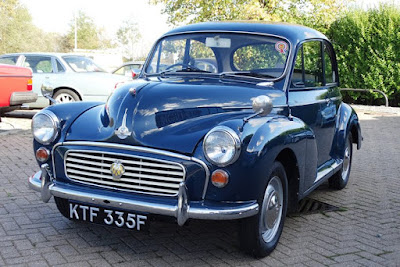 I remember going on holiday with my family - my dad hired a motor car, a real treat for us (it was a Morris!) - and we went down through the towns on the Welsh border, spending a week in Cornwall. At that time, I wasn't interested in anything - there was no point - we were all going to be vapourised anyway, so what could possibly be the point? My schoolwork was suffering, I had given up all my hobbies. On the holiday, at one point we reached a key moment - we were in the car park at Land's End. It was blowing a gale, it was cold and there was horizontal rain. My dad told me that for goodness sake I should cheer up a bit - this was a famous place, and I should enjoy being there - I might never have the chance again (in fact I've never been back). I was unimpressed - I knew that, like everywhere else, one day soon there would be a big flash in the sky (it might be over there, or it might be over there) and everything would be vapour and rocks.

At one point I took advantage of a free period at school, sagged off, took the bus into town, and visited Progressive Books in Mount Pleasant, up the hill from the Adelphi, towards the old University, and bought a small supply of CND badges for me and some fellow pacifists at school. I believe they were one shilling and sixpence each, by the way. The badges disappeared like the proverbial hot cakes, and I was commissioned to return to the "Commie Bookshop" for a further supply. No school uniform this time, either - anarchists didn't wear school uniform. The people in the bookshop were very kind to me, and obviously tried not to embarrass me, but they produced some leaflets (political - oooh...), and asked would I like to take some of these for my friends, and they were having a meeting the following Saturday if we would all like to come. I imagine I left at a good, brisk trot, without the leaflets. I delivered my load of CND badges, and the world moved on.

Not quite - I've always had that ability to see the Apocalypse coming over the hill - yet again - here it comes - 3rd time this week. That's why, when everyone was excited, watching the Berlin Wall come down, I was watching through my fingers, waiting for the shooting to start.

That's also why, when the fat fools who are in charge of the USA and North Korea were threatening each other with extermination recently, I felt that old, familiar sinking of the heart, and wondered why they couldn't get some grown-ups to do these jobs. I do hope Mr Trump doesn't frighten any little children in the world - being a child is scary enough as it is.

That's not much of a story, probably, but a lot of the shaping of my views is captured right there, however silly it may seem. That is how we were brought up - maybe I was a good boy, and reacted the right way. Maybe not. Whatever, I've always been a mug for any casual Doomsday story.

In passing, many years later, when I was married, with a young family, and striving to make ends meet, one birthday time I was given my Annual Appraisal at work by my boss of the day, who was a nice old boy - I liked him. As we finished the discussion of what I hoped to achieve, and how the professional exams were going, he said to me, "You're not still involved in the political stuff, are you?".

I was completely bewildered - I assured him I was not the slightest bit interested in politics, never had been, and he made a brief note on my file. I forgot all about it.

Many more years later, by which time I was a rather more important member of staff than I had been, something happened (was it the start of Data Protection?) and I was given the opportunity to see my personal staff file, by the same employer. I took the chance, and didn't think much about it, but in the miscellaneous section at the end was a handwritten note:

Active member of Communist Club at University and possibly a party affiliate of some sort - started at school?

I was dumbfounded - no basis for this at all. Untrue, in fact - not even close. Next to the note, in red ballpoint pen, my old boss, Bill (who had subsequently retired and was probably dead by then) had written: no evidence of this now, and that seemed to be the end of it.

It doesn't matter now, but I have sometimes wondered where that came from - what on earth was it about? I guess I'll never know - probably a mistake. Yes - let's assume it was a mistake. At least they haven't vapourised me yet, though I suspect they are working on it at this very moment.