The Last Trumpet - for the Moment 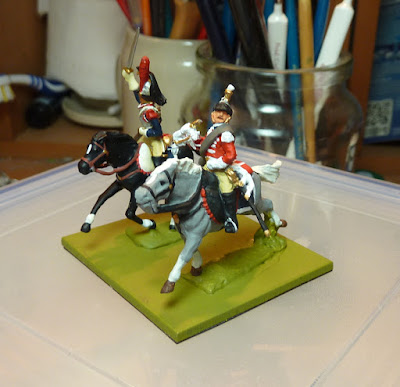 Last night I finished off the last of my little quartet of cuirassier trumpeters. This one is another Art Miniaturen casting - I have figures from two different Französischer Kürassiere Command sets by AM - one rather more recent than the other. The later set (which includes the chap in the photo) is more vigorously animated and more like modern plastic diorama box sets than the earlier one. This in itself introduces a very slight problem - it does limit the number of raw repeats; for example, the eagle bearer in the new set is bare-headed, having lost his helmet [duh], but it would be silly indeed if one had a number of cuirassier units, each of which had the same porte-aigle without a helmet. One such is OK, of course, but this is getting out of the normal run-of-the-mill for wargames figures.

A rather bigger surprise for me is that the newer set is a little bit larger than the older one. Nothing disastrous, but the Higgins/PMD troopers in my cuirassier division will be somewhere between the two sizes. Since all of AM's output is very officially 1/72 scale, and no messing, the idea that Herr Schmäling is introducing a smidgeon of refined scale creep is a novelty. Presumably the plastic sets with which he shares the market are getting a bit larger too? Who knows - whatever, it isn't a problem.

Just because it will cause trouble in The Cupboard if this guy doesn't get his photo on the blog when the other three did, here he is, at the top, with his PMD trooper mate. The more dramatic styling is quite fun - the two figures here are closer to each other in scale than the foreshortening effect of the camera lens seems to suggest. These are from the 2nd regiment - I'm definitely moving on to the officers now.
Posted by MSFoy at 09:56