My wife is a subscriber to a monthly magazine called Country Walking - yes, that's right, it's a walking magazine. In a recent issue, there was a little handout sheet - the purpose of the sheet is not really relevant, but the fact that it has an outline map of UK counties caught my eye, and I spent an entertaining half hour or so looking at it. 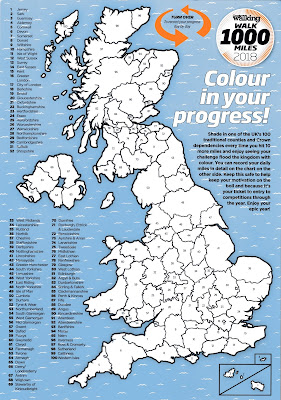 I was brought up in England - in Liverpool, in fact, which used to be in Lancashire in those days. The Counties were part of our education. I was interested in the fact that top class cricket in England was organised by counties (still is), and a lot of history is organised and recorded by county. Also, I suppose, counties identified the regional loyalties with which we were raised, and some of the counties have been more or less at war with each other for centuries. Once it was principally Lancashire vs Yorkshire, and now it seems to have become Greater London vs The Rest - I claim no particular expertise here.

Anyway, I had a quick shot at identifying the counties on the map - some of course are very easy for me, because they were local and I learned them when I was seven, some are a little trickier (I was very pleased to get both Nottinghamshire and Shropshire correctly, without cheating), and then I got a bit shakier on the Herts and Bucks and Wilts bit, and then I stopped with something of a shock. Just a minute - where's Middlesex? They've forgotten bloody Middlesex - and then I realised that this is not counties as we used to understand them - it also includes the more modern "administrative" counties - there is a correct and complete list of all of them, of course, and it is a mixture of the ancient counties which have apparently been there since long ago, and a bunch of other entities which sort of coalesced out of the ruins of the sad Regions concept (of which more later) which ran our lives between 1965 and 1996. As a very approximate rule of thumb, to use a Scottish example, while someone might just have Roxburghshire tattooed on his arm, since he was proud that this was where he came from, no-one will have Borders Region tattooed on anything apart from maybe the municipal garbage truck (assuming it isn't contracted out or privatised this week, of course).

So this is all a mixture of really old things and more modern concepts which gets us into matters of local government (a phrase which always seems to require a juicy spit at the end, somehow), and - of course - flaming democracy, which has a lot to answer for, but no matter.

It turns out that Middlesex is sort of included (replaced, anyway) for most practical purposes in Greater London, so I can understand that.

I got into problems with the Welsh bit of the map. When I was a kid, since Liverpool was traditionally the unofficial capital of North Wales, I had a lot of Welsh friends, and I used to go cycling and hillwalking in Wales, and spend holidays there. Of course, the counties I used to visit were Caernarvonshire, Cardiganshire, Pembroke - all that. All long gone, and replaced by Dyfed, Powys, Clwyd and so on. These are ancient names, with a nobility of their own, and probably have more traditional gravitas than the names I grew up with - I'm not sure how the boundaries line up, though, and I'm not sure if anyone has Dyfed tattoed on his arm. I'll take that in the spirit of positive change, and leave any Welsh readers to dispute the matter.

I was brought up to know that Rutland was the smallest of the British counties. I thought it had probably been a casualty of Regionalisation, and I was faintly surprised (and pleased) to see that it still appears on the map - at number 35 - and it is pretty small, right enough. But then I observed that Clackmannanshire (85) looks even smaller, so maybe Rutland was only the smallest English county, or maybe it depends on how you measure it. [Being a tedious fellow, I checked - Clackmannan has less land area than Rutland, but rather more residents].

At this point, I was having to face up to the fact that the organisation of the UK is one of those subjects I choose not to think much about, and just hope it doesn't come up in the pub quiz (in which respect it is similar to topics like the geography of what used to be the USSR, popular music after 1985 and the cast of East Enders - all dark areas for me).

I like the traditional names - while accepting that everything must have once replaced something even older, I was pleased when reading about the Covenanters and their army that the regiments were aligned with the places they were raised - places with emotive names like Clydesdale, Teviotdale and The Merse - these sound like real places, which someone would be proud to have as a birthplace - there was not a Borders Region regiment, for example.

A quick snipe at The Regions, then. Obviously Regionalisation was around for 30 years or so, and wasn't such a stupid flash in the pan as it felt at the time. I'm sure some wonderful work was done, and lives were improved - especially the lives of people who gained new, imposing job titles, with salaries to match. Some of the changes which were made in 1965 and 1974 in the interests of Regionalisation seem to have been carried out by some idiot bureaucrat armed with an official pencil and no conception at all of history or anything else. I recall that some towns moved between Lancs and Yorks, for example, which is an astonishing thing to do to people who had played cricket against each other, stolen sheep and protected their daughters from each other for centuries. Someone tried (unsuccessfully) to give Fife a new name - or include it in some inappropriate new area - I am delighted to say I can't remember the details. Previous mention of Clackmannanshire reminds me that for a while it disappeared into the wonderfully named Central Region. Now there's poetry - something to be proud of. We are the boys from Central. Hmmm. It's a bit like calling a region Up a Bit, and to the Left. Anyway, we seem to have recovered from that dark period.

Now I think about it, what happened to SELNEC (South-East Lancs and North-East Cheshire)? Was that just an early mock-up for Greater Manchester, or did some erk actually think this was a good name? It's a relief, in a way, to see that lack of soul and imagination is nothing new.

By the way, I now live in East Lothian. There was an East Lothian regiment with the Covenanters in 1643 (the colonel was Ralph Hepburn, who was a neighbour of mine from Waughton), but for many years the county was called Haddingtonshire. Hardly anyone knows this now - even in these parts - but old maps of parish boundaries and old regimental photos prove that it mattered to someone once.

Anyway, I thought I would share with you the little map, so you can play spot the county - or I suppose you could even colour it in if you have your crayons handy. Personally, I never go anywhere without my crayons if I can help it.
Posted by MSFoy at 13:09