Today, Count Goya - having a rare day off-duty from running his mysterious empire - kindly visited Chateau Foy to help with a first attempt at playing with my new Piquet Field of Battle rules. 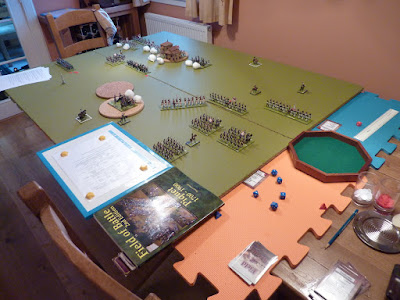 It all went pretty well, really - I have to say I've been doing a lot of homework in preparation. These days I find new rules quite daunting - especially a game as unusual in style and philosophy as FoB. We had a small trial action - about a dozen units a side on a very simple terrain.

Trying out rules requires a bit of mental adjustment - you have to forget about playing a game - and never mind at all about winning the thing - the trick is to try all sorts of suicidal cavalry charges against infantry lines and all that - to see what happens. That is the point of the exercise.

With hindsight, I'd have been better to follow Mark D's advice and start with a game where all the leaders and units were straight vanilla - as it was, I decided to follow the randomiser rules and create forces with units of varying quality, just to see how it went. This places a lot of reliance on the little stickers bearing the information for each unit, so it might have been a good idea also if I had made the labels big enough to read more easily(!), but no matter - it's all a learning process.

The game, it goes without saying, is intriguing, well thought out and, I believe, worthy of study. We were slow and halting today, as we had to discuss how the rules worked, and double-check just about everything (the rules manual is big and thorough, but it is not always easy to find the bit you are looking for among the numerous examples), so it was quite hard work, but we certainly knew a lot more about the game when we had finished. Familiarity will make it a lot more slick and straightforward, I am sure; my main problems today were to do with lack of facility in identifying and selecting the correct poly-dice (and stopping the damned things hiding in odd corners of the table), and with the fact that I'm really not used to a free-form (non-gridded) game these days - certainly not without a knowledgeable umpire to hold my hand. However you look at it, measuring everything is a bit of a pain in the wassname, and so much of the action today seemed to take place in odd angles between units, where the lack of space and the alignments never quite fitted comfortably with my limited understanding of how the rules work. Entirely my own problem, I appreciate. I would be very shame-faced to be starting thinking already about how the game might benefit from being placed on a gridded board, but it is hard not to!

I shall persevere, and I'm sure it will all seem more natural and feel smoother next time. We used a very basic terrain, so there's not a lot to look at here - the photos are really just to prove we got it on the table, and came out undismayed! I'm looking forward to trying again soon, but an early priority for me is to get a look at some more experienced players doing it properly, and I'm working on that, hoping to set something up.

My thanks to Goya for his company and help, and most especially to Darren for his commendable patience and sound guidance over the last few weeks.

Separate Topic - Nothing to do with anything: when I was checking out the Marston Moor battlefield a few months ago, it occurred to me that it would be rather droll to have the battlefield monument appearing on the tabletop for the miniature game. Doesn't seem so amusing now, I guess, but I was impressed enough with the idea to order a suitable specimen from a model railway supplier. In fact the item was out of stock, and the matter dragged on for long enough for me to become unsure whether I'd actually cancelled the order. Eventually I decided I had, and thought no more about it. Marston Moor came and went - twice, in fact, if you count the postponed attempt when we were snowed off. Long after everything was finished and put away and written up, I received an email this week to say that my monument was now in stock and had been posted, and it duly arrived this afternoon. It's quite a handsome item, I guess - it will have to appear in a battle somewhere or other soon, but in the meantime here is a picture, simply to commemorate the passing of a half-baked idea and the uncertainty of medium-term memory. Regard it as a memorial to all those good intentions that don't quite work out. I think it is probably generic enough to serve in a number of contexts and centuries, so no doubt we'll see it around.