I mentioned recently that I was not going to buy any more Tey Pottery buildings on eBay, since I have enough for my ECW wargames/sieges (in fact I am going to get rid of a couple of the less useful items) and, to be honest, I'm running out of storage space for the beggars.

I did, however, admit to a strong fancy to get my hands on a specimen each of Anne of Cleves' House (Lewes) and the Mermaid Inn, both of which looked splendid but regularly sold for far more than I was prepared to pay. Sure enough, I was lucky enough to land a nice, cheap example of Anne's house, but I held little prospect of getting the other one, which is much coveted (by proper collectors, in fact) and seldom seen.

Well, last week I was very surprised to see that some fine fellow was selling two Mermaid Inns on eBay simultaneously, at very reasonable starting bid prices. With little hope of success, I placed a modest bid on one and - by Jove - I won it. Even more surprising, the other did not sell at all. 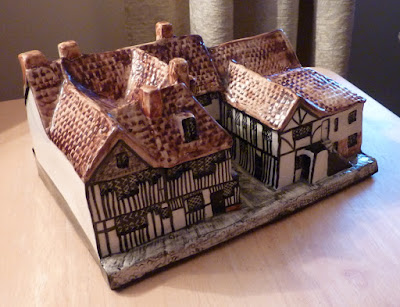 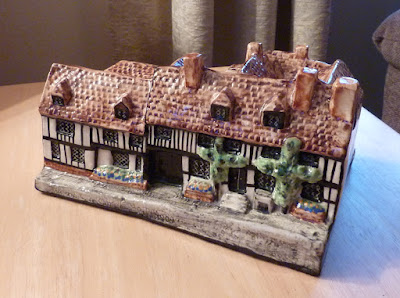 So here we have the Mermaid Inn, which I understand is in Rye, East Sussex (anyone ever drink there?). I have washed the spider poo off it, but have yet to "improve" it to the house standard, which means detailing the chimney tops, obliterating the pub sign over the door, repainting the ivy on the back (maybe that's the front, mind you...) and applying matt varnish, to get rid of that fearsome shine. This, of course, is why I have to avoid contact with the aforementioned proper collectors...

The real Mermaid Inn dates back to 1420 or thereabouts, though I understand the beer taps have been cleaned regularly since then. A fine addition to anyone's 17th Century town, I would say.

Storage - hmmm. I reckon I'm going to have to get rid of some of my Lilliput Lane houses to make room for these. That is definitely the end of the Tey collection - definitely. I have consciously resisted the urge to make a bid for the (even larger) Alfreston Manor, which is currently on eBay.