Hooptedoodle #392 - An Old Friend, Welcome Back

We had some new turf laid a couple of weeks ago, and it's been very dry weather since then. Though I've put the sprinklers on a couple of times, the new turf is definitely looking a bit rough.

Since the gardener is due to visit today, and since I am nervous about receiving a telling-off for not looking after the turf, I had the sprinklers going full blast on Tuesday until late. At around 11pm I put on the outside lights and went out to shut off the water. I was walking down the path when I realised that a hedgehog was walking alongside me - not bothered at all. I watched him saunter off into the hedge - I was really glad to see him. He may, of course, have been a her. 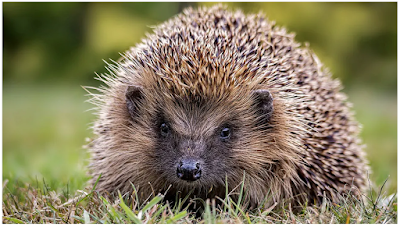 Not my photo - someone else's hedgehog, in daylight

I knew they were around - I've seen their droppings on the lawn recently. We used to get lots of them - I'm talking of nearly twenty years ago - you could hear them snuffling about in the garden at night, and in the woods at the back of our house. The hedgehogs used to suffer a few casualties - they sometimes used to get caught in the traps the farm ghillie set for rats, and one or two managed to get trapped in the lobster pots which were stacked opposite our house - one of the more complicated forms of suicide. Then they were gone. I suppose there were some around - we never saw any sign  of them. And now, after an extended absence, they are back.

Well, at least one is back. The photo is not mine, of course, it was dark last night and I had nothing with me to take a photo, but I'll try to keep an eye open from now on.

I'm pleased with that - over the years we've lost our Greenfinches and a few other friends, but the hedgehogs are back. Well, well.