On Thursday, Stryker and I will play a Zoom-based Napoleonic game. This one is a scenario snappily entitled "Sorauren (French Left)", which neither of us has played before, and is taken straight from the commandsandcolors.net scenarios. It looks like a slugfest, and I noticed after it had been chosen that there is no cavalry on either side, so Stryker and I are going to be wondering how to spend the first 15 minutes of the game, if there are no cavalry units to throw away.

I spent this evening setting up the field, while listening to a football match which I shall not mention again. There is something quite liberating about using someone else's scenario; whatever happens, it will not be my fault. I think these things probably do matter. It is different from my usual scenarios, since the field is quite bare and there are far fewer units than I'm used to. I may learn something here. 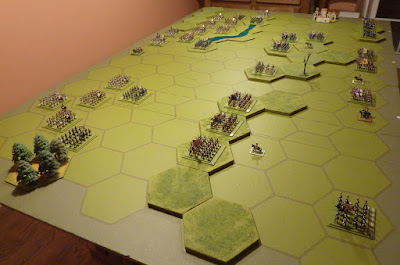 Initial view from behind the Allied left flank 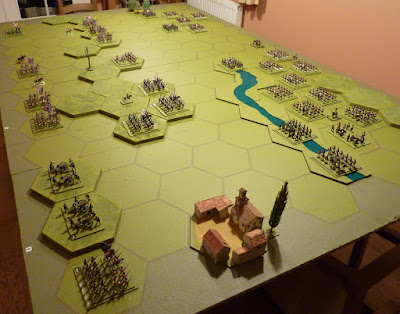 And from the Allied right 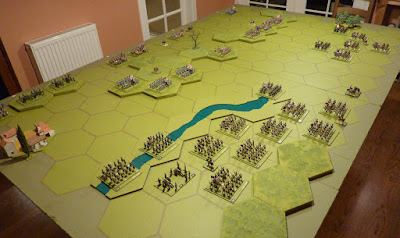 From behind the French left. There are bonus Victory Points for possession of the ridge just above the centre of the picture (with Spaniards on it). The French had better get cracking...

On the scenery front, I am delighted to announce that I've finally found Wellington's Tree (yes, it was in the wrong box), so it will be appearing, as is required by the terms and conditions of my franchise, and I was also delighted to find the missing top for one of my Iron Age Merit fir trees, this time in a box which has nothing to do with scenery at all. I have superglued the tree-top into place.

More on Thursday - rural broadband permitting, we have a 10:00 start.