More WSS - and now some Austrians

Continuing in the same way, I've now cleaned and re-based a couple of battalions of Imperial troops. I haven't done flags yet (because I need to confirm which regiments I want), and one of the new units needs a mounted colonel (I have a figure undercoated, ready to go). Les Higgins (small) 20mm figures - old. 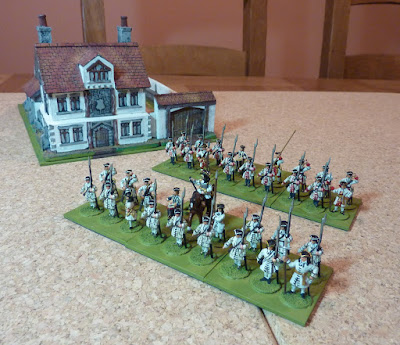 I am still working out the best arrangement of units in my draft OOB - I'm waiting for some more source material to arrive, to help with the reference, but it is somewhere in the Xmas postal storm.

This isn't going badly thus far - I'll get some more troops into the foot-baths tonight (old ice-cream tubs, warm water), to soak off the old bases - maybe 2 battalions plus a battery, or maybe some cavalry, so see how that goes. The units I have bought in were mostly already labelled up with regimental identities, but some of these don't quite line up with the dates I am aiming for, and I need to check out the Austrian facing colours!

So this isn't really a big step forward, but it maybe goes to show that I can do small steps quite quickly!

Once again, I have done as little re-painting as possible - the paintwork you see here, chip repairs apart, dates from the early 1970s. For some reason, the flesh colour on the faces seems to have faded, so I've freshened that up a bit.

The missing colonel I mentioned could be quite interesting - I have prepped an Irregular figure, mounted on a Higgins horse. As an experiment, I undercoated him in matt white acrylic, and gave him a wash over with Citadel Chestnut Ink, supposedly to pick out the casting detail. Erm - no detail showing, but the figure is now a nice, even, toilet-soap pink colour. Anyone remember Camay? The Contesse had a look at him, and assumed he was plastic! Nah - he's just pale pink.
Posted by MSFoy at 20:39