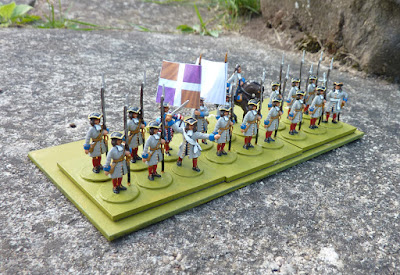 Régiment de Langedoc - 20mm Les Higgins castings, though the mounted officer is an Irregular figure on a Higgins horse
This is the last of the French units I propose to build by refurbishing Eric's men. There are still some figures left in the boxes, which may get called into service later, but the rest of the French will be virgin castings.

I wish you to know that I got bitten by ants while taking the pictures. Very small ants, but nippy! It is necessary to suffer for one's art.