[Since Blogger this evening appears to have become a competely new experience, I am pleased to have produced this post in a fraction of the time I expected, so I am about 36 hours ahead of my intended publishing date!]

On Wednesday I was delighted to welcome Stryker - who hasn't been here for over two years - to join me in a playtesting game for my developing WSS rules. I (as the Elector of Bavaria) commanded a Franco-Bavarian force, defending a ridge position against a slightly larger Austro-British army under the command of Marshal Styrum (Stryker was very taken by the impressively red British contingent!). 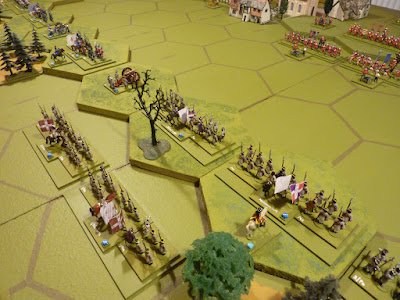 Since we were testing the latest version of the rules, some of the action deliberately involved some rather risky choices - just to see what happened (at least we will claim so). Normally, my playtesting games can be heavy going - on occasions they have verged on embarrassment - but this week's game went well, a large part of the credit for which must be due to Stryker for his enthusiastic approach!

Since I am waiting for a suitable supply of figures for French and British general officers, the battle was run by Bavarian and Imperial commanders, but no matter.

We set a target of 9 Victory Pts for the win. In the event the French side got up to 8-2, but then it was pulled back by the Allies to 8-5 and eventually we stopped at this score, since time was running out before Stryker had to brave Mad Max and his pals on the return drive on the Edinburgh Bypass, and we felt the remaining time would be better spent reviewing how it had gone, and which bits of the rules needed tweaking. In any case, the Allies had done so well to establish a good hold on the ridge that the scenario should really have included objective bonuses - point noted...

A lot of good stuff on the rules front came out of our game. Once again, I am deeply impressed by the extent to which these development challenges are improved by the two-heads-are-better-than-one doctrine. Very productive.

Some form of game narrative should emerge from the pictures. 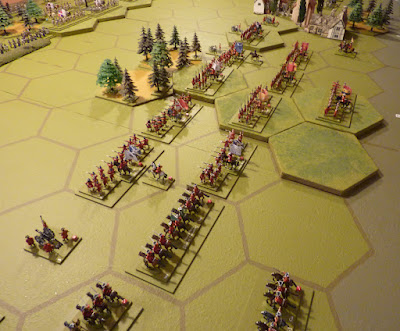 The Allied army, with the Brits on their left, start on the side of the table near the village of Ober Eschenbach 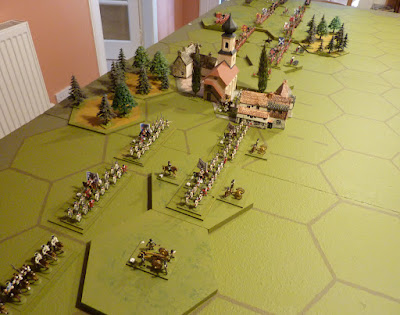 Still looking at the Allies, this time from the right (Austrian) flank. Note the famous church of St Michael the Plasterer - the village also included Shakespeare's birthplace, by the way, to give a suitably international vibe 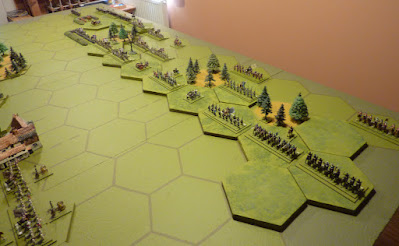 Here we get a look at the opposition, with the Bavarians (most of them) at the near end; the French troops at the far end are partly dug in, to cover vulnerable parts of the ridge - their army is rather smaller 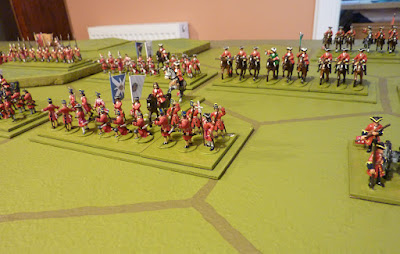 The Brits get themselves organised for an advance; here we see the Scottish Fusiliers (Rowe's Foot) and a glimpse of the artillery - still dressed in red in 1704. Below you see the Régiment de Poitou, two battalions strong, ready behind breastworks on the other side of the valley 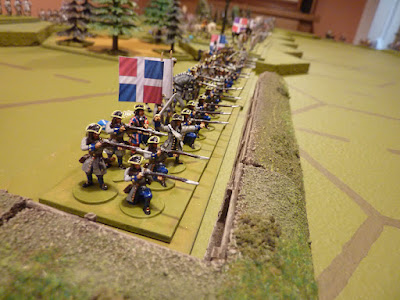 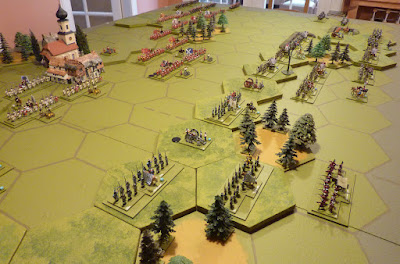 A general view as the Allied advance gets moving... 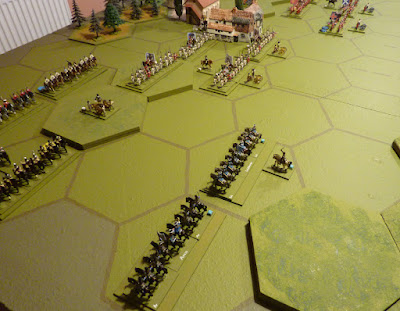 ...while (in the interests of rule-testing) the Bavarian horse attempts to bully their Austrian opposite numbers 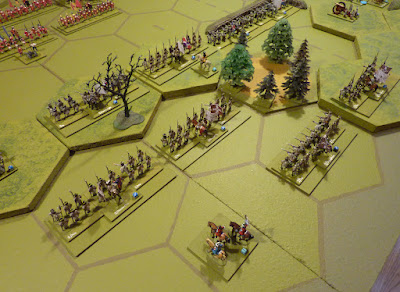 In this game, combat (which includes musketry at ranges up to 80 paces and hand-to-hand stuff) can only take place between units in adjacent hexes, so there are now a number of views of the field as the French wait for the Allied attack to come across the valley. Keeping the line straight is a slow and ponderous procedure! In the meantime, the French artillery did what damage it could, but wasn't hugely effective 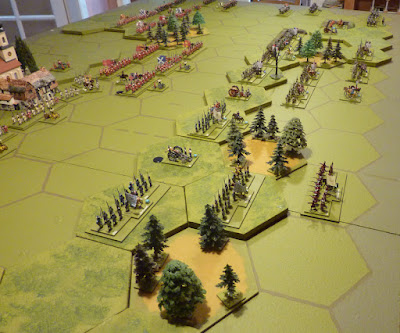 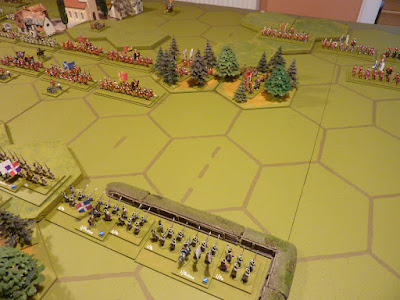 Note that a couple of the British units had to advance through some woods, which slowed everything down, but was handled well 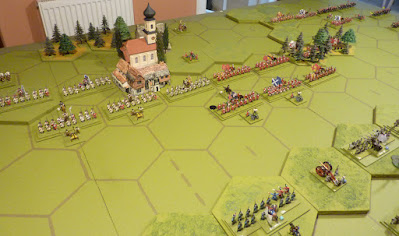 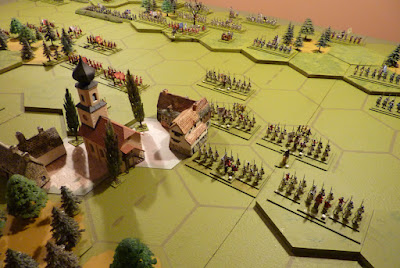 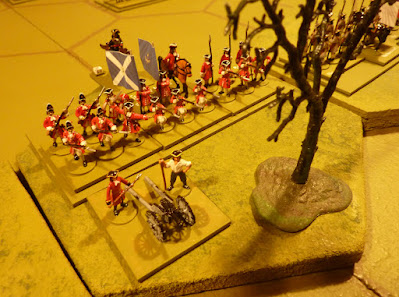 When they eventually got across to the ridge, they gained a couple of footholds quite quickly - here are Ferguson's Foot, aka the Earl of Angus's Regt, aka the Cameronians, reaching the objective at the "Elector's Tree", with their attached battalion gun to the fore 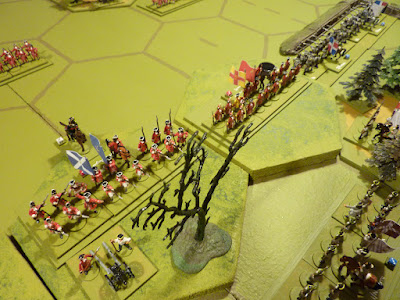 Another British regiment joins them up there... 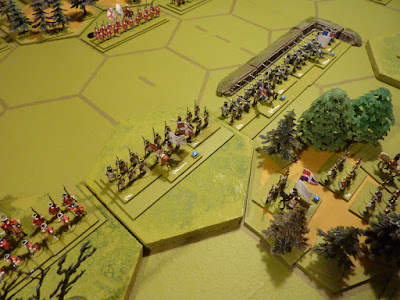 ...and is quickly driven off again by the recovering boys of the Navarre regiment 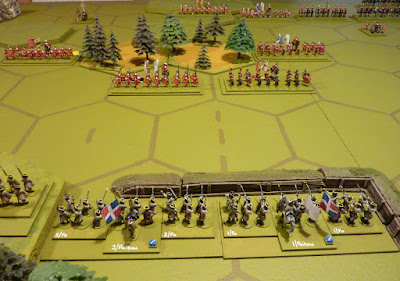 The Poitou lads did very successfully drive off an [experimental] attack on their earthworks, but otherwise were not disturbed much 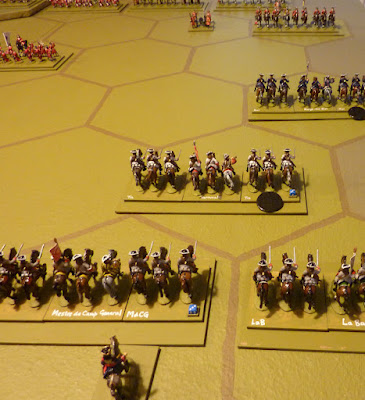 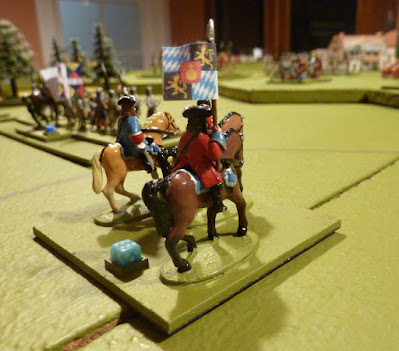 The Franco-Bavarian HQ, with the Elector possibly stretching his abilities a little, but having a grand day out 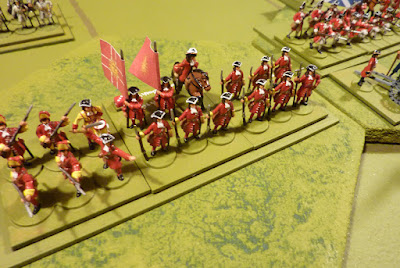 The ridge was gradually being overrun, as the Austrians joined in the attack 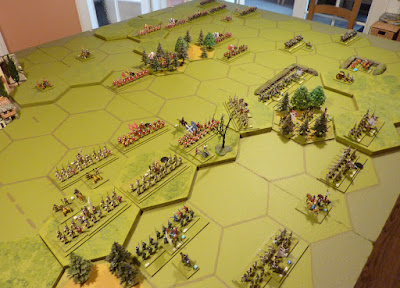 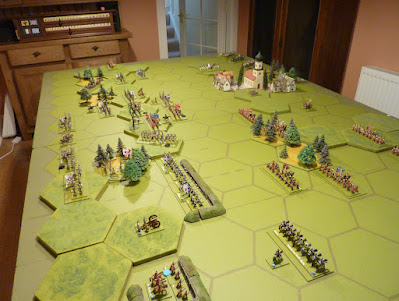 After 10 turns, we halted the game - the current score was 8-5 to the Elector, as you can see. In theory, the target was set at 9 points for a win, but in fact the straight losses tally did not reflect the success the Allies had achieved in taking the ridge, so the setting of victory targets becomes one of the areas of the rules which needs some attention!

Again my thanks to Stryker for his company and encouragement - a most enjoyable and useful day all round. I'll have some thoughts on rule fixes and maybe post about them on another occasion. For tonight, let me say that the latest revisions to Blogger, whatever else they have done, have allowed me to complete this post in a single evening, which recently is unheard of, and is a big advance indeed. Credit where credit is due...