Time to get back to the WSS refurb work, so I'm starting with some easy stuff - let's soak the old bases off some ex-Eric Knowles French infantry, and clean them up, ready for retouching. In fact these guys look pretty good - there are a few bent muskets to sort out (and associated flaked paint) but by and large these look mostly like a wash and varnish job. [If I had a pound for every time I've thought this, I would have - ooh - several pounds, I would think] 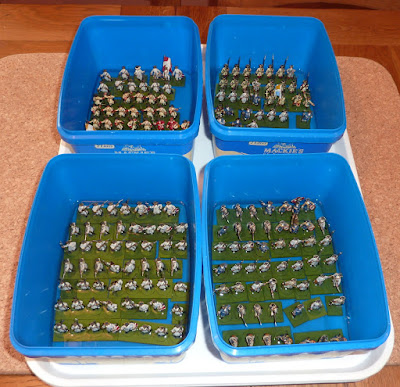 First WSS job in the queue, strictly speaking, is an Austrian regiment, IR Haßlingen (2 battalions), which is hanging over from Phase 1, so I'll get started with them. These French chaps, once I have counted them and sorted out what's what, can get boxed up as potential battalions, then the next footbath load will be some more French, from elsewhere. After that I'm looking at British and Dutch, and goodness knows where we get to from there, but first off I need to work out a supply of cavalry - I have a load of cavalry figures, but they are all strip-and-start-again stuff. There will be a shortage of vintage figures for cavalry and artillery, so I'll also check out what I need to get in from Irregular. I'm also thinking seriously of having two standards per battalion for both French and British, just for the look of the thing, so I'll have a look at that. I also rather fancy getting some mounted officers from Irregular to provide French colonels, since the no-cuirass look is better for them

So - one step at a time - these French chappies can be soaking for a few days while I get set up to paint Haßlingen. Once they are clean and I have played around at organising them into units I can decide what else I need to get in. Busy busy. Idle hands are the Devil's fake news.


Footnote: today I have switched back to the "legacy" version of Blogger, since the new one will not allow me to set up a new post. The new one also will not let me collect a folder of images, to be inserted one at a time as I require them. With New Blogger, as far as I can see, you have to upload your images as you need them - if you don't insert them immediately, in a single lot, you will lose the folder and have to upload them again. Oh well. The new version has been going fairly well, and offers some facilities the old one didn't have - no doubt I'll like it again in a week or two, but at the moment it is a pain in the erse.
Posted by MSFoy at 13:49