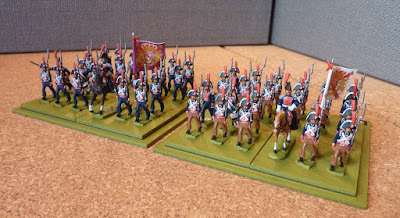 Painted and ready to go in the official box files, here are two battalions of the Guardias Españolas. They will form part of the Reserve Division of my 1809 army. 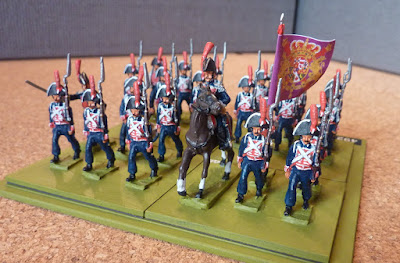 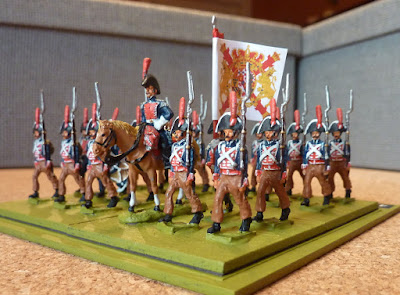 They've been in the pipeline for a while. Apart from a couple of Falcata interlopers in the command department, these are all OOP NapoleoN castings - the rank and file are a special conversion, with changes to the cuff detail to make them into guardsmen. My thanks to Old John, for duplication of the converted figures. I originally intended to field the units with a random mixture of blue and brown overalls, but for some reason it seemed pleasing for the battalions to be different - another aid to recognition on the battlefield, and also it seems not unreasonable that the Guard should maintain some vestigial extra bits of organisation appropriate to their status. Someone might suggest that the coronela flag for the first battalion should be purple with a pattern of Bourbon fleurs de lis - I'm aware of this flag, and if the unit had been intended for 1746 it would have been a banker choice, but my sources seem to be divided on what they carried in 1809, so I've gone for the majority opinion. If it's wrong they can live with it!
Posted by MSFoy at 10:20