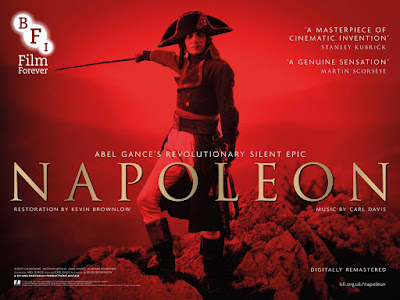 In a recent post, I mentioned that I have had another bash at watching Abel Gance's classic Napoleon, from 1927, in its restored and enhanced new edition, with magnificent new musical score, previously unseen material and all sorts of bonus wonders. I also admitted that I had made a pretty poor fist of appreciating it thus far, had decided that a casual "bash" at watching it is obviously not the best approach, and had determined that I would set about it in a more businesslike manner.

This, after all, is FILM as high art. Thus it behoves me to approach the matter in a suitably studious and appreciative frame of mind, and there is the other matter of potentially having to write off the £28 or whatever the box set cost me if I don't shape up. Deep down, though, is the awareness that it is not cool to have to admit that one has watched one of the acknowledged classics of the cinema - of all time - and has made nothing at all of it. This is not recommended as a chat-up line at arty parties.

The experience is not to be taken lightly - there are some snags. One is that the storyline does not always hang together well - the box set - all 5-and-a-half hours of the movie, plus some hours of additional material - is assembled from bits of a much longer, incomplete film series on the life of Napoleon which Gance had envisaged, and Gance himself had several attempts to re-edit what he had. Thus far, I have watched the first two of the four discs, and have got as far as the Siege of Toulon. There were plenty of points of confusion;  the second Act includes - completely out of context - the murder of Marat in his bath by the extremely foxy Charlotte Corday (played by the Mme Gance of the day, apparently); also, bewilderingly, the Extras section on the second disc includes a lengthy clip entitled the Centre of the Triptych, which covers the start of the Campaign of Italy, which is blatantly outside the scope of the story content of the remainder of this disc. Hmmm - some spinning of the head.

Let's revisit the timeline a bit here - the section of the film which now exists was published by Gance in a 5-hour "Opera" version and a 9-hour "Apollo" cut (cut??). The film in the box set (I think, though I cannot promise I fully understand this yet) was originally to be a section subtitled Bonaparte, which takes us as far as Arcola. Clarity is not helped by the frequent use of colours in printing the movie - by which I mean that it is not a colour film, but that it occasionally switches into monochrome blue (which makes the chaotic battle scenes at Toulon almost impossible to follow) or red, or whatever Gance decides is artistically appropriate. I also still have a problem with the acting - the inserted caption screens with bits of dialogue are few and far between, and some fairly routine exchanges appear to involve a level of melodrama completely out of all proportion to the subject matter. One has to remember that this was a very long time ago, and all the actors on view - including real giants such as Antonin Artaud - came from a theatrical background in which it was necessary for the dimwit on the very back row of the auditorium to realise that a cast member was rolling his eyes. Thus the acting is hammed to high heaven throughout. Remarkable bravura piece of hamming is offered by Artaud himself, as Marat in his bath, who crams more hysteria into a short scene than you would believe possible - and this is before he realises he is being murdered. 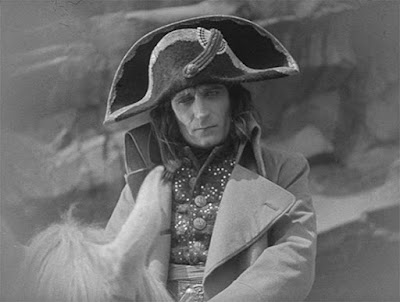 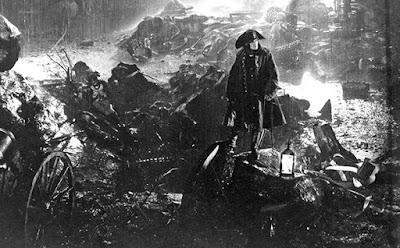 The puzzle of the out-of-context Extras material encouraged me to re-think my approach. I don't usually bother with the Commentary option on a DVD, but in something approaching desperation I have tried it on this movie.

Aha! A glimmer of daylight! The commentary is added by Paul Cuff, an expert on the works of Gance, and the author of a number of books on exactly this topic. Thus my new approach is, first of all, to watch each disc with the commentary switched on, and suddenly it all makes a lot more sense. Thereafter, I am all set up to watch it again with the commentary turned off, and I can enjoy the full spectacle and Carl Davis' lovely music soundtrack without worrying about it. This is a major investment of time, but for me it's the only method which is likely to work.

It is necessary to get very clearly fixed in my mind that this is not just a nice movie about the life of Napoleon. I need to have some understanding of:

(2) the history of the film itself, including

* Gance's intentions, and most of the screenplay was only sketched out when they started
* Gance's own adventures with successively cutting and re-editing his movie, given the drastic changes of scope it was subject to
* where the movie has been since, and the various re-issues for cinema presentation over the years
* the digital enhancement and restoration of the latest version, and the way in which it has been changed around to incorporate unpublished sections and to make the story hang together rather better

As a random example - in last night's (second disc) re-run, there is this young lady gazing adoringly at young Bonaparte - who is she? Well, the commentator explains that she is the daughter of a chap who was the general dogsbody at Napoleon's school at Brienne (on Disc One - who mysteriously manages to follow the great man throughout his subsequent career, and has duly arrived at Toulon, where he keeps an inn, in time for the siege), and that Gance had loosely planned that she would be a casual love-interest, though the scene which was to explain this has vanished. Further, the murder of Marat was to appear in a later (unpublished) reel, but was stuck into its current location to give a better fit with the historical timeline. You can see how this sort of insight might help.

So it's all good, now - the need for time planning is increased because of the double viewing, but it is a whole lot better.


I shall proceed with greater confidence. I'll start Disc 3 tonight - I'm now actually looking forward to it. If anyone has watched this new edition of the movie, I'd be very interested to hear what you thought of it. I've always had a little problem with the Great Art thing - ever since childhood, I have had a split view - one side of my brain tells me that this is a wonderful, enriching experience, and that it is a privilege to see it and marvel at the creativity and imagination which produced it, while the other side of the brain keeps interrupting with mutterings about my having no idea at all what is going on, and wondering if there are any scones left in the cupboard.