1809 Spaniards - The First of the Line Grenadiers 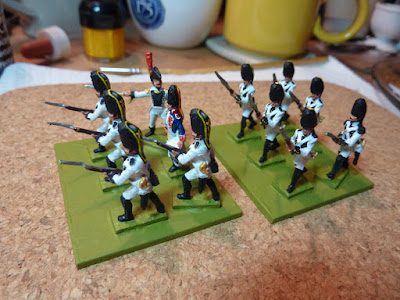 I've been very nervous about these chaps - the fancy embroidery on the flammes of the bearskins makes Spanish grenadiers of this period a bit of a nightmare for those of us who are rather below-average painters. In particular, this group from the Regimiento de Africa features yellow-on-black, which in my experience is one of the very worst colour combinations. They came out better than I had expected, and it was less work than I had feared, so I am encouraged to carry on with the next half-battalion. The drummer is a handsome devil, isn't he?

The Spanish system converged the two grenadier companies from each of two regiments in the same division, to form a provisional grenadier battalion. The other half of this lot will be from the Regimiento de la Reina, who have purple facings with white lace, so they should be a bit easier - they are undercoated, awaiting their turn.


These are Falcata castings - I think they are officially OOP - if they aren't then they should be; Uwe recently commented that I was lucky to have so many Falcata figures left - maybe so - the original sculpts are excellent, but the uneven casting quality and the amount of mould damage mean that only a smallish proportion of the figures are useable, and the re-carving and dremeling required to clean them up to a decent state for painting is reminiscent of Hinton Hunt in the 70s!

Anyway, so far so good. Subsequent grenadier battalions will use marching poses, which seem to be in a better state.
Posted by MSFoy at 22:15