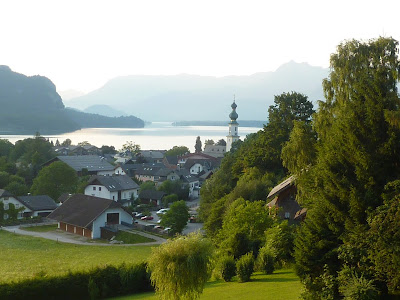 Just arrived on Summer holibags with the family. Nothing has actually happened yet, since we’ve spent a little time catching up with our sleep since we got here, but the place seems nice enough – hot, though. We are staying in the Austrian Salzkammergut, the . We are at , and it’s about 45 minutes into by the local Postbus route #150 – haven’t been there yet, that’s for tomorrow.

I’m gently getting on with my 1809 Danube campaign reading, and have been scoring some minor Napoleonic spotters’ points around these parts. The Austrian army’s crossing of the River Inn into , on 10th April 1809 took place fairly close to here. The left flank of the advance - the Armeekorps of Hiller and Archduke Ludwig  - crossed the river at Braunau, which is just a little way away, and the left flank was covered by Jellacic’s VI Korps, which was at itself, in the superb old castle. 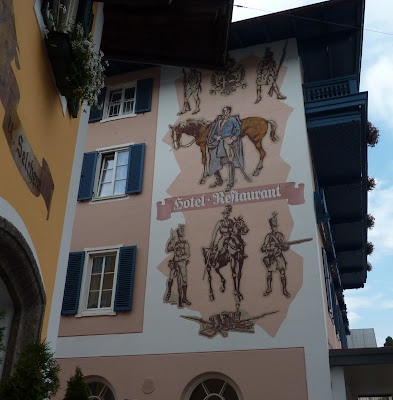 Only other thing I’ve seen of relevance thus far in the little town is a rather interesting establishment called the Hotel Radetzky, which has impressive murals on the outside walls of Wagram-period Austrian soldiers.

The picture at the top of the post is the view from my balcony at 06:30 this morning, which is pleasant enough, but I was especially taken with a little electric robot lawnmower which the hotel has clipping the grass in the early mornings and late at night. I’ve seen similarly inspired devices which clean the bottoms of swimming pools, and I’ve heard of one which vacuums the house while you’re out, but I’ve never seen one of these grass-cutting gizmos before. Not only is  it clever, but it’s also hilariously funny – my son and I happily watched it bumbling about like a demented electric sheep for at least half an hour, with Nick providing commentary subtitles, such as “uh-oh!” when it was headed for a tree or similar. It always sorted itself out of problem corners, though there appeared to be a few emergency stops. We keep expecting to meet it in the hotel’s corridors, patiently clipping away, keeping the carpet neat. 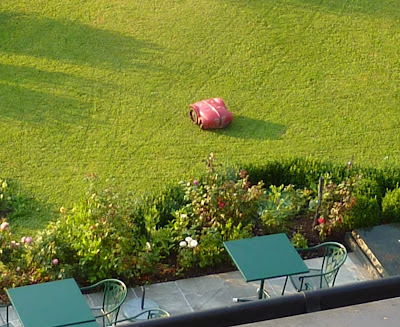 These things may be very common – possibly every home in has one – who knows? – but such technology is new to me, and we definitely want one. No matter that we would have to redesign the garden so that it would not have to cope with stone steps – there must be a way. Anyway, we want one, though we may have moved on to something else by tomorrow. This one is Italian, by the way.

Broadband wi-fi is not good here, and is switched off for large parts of the day – in fact I have a suspicion I may be hacking into a network I’m not supposed to, but I'll keep trying intermittently. 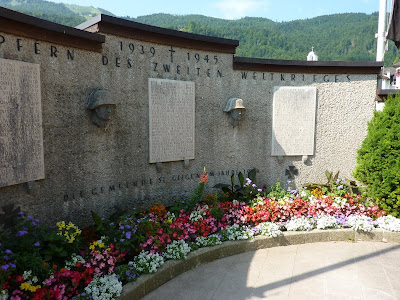 The little town has an interesting WW2 war memorial, which I hope to get a decent look at. We are going on a day trip to Berchtesgarten and the Eagle’s Nest next week, which I’m looking forward to, and the hiking and cycling potential around here seems very good, so once we’ve recovered from the 2-hours’-sleep-a-day regime which early morning charter flights from UK provincial airports force upon us we should be busy enough.

On a slight downbeat note, I am a little disappointed that the local representative of our British holiday company speaks no German at all, though she has been based here for a couple of years. Not a bloody word, though this is not an area where English is spoken as widely as in, say, the . She even appears to take a pride in this achievement. Oh well – no point having a national stereotype if we don’t take the chance to reinforce it now and then, though it does seem a bit like employing a man with no arms as a goalkeeper. I must say that the British tourists here are well looked after, but we seem to be expected somehow to be a bit dim. Very like Americans used to be regarded in when I used to go there years ago.