Janitors of the Guard

Goya very kindly gave me these chaps some weeks ago - three odd figures from the collection of my late Edinburgh friend and erstwhile wargame opponent, Peter Gouldesbrough. They are, as you see, French engineers - Peter converted these from Hinton Hunt French line artillery gunners. I never saw his 20mm armies in their glory, since he had moved on to 5mm by the time I met him. 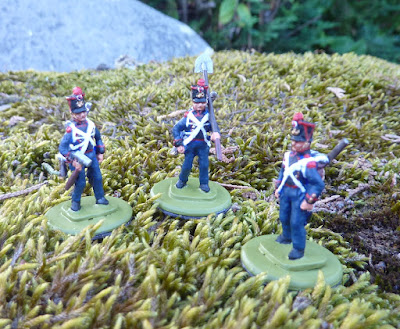 I have smartened them up a little (I hope you can tell). I guess Peter probably painted these around 1968-70, and he didn't really believe much in varnish, so there was some touching-up required to get them ready for duty. I thought they looked a bit like janitors, with the home-made hammer and shovel - ideally the third fellow should have had a bucket of sawdust. So they are currently known here as les Concierges de la Garde.

Of course, they are nothing of the sort. These are regular line engineers - I also have some more sappers and miners to paint up for the French Siege Train box, but they are all in full cuirass and helmet order - I didn't have any in campaign dress until now.

Peter had something of an Impressionist painting style - I've deliberately tidied them up a bit. I think he might disapprove of my painting, but he would be pleased that his boys are still around to cope with the odd job. Anyway, they're fun and I'm pleased with them. If you need any shrubs planted, please get in touch.
Posted by MSFoy at 19:54