Back to the River

I've now painted up my demo pieces for the rivers/waterways, and am rather pleased with the results. 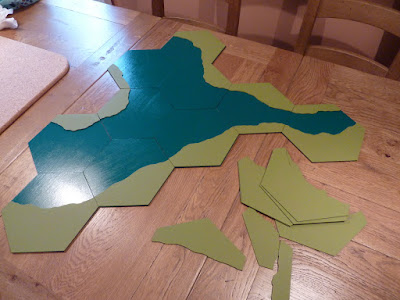 I chose a compromise colour - as mentioned previously, I wish to use these hex tiles mostly as sensible, battlefield-type rivers, but deeper areas such as lakes and coastlines are also within scope. I experimented with various varnish finishes (another compromise - this time between perfection and my natural laziness). I decided that the water will mostly be visible in wiggly, 2-inch wide strips, and even a lake should not be like glass, so I opted for 2 thick coats of gloss varnish, I didn't rub down between coats, and the resulting brush-stroked, imperfect shine has a passable look of a current, or the wind, or something - anyway, it'll do! 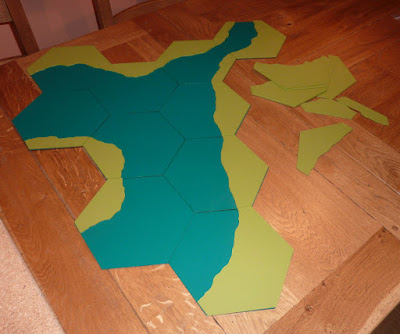 I used clear gloss Ronseal varnish, because it is cheap and should be tough enough to avoid flaking. Though it is water-based, it is still fairly nasty sticky stuff when cleaning brushes, but it's readily available and goes on easily.

Even with just the three basic bank shapes I have available to date (there will be one or more junction pieces in due course, and maybe a couple of small islands), it is possible to play around and create a number of interesting shapes. I hope to get more river pieces to paint up in the next week or so. They store compactly and neatly, too, so I'm pleased. This could go viral - by next Christmas you could be the only kid in your gang that isn't playing at rivers

I still have to arrange for a couple of fords (just water tiles which show some colour variation, I think). And, of course, now I have established a system, I can give some thought to an alternative river colour for the other side of the water tiles...!


For no real reason, other than the fact that I like it, here's a loosely-linked music clip. I got a bit distracted, wondering whether David Byrne's suit would remain stationary if he spun round on the spot, but I guess not. It is nice for us Wallace and Gromit fans to see a pair of tribute Wrong Trousers, though, and any Al Green song is usually worth a listen.