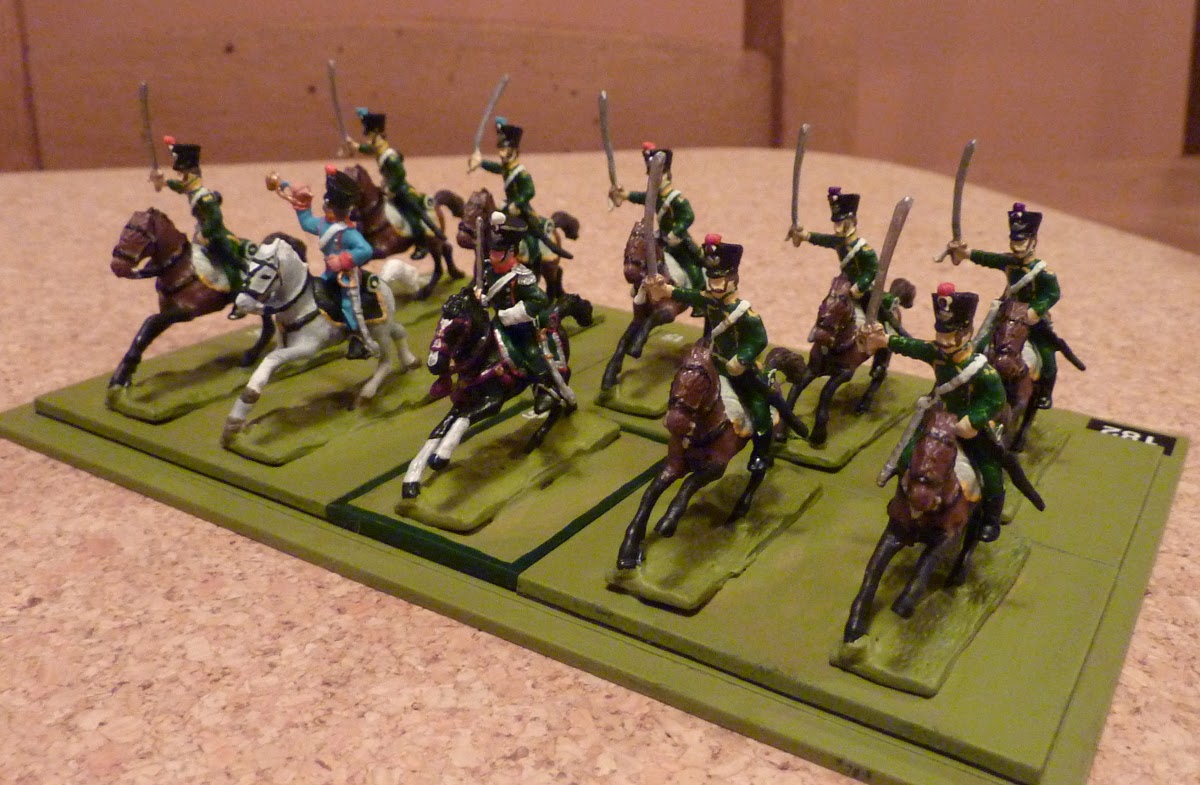 I've stated here, quite recently, that refurbing old, bought-in, pre-painted figures is mostly more grief than it is worth - unless, of course, there is some particular reason to go down that path. The results are rarely as good as I had hoped, the amount of labour is invariably far more than expected, and so on.

Well, I've been doing some more, despite all the lofty theory. 20mm French line Chasseurs are a rare find - apart from Hinton Hunt and Qualiticast (neither of which is around in sufficient quantities to keep prices down), the best traditional stand-by is the early (20mm) Garrison casting, which can still be found on eBay, and can be very useful if the figures are in good nick. I can never get enough Chasseurs, so I have a quantity of the old Garrisons in my spares box, waiting to be smartened up to take their place in the line.

Today's restored unit is the 15eme Chasseurs. They are certainly not beautiful, but the troopers were passable when I first got them, and their previous history was prestigious enough for me to wish to keep them as is, with basic retouching of chips, new varnish and the official-issue bases and sabot. Sometimes, for reasons which are not clear even to me, it seems right to leave things alone if possible. I've even left the rather faded orange facings and the oversized Garrison swords. These fellows must have been first painted in the late 1960s, I reckon.

One problem, of course, is that Garrison did not do command figures, so my improvised officer and trumpeter are both modern Kennington line Chevauxlegers-Lanciers, with spare Garrison heads fitted, mounted on Garrison horses. The resulting conversions are a little shorter than their colleagues, but their hats match beautifully, so they must be the right size... 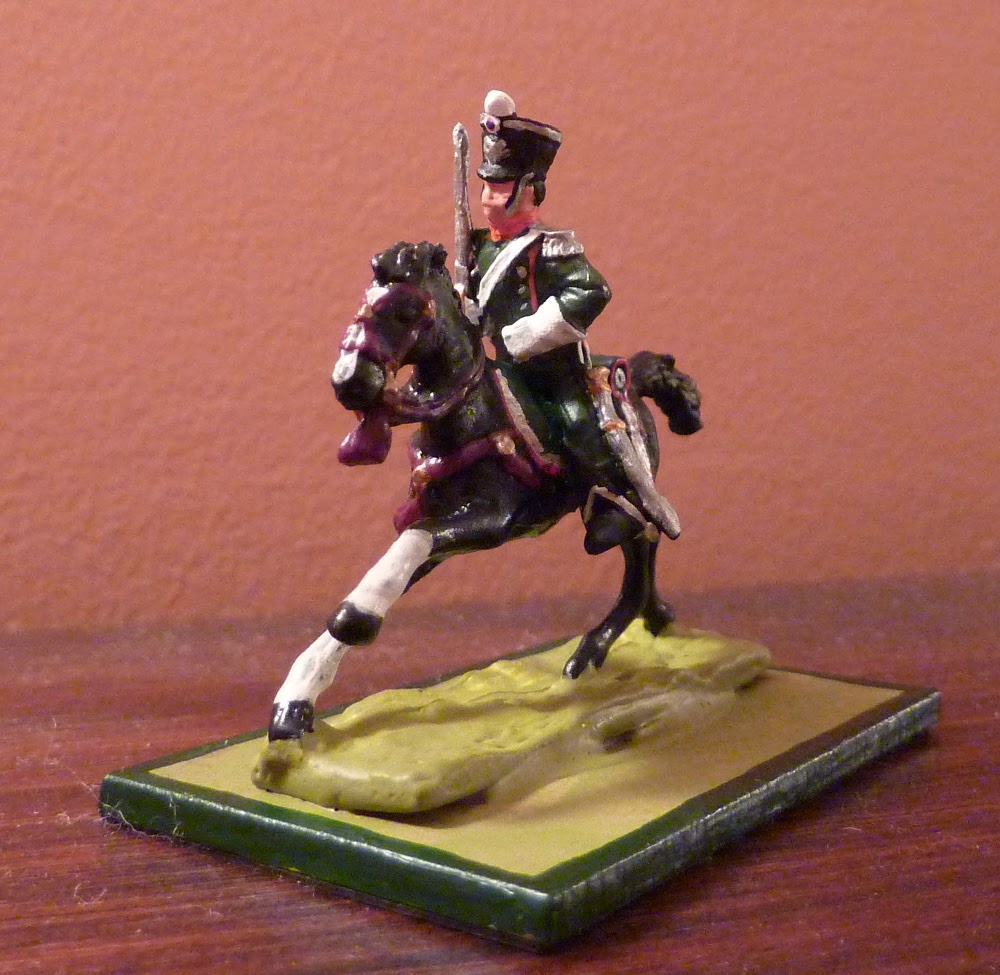 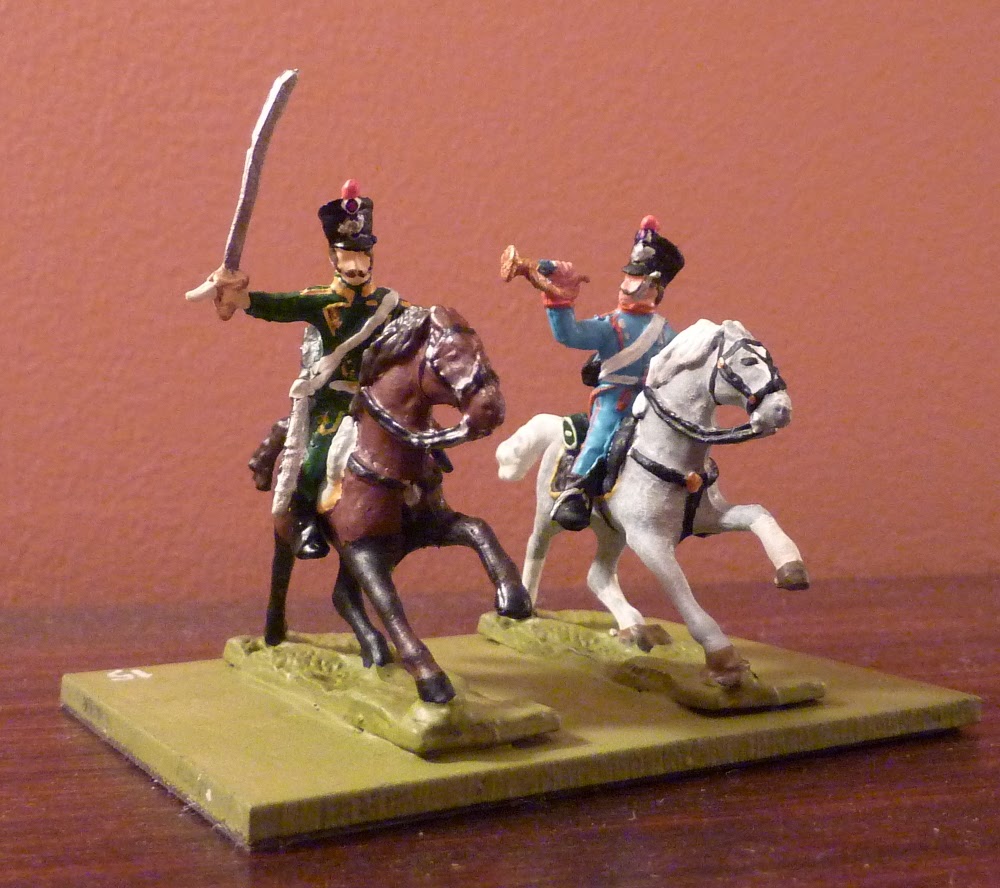 The 15eme (and the 14eme, who may or may not appear eventually) have been pencilled into my official Grand Plan OOB for some years, nagging away at me, since I have been aware that they have been sitting in the boxes waiting for a place in the painting queue. Well, they're finally done - quite satisfying, really. The flaky trumpeter in sky blue is correct, by the way.
Posted by MSFoy at 16:53